Minneapolis elections officials are finding few problems and reporting a steady turnout during Tuesday’s municipal elections — only the second time the city has used ranked-choice voting.

The only glitch he could think of was that the phones didn’t work correctly at city elections headquarters for a short period this morning.

One election judge told MinnPost he found the new voting machines difficult to use, especially for older voters and new immigrants, saying it was an issue of “not programming it in a logical way.” But Carl said that’s the opposite of what he’s heard from election judges across the city.

“I would say that’s a fluke of a judge who just doesn’t have a lot of experience with the machine,” Carl said. “It’s actually much more intuitive and friendly than the old one.”

He said early reports show that voters seem to understand ranked-choice voting, and he encouraged residents who haven’t voted yet to examine the educational material the city sent out before going to the polls.

The election has produced a crowded field of 35 mayoral candidates and several intense City Council races.

Carl said there have been some hotspots in wards 3, 6 and 8, which include downtown, the Cedar-Riverside community and Uptown, “just in terms of high turnout and language translation needs and that kind of support.”

From first reports, there appears anecdotally to be a higher number of spoiled ballots this year.

“I would not be surprised if there was a high rate of spoilage at the end of the night, just because of how long the ballot is, but hopefully all voters know, if you do make a mistake, you give it to an election judge and you get a new ballot,” Carl said.

But, unlike the massive turnout and logistical problems that hampered voters during the  2012 presidential election, he foresees no other problems.

“I think the rest of the day will go smoothly,” Carl said. “I think it will continue to be a steady turnout in all the precincts — all 117 will have a steady turnout. We’ll have a little bit of a bump after 5 [p.m.] as people go home from work and maybe a little bump right before 8 o’clock at the end, but otherwise I expect it to be just kind of a steady turnout throughout the day.” 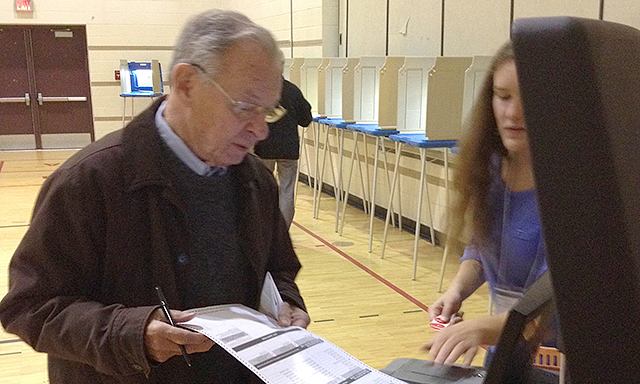 Carl was reluctant to predict total turnout but said a typical municipal election attracts 35 to 45 percent of voters. The city had about 234,000 pre-registered voters as of Nov. 3.

“I’ll tell you, election administrators everywhere learn the rule that those people who want to live by making predictions have to be able to eat glass at the end when they’re wrong,” he said. “Because I don’t like eating glass, I never make predictions.”

One of the hotspots that Carl brought up was the Cedar-Riverside Community. The Brian Coyle Community Center, located in a hotbed of support for Ward 6 council candidate Abdi Warsame, was buzzing Tuesday morning.

Voters trickled in and out of the building steadily. Supporters stood across the street waving signs and encouraging residents to vote.

Fadeema Ahmed, who ranked all three mayoral candidates, said she likes the new voting system. There was an issue with the voting machine, she said, but polling place staff were able to assist her quickly.

“There wasn’t even waiting,” she said. “It was better than last year” during the presidential election.

Adan Dolaal, who voted shortly before Ahmed, agreed that ranked-choice voting was not an issue. He also chose three mayoral candidates and said he came prepared.

“The system the way I see it is all right,” he said. “This was the best experience so far.”

“At this point, it’s a lot quieter than it was last time,” he said. “It may get busier later on but so far so good.” 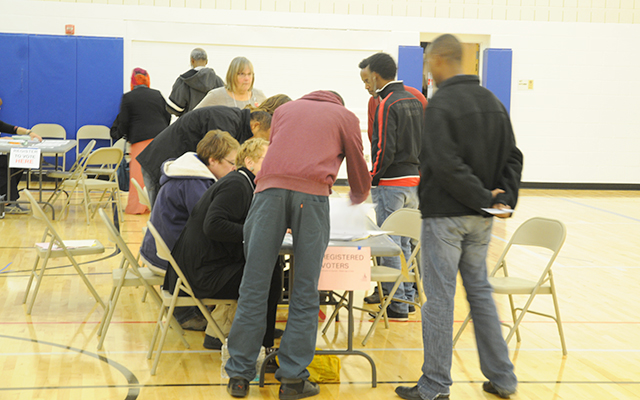 Things got off to a quicker start in a Betsy Hodges stronghold of South Minneapolis near Lake Harriet. Ward 13, Precinct 4, head election judge Paula Bergs said that by about 2 p.m., her location had received 667 out of 2,727 pre-registered voters.

Bergs said voters could take materials to the booth with them and said that nobody had asked an election judge for assistance while filling out a ballot.

“I think it’s been amazingly smooth,” she said. “It has really worked well.”

Dan and Trudy Thompson, who voted there at the Pershing Recreation Center, agreed that ranked-choice voting was simple and said they came prepared by reading the city information and following the issue in the newspaper.

Both chose Don Samuels as their first choice and then put in “some of the bogus ones for the rest,” Trudy Thompson said. Both said they wrote in Capt. Jack Sparrow for third place.

At the polling place at Parkway United Church of Christ in North Minneapolis, John Elsing agreed that he had no issues with voting and didn’t have to wait.

Elsing, though, only filled out his first choice for mayor, Cam Winton, who is an independent. He didn’t appear to like any of the DFL candidates for the job, adding, “I sure don’t want what we had in the last mayor.”

“I’ve been here for 19 years,” Johnson said. “Last year we had nonstop with the presidential election. This year is slow but steady.”

“People have seemed to grasp [ranked-choice voting] a lot more than I anticipated,” he added. “I am surprised how well the public has adapted.”

Carl said the city has made a lot of changes to elections procedures since the 2012 debacle.

“We’ve spent the entire last year making process improvements and changes and refinements and tweaks, and we’ve implemented new processes and new trainings and new equipment, so it’s been a year of ‘new’ for us, and I think it’s going to pay off,” he said.