There’s no doubt that the Minnesota Orchestral Association has been on a money-losing, unsustainable path for years, leaders of Save Our Symphony Minnesota said at a public meeting Wednesday night.

But, in the next breath, those same speakers accused MOA management and leaders of the board of directors of either incompetence and deceit, or both.

In a graph-filled presentation (PDF), Save Our Symphony Vice Chairman Jonathan Eisenberg and Treasurer Mariellen Jacobson called on MOA leadership to be replaced and called for the governor, state auditor, the state’s attorney general, as well as Minneapolis officials, to investigate financial operations of the MOA.

This was heavy-duty stuff, delivered coolly to an audience of about 100 people at a hall at the Open Book store on the edge of downtown Minneapolis.

It should be noted that the MOA was left in a dicey spot late last night and early this morning. It was asked to respond to a wide range of SOS claims and charges in a very short time.

The MOA  did dispute — or ho-hum as old news — many of the SOS points.

Of course, in the end, only one thing is clear: Orchestra Hall remains  empty.

Most of what was discussed  at the Wednesday evening meeting has been published at various times by various media outlets. But much of the information had come out in bits and pieces. This was a compilation of data — mostly using MOA numbers — combined with a call for the political leaders to get involved.

(Despite the SOS hope of political action, Sen. John Marty was the only pol in the crowd. After watching the whole presentation, he became convinced that the MOA is blinded by the ideology that unions are bad and therefore must be “crushed.”)

Save Our Symphony is one of the groups that has sprung up in the wake of the MOA’s lockout of Minnesota Orchestra musicians, a lockout that has gone on for 14 months with no end in sight.

Yes, SOS says, the MOA has been “excessively” relying on its endowment for years.  But that’s just a small part of a larger problem, SOS leaders say.

Certainly, they don’t believe this lockout — and the negative public-relations campaign toward musicians — will solve any problems.

SOS leaders believe that as long as Michael Henson is the MOA’s  chief executive officer and Jon Campbell and Richard Davis have key leadership spots on the board, there’s virtually no chance of a settlement.

The MOA continues to say that it’s the musicians who have refused to negotiate and that its management is ready and willing to bargain.

“The Board remains the party that is willing to talk and is clearly open to compromise, having already significantly altered its original negotiating position,” the MOA said in a statement issued this morning.

But, of course, just who is willing to compromise is  disputed. SOS says it’s necessary to end the lockout now and that both sides should agree to meet with a mediator, either George Mitchell or someone else. (The MOA rejected a temporary settlement suggested by Mitchell, a resolution musicians were willing to accept.)

If there’s restlessness among classical music lovers in the region about this unending matter, that restlessness does not seem to carry over to the MOA’s board. It appears there’s been no pressure from within the MOA’s massive board  to demand a shakeup at the top.

Board seems loyal to leaders

The board members seem to support the MOA’s leadership position — that the only way to save the orchestra is to get large paycuts from the musicians now, even if that means losing  the “world class” status the orchestra had achieved.

SOS Minnesota leaders, however, believe that there are more productive ways to balance the budget, which has been out of whack for more than a decade.

Yes, musicians may have to take cuts.

But SOS contends that management has created many of the financial problems. It has cut the number of concert performances from 85 in 2002 to just 49 that were scheduled for the 2013 season. The steady decline of classical concerts has meant, not surprising, a steady decline in concert revenue.

MOA says there’s a simple reason for the reduction in concerts. There’s been a reduction in demand from the ticket-buying public.

“In recent years, the Orchestra has deliberately and strategically reduced its number of classical concerts to better match supply with demand,” the MOA said in a statement. “Our aim is to find the right balance of concerts to increase our total capacity sold and overall net returns and we’ve been successful in doing this.”

Additionally, in the name of saving money, current management cut marketing staff and its advertising budget, which SOS believes led to attendance declines. Under Henson, it appears the donor pool, so crucial to the survival of any arts organization, has shrunk from more than 20,000 donors to about 2,800, according to SOS.

The MOA disputes the SOS donor base numbers. Management says the donor base actually increased slightly since Henson’s arrival in 2008 and now stands at about 7,800.

But the MOA says that Henson is actually in the process of rebuidling the donor pool. 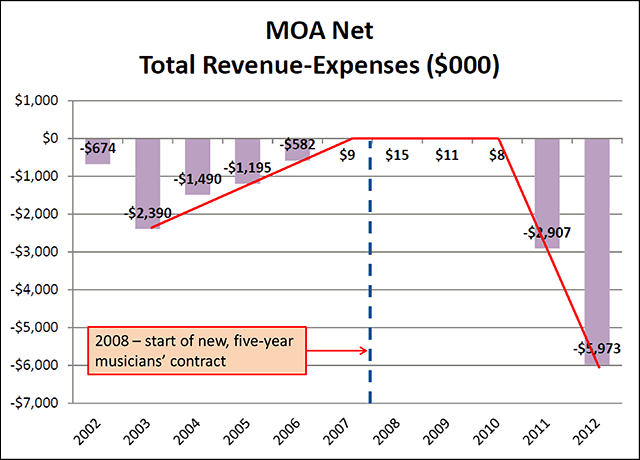 Source: Save Our Symphony Minnesota

Using a study compiled by another citizen group that has formed around the lockout, Orchestrate Excellence, the money-raising performance of MOA leadership has been woeful, compared with fundraising done in Cleveland on behalf of the Cleveland Orchestra.

Donors in Cleveland have given at almost double the rate of Twin Cities donors. Performances by the Cleveland Orchestra have generated  2.5 times the revenue generated by performances of the Minnesota Orchestra. Advertising dollars, the group says, have been spent more effectively.

Again, SOS’s Eisenberg doesn’t deny that the Minnesota Orchestra may have a $6 million hole in its  annual budget.

“We can solve that problem,” Eisenberg said. “In this market, $6 million is not that much money.”

Beyond finances, trust is big issue

Of all the issues, the big issue that must be resolved, Eisenberg said, is trust. He believes current MOA leadership has lost any claim to trust.

It is the belief of SOS that public officials should feel compelled to step into this mess because they were “deceived” by MOA leadership.

When the MOA wanted the state — and indirectly the city of Minneapolis — to come up with $14 million in bond money for the renovation of Orchestra Hall, the MOA had a set of numbers that showed a balanced budget. Two years later, when it wanted to justify its lockout, the MOA suddenly was claiming it was bleeding red ink.

“Financial statement manipulation,” said Eisenberg of the MOA’s easy switch from black ink to red. They had “good numbers when they need to look good and bad when they needed to look bad.”

It is the public on the hook for the bonds. But it is the pols who accepted the MOA’s rosy financial promises.

This charge, of course, brings strong denials from the MOA, and it says that the legislative auditor already has studied, and given a nod of approval,  to the numbers used when the MOA was at the Capitol in search of bond funding.

It is Eisenberg’s belief that the whole concept of a $50-plus-million renovation of the Hall was an effort that has undercut the orchestra and set the stage, perhaps intentionally, for the lockout. Energy was spent hitting up that small donor base for the capital fund at a time when the focus needed to be on building the donor base and the endowment fund.

In fact, the MOA says, the capital fund drive inspired a wide-range of giving in which $98 million of the $110 million has been raised. Of that, $31 million has come from board members.

But the Hall remains empty.