The degree of the good economic news seemed to catch everyone by surprise.

Gov. Mark Dayton and DFL and Republican legislative leaders all were preaching caution with the news of a likely $1.086 billion surplus for the 2014-15 biennium.

All the pols were saying such things as “wait until we see the February forecast’’ and using words like “uncertainty’’ and “caution’’ in describing their reactions to the dazzling forecast, which allows Minnesota government to pay off its debts to schools ($246 million) and an obscure airports fund ($15 million) and still have $825 million left over.

But this forecast doesn’t just make Minnesota debt-free. It is the springboard for the upcoming legislative session and the 2014 elections.

Perhaps rightly, the governor, DFLers and Republicans all can take some credit for a state budget that looks legitimately balanced for the first time in years.

But at the moment, it appears that Republicans, usually so good at simple talking points, are having a more difficult time coming up with a message surrounding these economic times in Minnesota.

The reality is that for a number of years, the GOP message has revolved around gloom and doom.

These are not gloomy economic times.

It’s not just the budget that’s balanced. The state continues to out-perform the nation in most of the economic indicators. Additionally, Minnesota has gained back all the jobs lost during the “great recession,’’ and the state’s new economist, Laura Kalambokidis, suggests that numbers look bright into the future.

(Aside here: On a bitter cold day, the idea that Minnesota outperforms the nation seemed improbable.  How can it be that this place of ice, snow, cold  and high taxes performs so well?

(“We have had and continue to enjoy a broad-based economy,’’ said Management and Budget head James Schowalter. He added that the Minnesota work force remains a state strength.)

Dayton and DFLers already have their messages.

Dayton, for example, said the forecast “confirms that the Minnesota model’’ works. The model, in his mind, means getting high value for relatively high taxes.

But Dayton was quick to add that this isn’t the time for excessive political bragging — or spending.

“Over the years, there have been excessive promises made on both the tax and spending side,’’ the governor said. “We must avoid that trap.’’

GOP leaders seemed to stammer a bit as they addressed the surplus and other positive economic numbers. 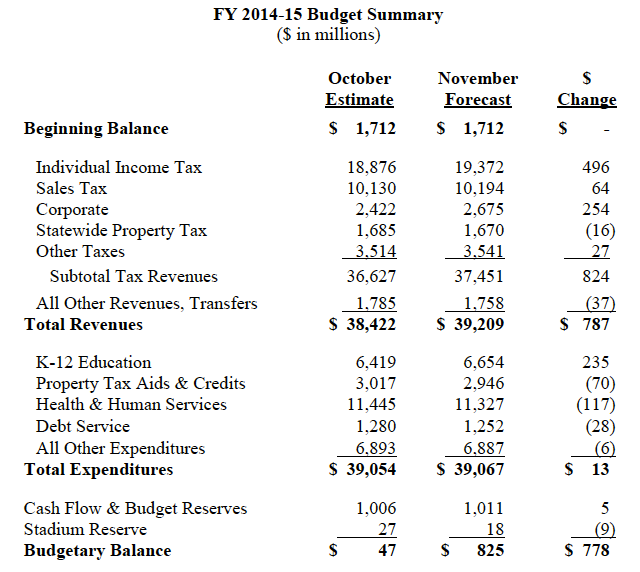 For starters, of course, they believe the GOP should receive credit for the state budget, because of the work of Republican Gov. Tim Pawlenty and GOP legislators.

He  and Senate Minority Leader David Hann had a chart that was supposed to show that this government surplus was simply taken from the pockets of “hard-working Minnesotans.’’

For his part, Daudt was saying that a stunning 49 percent of Minnesotans are either unemployed or under-employed, though it wasn’t clear what he meant by under-employed. (The unemployment rate in the state is 4.8 percent, the lowest since 2007.)

But it isn’t just the “working families’’ the GOP is concerned with. Dayton’s tax-the-rich, fourth-tier income tax also is a dark cloud on the state’s economic horizon.

The GOP released a statement that included this: “Projections of state tax revenue are largely static and do not take into account the full extent of behavior changes that will inevitably result from the Democrats’ tax increases and could reduce the actual revenue generated.’’

This isn’t the stuff of bumper stickers.

Clearly, the GOP has one other message that Minnesotans will be hearing in the coming months: “Obamacare.’’ Both Hann and Daudt were talking — in uncomplimentary terms — about how “Obamacare’’ could throw a monkey wrench into the Minnesota economy.

Some areas of agreement

But it’s also clear there are areas in which the governor and the GOP are in agreement.

Dayton said Thursday he will be looking to eliminate three business-to-business taxes that  were part of last session’s budget bill. Sales taxes were placed on repairs of business equipment, purchases of telecommunications equipment and warehouses. (The warehouse tax was not to be implemented until this spring.)

Hann’s on board with that, although the Republicans are a bit miffed that Dayton has managed to make elimination of those taxes his issue.

Additionally, Dayton said he’d like the middle class to gain “tax breaks’’ by aligning the state and federal tax forms.

Even with the paybacks of the school shift and elimination of those business taxes, there still is expected to be more than $500 million left for the Legislature and the governor to tussle over.

But even when it comes to spending, there are some areas where the GOP and DFL can find agreement. Hann, for example, is fully supportive of a pay increase for personal care attendants.

Of course, there are more projects than dollars. Even a large bonding bill — Dayton could seek as much as $700 million in bonding — would not be enough to cover what the governor considers legitimate bonding requests from across the state.

The inner cities have suffered the most in the hard years of recession. Sen. Jeff Hayden, DFL-Minneapolis, who is a Senate leader, spoke of how when the rest of the state catches a cold, the poor in the inner cities get pneumonia.

But Hayden says he sees signs of hope in some of the hardest-hit neighborhoods. State money focused on all-day kindergarten offers hope, as do some of the “big projects’’ (think Vikings stadium) that require minority hiring.

Needs cross all neighborhoods. Why, just this week, a roof problem led to a ceiling collapse in an unused bedroom at the governor’s mansion.

He doesn’t use that area of the mansion, Dayton said, adding that depending on your political beliefs, that’s a good thing or a bad thing. Either way, the state probably will need to spend some money on the old mansion.

But what’s different about the upcoming session is that for the first time in years, legislators will start with a some money on the table and all debts and shifts and gimmicks paid.

This can be, House Speaker Paul Thissen said, a Legislature that “looks forward, not back.’’