Don’t let Madeleine Baran’s small stature and soft manner of speaking fool you — she’s an outsized journalistic force in the Twin Cities. The Minnesota Public Radio reporter has led MPR’s coverage of clergy sex-abuse within the Archdiocese of St. Paul and Minneapolis, a story she and a team of reporters broke wide open after a fortuitous call to the newsroom one day in July. There’s a reason the call went to Baran. A former mental health worker who earned a graduate degree in journalism and French studies from New York University, Baran has made a name for herself as an investigative journalist since arriving in the Twin Cities in 2009, reporting, among other stories, that Shattuck-St. Mary’s school had not reported a former teacher for sexual abuse of students.  In her words:

Our newsroom got this phone call from [church lawyer] Jennifer [Haselberger], and the phone call was sent to me because I was covering all of these sexual abuse stories and doing investigative reporting. It just started from there.

As soon as she called me I Googled her name while I was on the phone with her and immediately realized that she was someone who had been very highly placed and someone who would very rarely, at least in my experience, reach out to the media. Not knowing much about her really at that point, I was very interested. From there — this is in July — the value of what she had to say and bring to the public just became more and more clear over time. But right away I knew this was the sort of call that I don’t usually get, someone that is going to end up to be this big of a source. 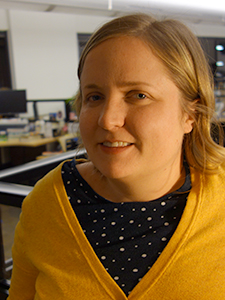 One of the basic questions a reporter asks in situations like this is: How does this compare to other dioceses? To answer that question as early as I could was important. That required a lot of research, because what I didn’t want to do was something that was sensationalistic. I wanted to really understand how the Catholic church in canon law is supposed to deal with this, separate from the issue that the public is concerned about — obviously — about when are the police called and when aren’t they. But I was doing my work so that I could have the most rich conversations and the best understanding of what she was telling me.

I’ve been really fortunate to work in this newsroom for this story. When I talked to my editors very early about this they also recognized the gravity of it, so in that sense it wasn’t a struggle to do the kind of story that I wanted to do. But it became clear really early that the issues that I was writing about, that she was talking to me about, are the most sensitive issues that anyone can talk about. Immediately I realized we would be taking great care with what we are doing, involving, for example, identifying victims and identifying priests. It raises all these kind of complicated questions.

With [Jennifer], what was very clear is that she wants the public to have the information. That was what was important for her, and so far the value of what she has said to us and the reporting we have done has been pretty clear.

This is the kind of thing you, as a reporter, are grateful to be given the opportunity to do. It’s the reason you become a reporter, to tell the public information that is not already in the public domain, and that’s important to people that they wouldn’t already know or might be able to find out by themselves. This whole thing has been a reminder of why I became a journalist to begin with.”