During his 12 years in office, Minneapolis Mayor R.T. Rybak gained a reputation for stage-diving at First Avenue in celebration of pretty much anything. Wednesday night at the downtown Minneapolis music institution, Rybak once again launched himself in the middle of his “denauguration” party (a benefit for Step-Up), and surfed a crowd that included many local politicos, including Minneapolis Mayor-elect Betsy Hodges, Sen. Scott Dibble, Rep. Keith Ellison, Duluth Mayor Don Ness, and St. Paul Mayor Chris Coleman.

“There’s a lot of my sweat on this First Avenue floor,” said Rybak, dancing with friends and family as Dead Man Winter wrapped up the musical portion of the night, which also featured sets from Chastity Brown and DJ Shannon Blowtorch.

“I’ve been around music a lot. I can’t play a lick of anything, but there’s a certain rhythm to this city that you need on a beautiful summer night at the lake or when you’re freezing your butt off; it’s a great refuge. There’s something in the water that makes the music great, I don’t know what it is, but it matters to us.”

For his swan song, Rybak was joined on stage by his wife, Megan O’Hara, and their children, Charlie and Grace. O’Hara read a letter of congratulations from President Barack Obama, and then Rybak took to the mic to thank a roomful of people who were bidding adieu to an unprecedentedly popular and effective mayor, and to make sure the good energy he helped conjure over three terms continues.

“I want to remind you that I am mayor until January 2, at 1:46,” said Rybak, who expressed his admiration for Hodges, Coleman, the people and politicians of Minneapolis, and introduced Kevin Kling as the city’s first-ever “story laureate.”

“Betsy’s going to do a hell of a job, but it’s you, it’s all of you who are able to do these amazing things. Please keep doing things for this city. It is filled with people who have really full lives, who are doing great things, and somehow you stand aside from yourself and say, ‘Someone else matters.’ 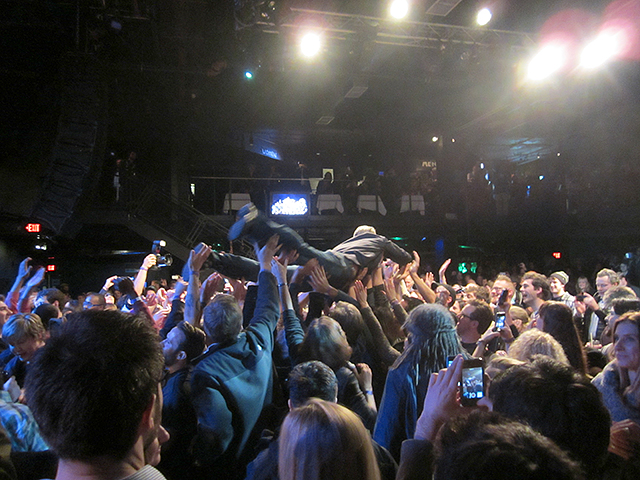 MinnPost photo by Jim Walsh.Following his speech, Mayor Rybak jumped off the stage to crowd-surf one last time.

“That’s what a community is, and there’s no other city that does that better. We have the greatest potential of any community in the world. Keep doing great things, keep loving the city. Thank you, Minneapolis!”

At that, Rybak jumped into the crowd, perhaps for the last time. As the bands played throughout the night, a slideshow of Rybak’s greatest hits played on flat screens throughout First Avenue, and longtime fans took a moment to pay tribute to the man and the moment.

“Who can ask for a better mayor, anywhere? Think about what this city was 12, 14 years ago,” said Brian Balleria, a longtime Southwest Minneapolis resident and Rybak friend, in summing up the feelings of many last night. “The guy has been a cheerleader for the city and just built the city up. Awesome. His heart was in the right place, he had super high energy, and he’d come down here and be a booster for local music, all the time. What more could you want?”