This is part of an occasional series of articles funded by a grant from the Northwest Area Foundation.

Just eight years ago, Minnesota led in the Midwest on the matter of the minimum wage, offering $6.15 per hour to those working for the state’s large employers. Back then, that was about $1 more than most of the state’s closest neighbors.

But that leading position quickly faded in the region and across the nation. When the federal government increased its minimum wage from $5.15 to $7.25 per hour by 2009, neighboring states like North Dakota, South Dakota, Wisconsin and Iowa quickly followed suit. Minnesota’s minimum wage didn’t budge.

Minnesota legislators will renew a debate about increasing the state’s minimum wage at the start of the 2014 session, with House Democrats and Gov. Mark Dayton pushing for a $9.50 per hour wage in Minnesota. Some senators would like to see a lower minimum wage of $7.75 per hour passed this year.

The House position would put Minnesota at the top of the list, paying the highest state minimum wage in the nation. 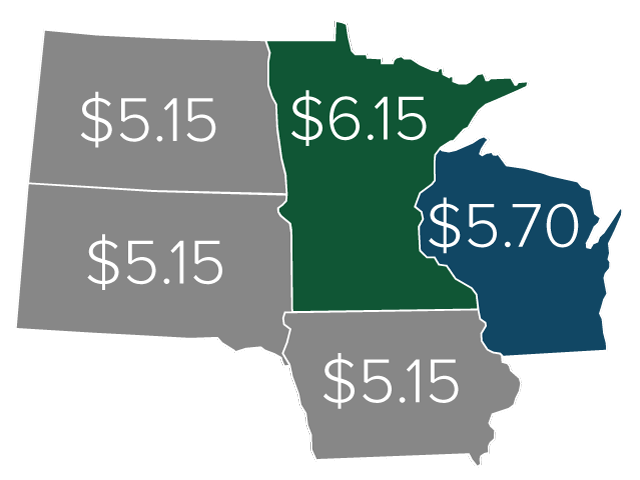 Minnesota led the Midwest in 2006 with a minimum wage rate of $6.15 per hour. The rate had been bumped up an entire dollar during the previous legislative session after a drawn out battle between Democrats who controlled the Senate, House Republicans and GOP Gov. Tim Pawlenty. Democrats called for a $2 increase over several years, but Republicans and business leaders pushed back on that proposal. In the end, the governor agreed to a $1 increase because the wage hadn’t been changed since 1997. 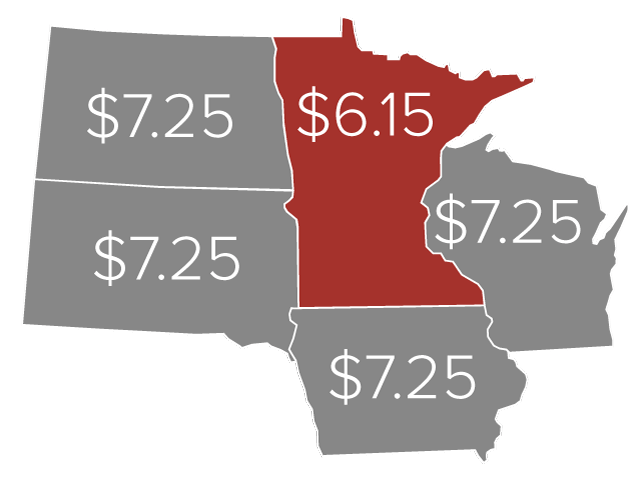 Who works on minimum wage in Minnesota?

Without exemptions, many Minnesota businesses must pay the federal minimum wage. That’s because any business that engages in “interstate commerce” — which can mean simply taking credit cards or using suppliers from out of state – must pay the highest minimum wage offered, either the state or federal.

Source: Minnesota Department of Labor and Industry
Person icon by Jens Tärning from The Noun Project.
About 1 in 20 Minnesota workers earns the minimum wage. Source: Department of Labor
All of Minnesota’s neighboring states have a so-called tip credit, which allows businesses to pay an employee less if they make up the difference in tips.

Advocates of increasing the state’s minimum wage point out that the value of the Minnesota minimum wage fell 30 percent from 1974 to 2013, according to the Department of Labor. That means, in real dollars, minimum wage workers today earn less than they did in 1974. Source: Minnesota Department of Labor and Industry [Page 3]
The real value of both the Minnesota and Federeal minimum wages has declined since the 1970s.

A December 2013 report from the Minnesota Department of Employment and Economic Development (DEED) estimates raising the minimum wage to $9.50 per hour would affect about 461,300 jobs in Minnesota, or about 16 percent of the state’s total workforce. That number is likely to decrease, however, as the economy improves.

But opponents say the border communities are the ones worrying the most. They fear small businesses, unable to absorb the cost of increasing the wage to $9.50 per hour, will pack up and move to a neighboring state.  “All the states around Minnesota are federal conformity states at $7.25,” said Hospitality Minnesota President Dan McElroy, whose group opposes a minimum wage increase without a  “tip-tiered employee” system. “That makes impacts in border cities greater.”

Minimum-wage primer: How Minnesota fell behind Wisconsin and other Midwest states