This article was produced in partnership with students at the University of Minnesota School of Journalism and Mass Communication.

A combination of low vacancy rates, low wages, and a lack of funding in Minneapolis has created one of the worst affordable rental shortages in more than a decade for low-income renters.

“You have to look at the market and understand what it is telling you. The wait-list is a mile long, there’s a low vacancy rate. Obviously there’s a shortage of affordable housing,” said Tom Streitz, director of the Minneapolis Community Planning and Economic Development (CPED) department. “It’s what I would call a cocktail for disaster for extreme need.”

Streitz estimates that the need for affordable housing among low-income renters has more than doubled since 2009, the latest year for which U.S. Housing and Urban Development data exist. That year, about 14,000 low-income Minneapolis renters were without affordable housing.

Since then, rental prices have risen faster than income – especially for low-income residents – and vacancy rates have decreased dramatically. Meanwhile, the city has failed to meet funding goals for its Affordable Housing Trust Fund, and critics say that the bureaucratic process for financing development of low-income rental units makes it difficult to meet the increasing demand.

Though housing experts like Streitz can only estimate the housing shortage based on such factors, other data show a worsening trend that began at least a decade ago.

About 41 percent of low-income renters lived in affordable units in 1999, according to a “OneMinneapolis” report by the Minneapolis Foundation. By 2008-10, that number had plummeted to 20 percent, the report said.

Housing is considered affordable if a household is paying 30 percent or less of its monthly income on mortgage or rent. If housing costs step over that threshold, the share of income that can go toward necessities such as food, medicine, and child care often is inadequate.

“The housing costs keep rising, and they’ve been rising faster than incomes, especially for lower income people. This creates an ever-growing gap between what many people can afford and what is out there in the housing market,” said Edward Goetz, director of the Center for Urban and Regional Affairs at the University of Minnesota.

LaQuita Alexander had been on three waiting lists before recently getting into an affordable apartment. For nearly five years, she bounced around Minneapolis, living for short times in apartments she couldn’t afford or with friends or relatives. She lived in a shelter for nearly three months. At one point she found a subsidized apartment, but she was only allowed there for two years.

The 26-year-old mother of three even looked into moving to North Dakota to find an affordable place, but the waiting list was too long for a nonresident of the state.

“I feel like there should be more affordable places, especially if you have more than one kid,” Alexander said. ”The waiting lists shouldn’t be so long.”

The rental shortage in Minneapolis reflects a national trend. Nearly half of the country’s renters paid more than 30 percent of their income on rent, a 12-percent increase over a decade, according to a Harvard University study.

Minneapolis rental prices rose by 23 percent from 2006 to 2013, while average weekly wages rose just 16 percent in about the same period, according to the city’s Minneapolis Quarterly Trends report. Wages for many lower-paying jobs, such as retail and food service, grew far less than the average.

A renter would need to make nearly $20 per hour to afford the average rental unit in Minneapolis, assuming affordability means spending 30 percent of one’s income on rent. A renter making minimum wage would have to work 110 hours a week.

Meanwhile, rental vacancy rates have dropped from about 7 percent in 2009 to about 2 percent currently. The low rates, signifying high demand, make it hard for those like Alexander to find affordable housing. A healthy rental market – one that strikes a relatively fair balance of supply and demand – is 5 percent, according to Streitz. 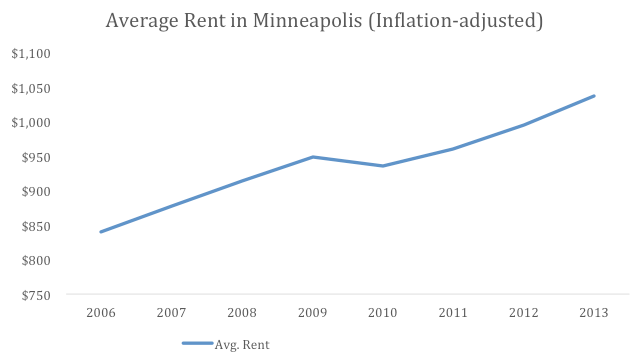 The Minneapolis Public Housing Authority has about 10,000 people on its waiting list; the Section 8 voucher program has more than 9,000 on its waiting list, according to officials. The average wait time is five to 10 years for Section 8, and up to seven years for low-income public housing.

“We have dozens and dozens of people calling and saying that they’re looking for a decent place to stay that’s affordable,” said Alan Arthur, president and CEO of Aeon, which is a Minneapolis-based nonprofit developer, owner and manager of affordable housing. “That’s frustrating and disappointing.”

Barbara McCormick, who directs Project for Pride in Living’s affordable housing program, sees a similar problem. She said the nonprofit is seeing its highest occupancy rates in about 15 years, with little turnover. A telling example, she said, is the 120 names PPL had on the application list for a new 40-unit development.

Key sources of funding for affordable housing have declined in recent years, in large part because of declining federal funding. The city’s main fund is the Affordable Housing Trust Fund, made up mostly of money from federal Community Development Block Grants and the federal HOME Program Fund.

The federal funding to Minneapolis has declined steadily over the past decade, and the money available for affordable housing has declined with it. The city has met its $10-million-per-year funding goal for the Affordable Housing Trust Fund only once since 2005.

Former Minneapolis Mayor R. T. Rybak’s 2014 budget plan allocated only $6.2 million, the majority of which comes from federal funds. However, on Dec. 4 the City Council’s budget committee called for an additional $1.5 million to be added from the city’s development account.

“Given the current situation, we really need to get as close to that [$10 million] number as possible. Minneapolis is being dominated by very high-end development right now,” Streitz said. “When you’re in a city that is growing like Minneapolis, there’s a high demand for land. Nobody wants to build affordable housing on their own.”

The fund, which provides low-interest loans for affordable housing, is often the first place developers look to offset costs.

“We’d do five times, 10 times the number of units a year if we could,” said Aeon CEO Arthur. “But the resources aren’t available.” 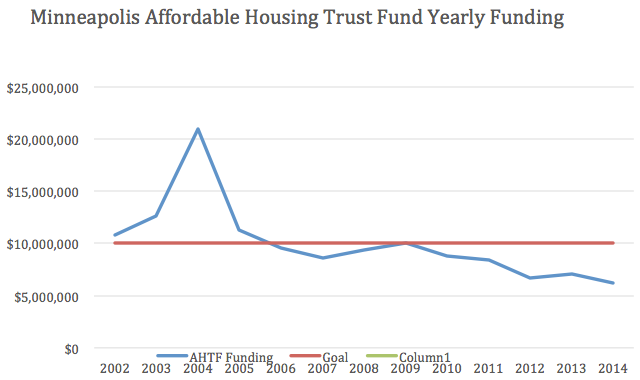 From its creation in 2002 until 2012, the city invested about $73 million in the fund while attracting about $777 million in additional outside investment. The result has been the development of more than 6,000 affordable units.

“I would hate to think what would happen had we not been doing what we’ve been doing for the past 10 years,” Streitz said.

The state, the Metropolitan Council and Hennepin County also provide financial incentives. But developers say the patchwork of funding can create a bureaucracy that slows down development.

“You know you have a problem when it takes three to five years to do 50 units of affordable, quality housing,” Arthur said. “You have too many sources making a deal too complicated.”

Said Streitz: “There’s not enough in any one of those pots by itself to do the deal . . . One of the only ways for that cycle to speed up is for one of those agencies to fully fund a project, and we simply don’t have enough money for that.”

To some who advocate for more access to affordable housing, the root of the problem lies beyond just a lack of funding.

“The housing trust fund for the city of Minneapolis is just a symbol of sentiment, really, of a bigger problem,” Arthur said, “which is a misdirection, a misprioritization of the resources in our community.”

State and federal tax incentives to buy second homes, Arthur said, are examples of a misguided focus. “Other resources should be directed to people who don’t have homes at all.”

U.S. Rep. Keith Ellison introduced a bill in March to address the problem. His legislation would, in part, eliminate tax deductions for mortgages over $500,000 and direct the government savings – estimated at nearly $200 billion over 10 years – to programs addressing the national rental shortage.

The bill has been stalled in committee since March.

In Minneapolis, Mayor-Elect Betsy Hodges ran on a campaign that promised to meet the funding goals of the city’s Affordable Housing Trust Fund. She has support from City Council member John Quincy, who said he’ll continue to advocate for adding money to the trust fund from other city sources.

Streitz said cities must be creative, considering, for instance, setting aside more land for affordable housing, creating incentives for high-density development and making zoning changes. “I think it means that cities have to be much more nimble and creative in how they make resources available for housing,” he said.

Justin Miller is a student at the University of Minnesota School of Journalism and Mass Communication.