The first bicycle lanes separated from vehicles by a curb will be part of the new design of Washington Avenue scheduled to be built in 2015 when the street will get an $8 million makeover for the six blocks starting at Hennepin and going east to the end of the depot at 5th Avenue South.

Currently that stretch of Washington is 110 feet across, with seven lanes of vehicle traffic and sidewalks on both sides of the street that are 10 to 12 feet wide. There are no dedicated bicycle lanes.

The new configuration will also be 110 feet wide but will have six lanes of vehicle traffic with 20 feet of space in each direction for bicycle lanes, pedestrian sidewalks and green space. 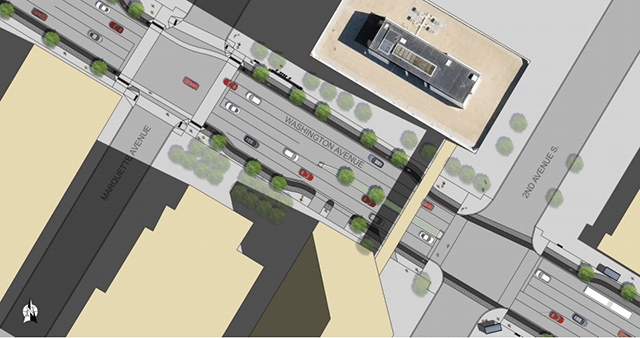 Kimley-Horn and Associates
The new configuration will also be 110 feet wide but will have six lanes of vehicle traffic with 20 feet of space in each direction for bicycle lanes, pedestrian sidewalks and green space.

Despite the enlarged space for non-vehicle traffic, the width of the sidewalks for pedestrians will decrease from the current 10 to 12 feet to just over 7½ feet.  The new design has 2 feet of curb space, a 5-foot-wide bike path, 6 feet of green space and 7½ feet of sidewalk.

“The sidewalks are going to remain pretty narrow for downtown,” said Scott Engel of the Minneapolis Pedestrian Advisory Committee, which recommended the City Council vote against the new design based on sidewalk width and the distances pedestrians will have to travel to get across the street.

“The three-lane westbound design will facilitate fast moving traffic and result in wide, dangerous pedestrian crossings,” said the Pedestrian Committee in its resolution asking the City Council to reject the plan.

The Minneapolis Bicycle Advisory Committee advised the Council to accept the design for Washington Avenue.

“It’s a little bit tough for me because I wish we were doing more to address pedestrian concerns,” said Council Member Cam Gordon as the Transportation and Public Works Committee prepared to vote on the matter. “I’m enthusiastically supportative and impressed by the protective bikeway making it onto the plan.”

“We all know we want a walkable city, we want those sidewalks alive and active,” said Gordon, who voted with other committee members to approve the project and direct city staff to continue working with Hennepin County and the advisory committees on detailed designs for the six-block stretch of Washington.

Funding for the project comes from the Minnesota Department of Transportation.