That a political caucus might turn into a fracas isn’t exactly a new phenomenon.

But what is relatively new this time around is that the political combatants appeared to be mostly — if not entirely — people with Somali roots. And in this case, the fighting appeared to break out before the DFL caucus at the Brian Coyle Center in Minneapolis ever was officially called to order.

Although details remain murky, the dispute, at a superficial level, was over who should hold the gavel at the caucus.

The meeting, the first step in the endorsement process, was supposed to elect 43 delegates who would help determine whether the party supports incumbent Rep. Phyllis Kahn or challenger Mohamud Noor, a Somali recently appointed to the Minneapolis School Board.

Below the surface, though, there seems to be many nuances to Somalis’ growing political activism.

For starters, it’s clear that Somalis are not monolithic in their political support. In this race, for example, both candidates have Somali supporters, although even Kahn acknowledges that Noor likely would get a large share of Somali support.

In recent years, the Somali community in Minneapolis has been extremely active politically — in part because of Somali activists, such as Noor, working with DFL activists, including Kahn.

Beyond that, there apparently are some complicated, deep-rooted tribal differences and contemporary personality differences, not to mention very recent you-scratch-my-back, I’ll-scratch-your-back political alliances.

Last fall, for example, Kahn supported Abdi Warsame, who defeated longtime incumbent Robert Lilligren to become the first Somali elected to the Minneapolis City Council. Warsame, in turn endorsed Kahn, saying she has represented the district, which is about 25 percent Somali, “very well.” Going into the caucus that ended abruptly, Kahn said she would have been happy getting 25 percent of the delegates who were to be chosen to move on to the next round of the endorsement process.

Noor, however, believes Kahn would have received minuscule support.

“I wasn’t there,” said Noor, “but I believe 99 percent of the the 400-plus people who were there were my supporters.’’

If his support was that overwhelming, why would a fight have broken out?

Kahn was present. She was on the verge of giving her two- to five-minute talk that each candidate is allotted, when police arrived.

“Somebody said, ‘You should leave,’ ” said Kahn, “and so I did. People have asked me, ‘Were you in danger?’ The truth is, that never occurred to me.”

Kahn, at 76, has been involved in politics for decades. She understands that things get heated. Fact is, sometimes she’s at the center of the heat, although she says neither she nor her supporters were at the center of this little storm.

Even before she won a seat in the Legislature (in1972), she was participating in DFL caucuses. One, in particular, stands out in her mind. It was 1968, the year of the great DFL party split over the Vietnam War.

“We were at our caucus, and Art Naftalin (then Minneapolis mayor) stood up and said, ‘Somebody should say a good word about Hubert Humphrey,’ ” Kahn recalled of the presidential candidate. “Then, he left the room.”

At the time, Humphrey was seen as a war hawk — and no friend of many of the young activists in the DFL. They mostly were supporting Sen. Eugene McCarthy, a dove on Vietnam.

Once Naftalin left the room, the McCarthy supporters were virtually the only ones left at the caucus.

“But we divided into two groups, and there was a fight over which group was more ‘peaceful,’ ” recalled Kahn.

So, passionate fights — usually verbal — are not uncommon on caucus night.

Kahn is left in a somewhat dicey position in the wake of Tuesday’s halted caucus.

‘Reconvened’ caucus could be complicated

The state party has made it clear that it is working on a way to re-convene the session so that delegates can be elected to the endorsement round.

But it seems clear that Kahn has at least considered playing hardball. She says that under state law, only such natural things as extreme weather can allow for the rescheduling of caucuses.

“Is a bad social climate the same as any other sort of climate?” Kahn asked.

But, she added, she believes that the DFL will say that the caucus is being “continued,” not being re-scheduled. Even such a declaration, however, means technicalities will have to be dealt with.

It is Kahn’s view that only those who were present — and signed in — for Tuesday’s caucus should be allowed to participate in the “continued” caucus. She said she will insist that those participating show identification. MinnPost photo by James Nord
An unidentified woman is handcuffed by police after attempting to defend another woman, who was assaulted at the caucus.

DFLers, you’ll recall, have long fought the idea of requiring voters to show photo IDs at the polling place.

Two years ago, a photo ID and the one-man, one-woman marriage amendment were pushed onto the ballot by Republicans, who controlled both the House and the Senate. Voting on those amendments showed how sophisticated Somali voters are.

Muslim and socially conservative, Somalis supported the marriage amendment by a nearly 2-to-1 margin. But they opposed the photo ID amendment in huge numbers and overall, supported DFLers by nearly 90 percent.

Neither the state DFL nor Kahn is eager to offend Somalis, given their support for the party and their passion.

Look again to the caucuses held in Kahn’s legislative district, which includes the University of Minnesota.  While hundreds of Somalis were gathering at the Coyle Center, Kahn said there were a total of five people who showed up at two precinct caucuses at the University.

Kahn, who along with other state legislators worked to get out the vote in Somali neighborhoods in the elections of 2012, said there was so much political excitement among Somali organizers in Minneapolis two years ago that they also made calls into many suburban areas to get out the vote.

Those scattered Somali votes in the suburbs, Kahn said, may have been crucial to the DFL taking control of the Legislature in 2012.

It does seem that Somalis — and other East Africans — have organized more quickly than other immigrant groups.

“I can’t tell you why that is,” said Ken Martin, the DFL Party chair. “I do know that we’ve been organizing for years.” 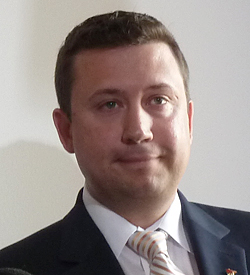 Noor, who was defeated by Kari Dziedzic in a special election for the Senate seat vacated by Larry Pogemiller in 2011, says he can’t say why the Somalis have seemed quicker to organize.

“I don’t know about the others,” he said. “I do know that we understand it’s important to be a part of the process.”

Likely the high density of Somalis in a relatively small area has been a catalyst in creating political activism and clout.

Certainly, redistricting in 2012 played a significant role in Warsame’s City Council race. Redistricting packed most of the Somali community in a new Ward 6.

Tight neighborhoods supporting one of their own is an old immigrant formula in politics, such a political scientist as Ryan Allen, a professor at the Humphrey Center, has written.

The legislative district that Kahn and Noor are competing for does not give Noor nearly that sort of a demographic advantage. In fact, following the Tuesday night caucuses, Kahn believes she has come close to gaining endorsement for herself.

Noor, who once said he would abide by the endorsement, now is contemplating pushing Kahn to a primary.

For her part, Kahn seems energized by the fracas at the caucus.

She said she has heard herself being referred to “as the old white woman.”

Her response: “But I tell them: ‘If you think I’m too old, too tired, take me on in the next Twin Cities Marathon.’ ”