Moments before the Dalai Lama took the stage at the Minneapolis Convention Center Saturday morning to deliver his opening keynote speech for the Nobel Peace Prize Forum, Russian troops invaded Ukraine in what most of the planet considers a declaration of war. At the same time, a new wave of violent protests against the Venezuelan government choked the streets of Caracas, and in North Minneapolis, mourners gathered to say goodbye to five children who were killed in a tragic house fire last month.

Just three reasons why, when asked by an audience member to sum up the world in one word, the 78–year-old holy man replied, “Complicated.”

Far from the seemingly endless travails of the world, and yet not, the Dalai Lama spent the weekend in Minneapolis and St. Paul, spreading as much love, compassion, empathy and inspiration as one man of peace can. Saturday he was at the Convention Center; Sunday morning he was the featured event at an Augsburg College-sponsored celebration of the Tibetan New Year, and Sunday afternoon he addressed students, faculty and staff of Macalester College on “The Nature of Happiness, Fulfillment, and Embodiment.”

All told, a total of 9,000 Minnesotans took in the Dalai Lama’s words, which repeatedly stressed an urgent agenda of love, compassion, oneness, peace, the inner life and a reimagining of the world that starts in the individual heart and ripples out to our fellow man, woman, child, animal, plant.

Throughout the weekend, the self-described “simple Tibetan monk” was serious, warm, impish, funny, irreverent, extremely present, and reminded all comers that there are 7 billion people on the planet, and that we all have to look out for one another.

“Brothers and sisters, wherever I go, whoever I meet, I remember that we are all the same physically, mentally and emotionally,” he began Saturday morning.

“From my own experience when I was younger, I know to focus on such differences on my being a Tibetan, a Buddhist and even the Dalai Lama creates anxiety. It can lead to pretentiousness and hypocrisy.

“Gradually I came to realize that on a basic level of reality, we are all the same as human beings. When we focus on the secondary differences that distinguish us, we rapidly decline into a sense of ‘us’ and ‘them,’ which easily leads to cheating, exploitation and even killing one another. Each one of the 7 billion human beings alive today depends on the rest of humanity. If humanity is happy and prosperous, each human being benefits.”

Yet happiness, love and peace are ongoing challenges for so many humans. Which led another questioner to ask, via moderator Cathy Wurzer, “For decades you have brought a message of love and peace, yet our world is harsh and spurns love as weakness. What is the wellspring that allows you to transcend despair?”

“There is no other choice,” he said, after a meditative beat, to laughs and cheers. “Optimistic attitude, not foolishly, but holistically, is a major factor to keep your mind fresh. Even your physical health [benefits]. So if you want to die soon, then meditate on pessimism.” 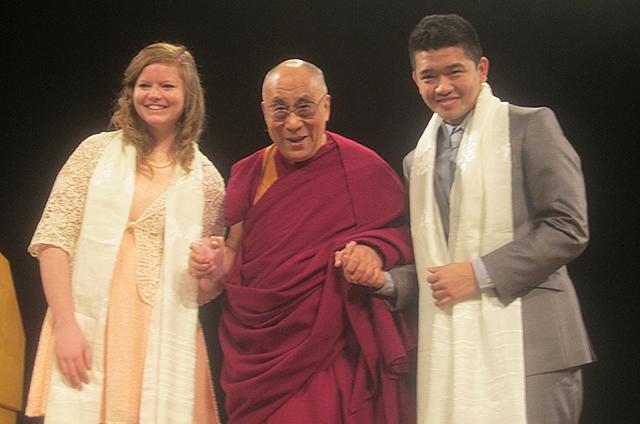 Sunday’s program at Macalester began with a moment of silence for the three Carleton College students killed in a car accident over the weekend, which only put an exclamation point on the message of the day that life is short, and precious. To a hushed and reverent throng of 3,500, the Dalai Lama pointedly challenged the private college kids before him to move the world from the old violent and ways of the 20th century into the 21st century.

“Education is, yes, good but it can cause ambition and anxiety, so [be sure] to have [an] inner life,” he said. “You are the real shaping of the new world. This is just the beginning of the 21st century. So many ideas yet to come. The 20th century has [seen] too much bloodshed, too much violence, too much suffering. I think the very nature of violence is a chain reaction: violence after violence and like that.”

In parting, he implored his “young brothers and young sisters” to take up the torch from his “old and tired” generation and make the world a more loving place. When it was done, after a standing ovation, the Dalai Lama left the stage and soon after the state, but the love he spread, and his reminder to remain open-hearted and kind, won’t be forgotten in Minnesota anytime soon. 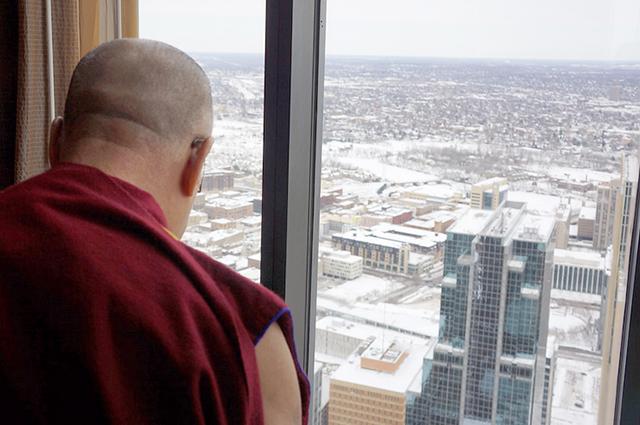 Courtesy of His Holiness The Dalai Lama
The Dalai Lama considers the nine-below-zero Minneapolis skyline Saturday afternoon from his hotel room.

The Dalai Lama on staying optimistic in troubled times: ‘There is no other choice’