The moratorium on teardowns and large remodeling projects will continue in five southwest Minneapolis neighborhoods, but a Zoning and Planning Committee vote on the matter has been delayed for two weeks.

“Clearly we don’t need a moratorium in place so the city can do its job,” said Council Member Lisa Goodman following more than two hours of public testimony on the controversial subject.

The extra time will give city staff an opportunity to solve some of the neighborhoods’ construction-related problems and perhaps negate the need for the yearlong moratorium.

“We know there is a real sense of urgency,” said Jason Wittenberg, manager of land use for Minneapolis, during Thursday’s public hearing. “We think the issues that don’t require ordinance changes, including some of the construction site management issues, can be addressed relatively quickly.”

One of the reasons for the moratorium was to allow the city to study development-related issues without additional projects creating new problems.

“I realize that a moratorium carries a cost, but so does the status quo,” said Council Member Linea Palmisano, who represents the five neighborhoods.

Last year, wrecking permits increased by 117 percent in that area, and there are currently 80 active construction projects.

“This argument is not about adding density to the 13the ward,” said Palmisano. “It’s about intense construction in an already-built environment.”

A March 7 vote by council members meeting as a Committee of the Whole approved an interim moratorium stopping demolition, new construction of single-family and two-family residential dwellings and remodeling projects in excess of 1,500 square feet. The moratorium blocks any project in the five neighborhoods that wasn’t issued a permit issued before the committee vote.

Fears of flood of permit requests 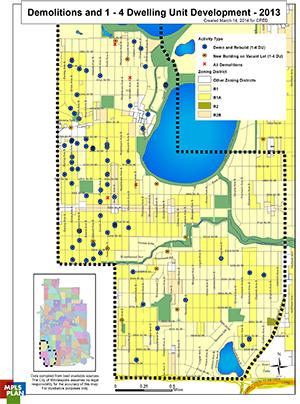 Interim ordinances allow a vote without the usual advance notice. Supporters of the action say advance notice would have flooded the building-permit process with requests from developers eager to beat the deadline.

“Every reasonable person understands that construction sites are messy and there’s a level of noise produced,” said Wittenberg. “I think there has been a level of carelessness by some builders — absolutely not all builders — that has created a situation that neighboring people should not have to tolerate.”

He cited such issues as construction materials left in the street or parkways, portable toilets adjacent to or on sidewalks, and trash containers blocking the streets.

Neighbors also have complained that traditional neighborhood bungalows have been razed and frequently replaced by large two-story homes that look out of place in an urban setting. Currently, the size of new construction is dictated by lot size with no requirement that the new building blend in with the surrounding homes.

Residents on both sides, as well as representatives of the business community, made their views known at Thursday’s hearing.

“I currently live in the dark next to a house that looks like it belongs in Plymouth,” said Mike Anderson of the neighboring structure. “They have removed all of the trees. It has definitely affected the value of my house.”

Anderson said that during demolition one wall of the house fell on his house. He also said that he finds nails left behind in the alley and that access to his home is sometimes blocked.

“Then on the other side, I live next to a 25-foot hole that is unprotected and has been sitting there for six months,” said Anderson. “There has to be a better way than what I’m seeing.”

“One of my concerns is the incredibly bad behavior by developers,” said another resident, Sarah Peterson, who told how plants and trees have been removed from her property by the builders. “These are city lots. These are smaller lots. They have to work within those lot lines. They do not.”

“The moratorium shut down everyone, those who follow the rules and those who don’t,” said Cathy Hendrickson, who has lived in southwest Minneapolis since 2001. She has spent much of that time looking for a home to rebuild. She finally found the home, hired an  architect — and then came the moratorium.

“This has been eight years in the works,” she said.”We were three weeks from pulling permits and you have shut us down. It’s not fair.”

Another view: “The owner … bought the house next to me for $110,000 in 1998 and has been rebuilding it for 16 years this May,” said Consuelo Graven. For the record, she favors the moratorium but would like to see some progress next door.

“The house is not yet habitable or inhabited” she said. “My neighbors call it ‘the forever house.’ ”

A “forever house” was what Amy Gustafson was planning to build on the site of a home she has owned for 14 years. She gave notice to the tenants there and started to move ahead with plans. Then she heard from her neighbors.

“I’m getting attacked by neighbors who are pro-moratorium and feel they have a right to say things about my property and what I should build and what it should look like and how big it should be,” said Gustafson, adding that she is now stuck with a home she can’t rent out at a time when she can’t move ahead with her plans.

In some ways, the new construction has created a two-class society in the five neighborhoods: Those who live in older homes and those who have spent the money to build and remodel.

There were also complaints about the moratorium from members of the business community who have come through the economic downturn and were looking forward to a new surge in real estate and construction business. 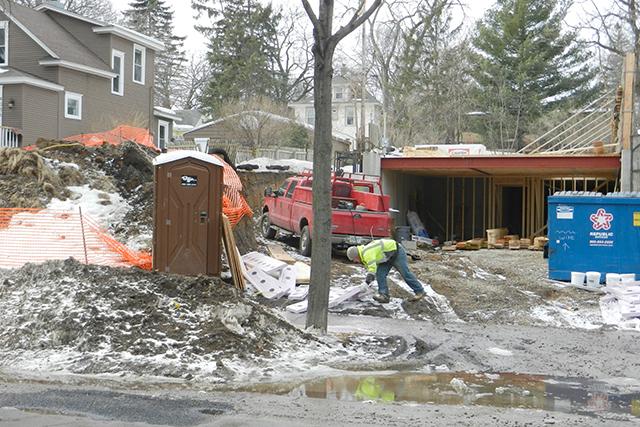 MinnPost photo by Karen Boros
There were also complaints about the moratorium from members of the business community who have come through the economic downturn and were looking forward to a new surge in real estate and construction business.

“Over the past five or six years, as well you may know, the construction industry has been devastated,” said Pat Wells, who supplies construction materials to builders. “Now the industry is finally coming back and now the moratorium is going to take that away from us.”

After the public hearing, Palmisano said of community attention to the issue: “This has brought people to the table, it has been an all-hands-on-deck moment. This is about our ability to live, work and play in this community.”

If the Zoning and Planning Committee votes April 3 to adopt the yearlong moratorium, the matter would come before the full council April 11.