All was as it used to be. The Minnesota Orchestra, under the direction of Osmo Vänskä, performed in Orchestra Hall Thursday.

The orchestra, playing the Sibelius symphonies that led to a Grammy Award, was wonderful. The audience — it appeared to be a full house — was thrilled.

Vänskä did not speak to the audience, but he bowed his appreciation and he hugged every musician in sight and later signed autographs on CDs for a long line of  music lovers.

Everybody who sought an autograph, had essentially the same comment.

But it seems clear he wants to come back.

After the emotionally charged concert, after the autographs, Vänskä was in his studio, talking about what surprised him. It wasn’t the concert itself; it wasn’t even the warm welcome.

What surprised him most was an event earlier in the week. The players and Vänskä were starting rehearsals for the performances that will run through the weekend. Nobody really knew what to expect.

“What surprised me  was the attitude [of the musicians],’’ Vänskä said. “So much had happened over the last 16 months but to come to that first rehearsal and be ready to work, that was wonderful.’’

That let’s-get-to-work attitude is what created the unique chemistry between Vänskä and the musicians. It was that attitude and a lot of talented people that combined to create an orchestra that was considered among the elite in the U.S. and beyond, before the lockout.

No one was sure if that could be replicated after all the emotion that came with the lockout.

But the rehearsal, Vänskä said, was a hopeful sign that overcoming the loss of some key musicians and anger surrounding the lockout is possible.

“None of the other things [from the lockout] was there,’’ he said of that rehearsal. “The players and me — we’re one unit.’’

Tony Ross, the principal cellist, was making similar comments as he walked through the lobby after the concert. There’s something unique about the fit of Vänskä and the musicians.

“I’m not talking about love or even like,’’ said Ross of the musicians’ relationship with Vänskä. “I’m talking about how we work together. There’s a special respect.’’

Ross is a key part of the future. By mid-April, he will decide whether to stay with the orchestra or move to become principal cellist of Chicago’s Lyric Opera.

Ross is a special sort of superstar.

When, during the lockout, the musicians put together a series of concerts, Ross took to wandering through the lobbies of the various venues, greeting those coming to the concerts and then wandering among the patrons after concerts to shake hands and to chat.

He was at it again Thursday. Ross and a handful of other musicians wandered through the newly renovated Orchestra Hall foyer before the concert, thanking people for coming. Ross returned post-concert for more time with people who buy the tickets. It’s a habit he plans to continue.

“This was an emotionally charged concert,’’ Ross said after the concert. “We knew it would be.’’

Ross wasn’t talking about the emotion of the audience, which was powerful.

He was talking about the emotions of the musicians. For at least the start of one weekend, everything was as it had been.  Rehearsals, stepping onto the stage and finally, performing.

“We put everything we have into every concert,’’ said Ross.

He doesn’t know if all orchestras have that sort of professional attitude. But this orchestra does, he said. It’s what has made it special.

Much work left to do

Off stage, of course, much remains to be done.

Leaders of the organization Save Our Symphony Minnesota were at the concert, saying this is a crucial time for the Minnesota Orchestral Association to move aggressively.

“The orchestra has a huge opportunity,’’ said Jon Eisenberg, vice president of the fan-based organization that began with the lockout. “The community is energized around the orchestra in a way that it hadn’t been for years.’‘

In the eyes of SOS leaders, Step One has happened. Michael Henson, CEO of the Orchestral Association, will be leaving officially in August, although it’s presumed he’s already a non-factor in decisions about the future.

Second step, of course, is the rehiring of Vänskä.

“That he’s been talking [to the media] is a good sign,’’ said Maryellen Jacobson, treasurer of SOS. “We need him to come back for a productive period of time.’’

Third is making sure such musicians as Ross remain.

Fourth, a number of administrative positions need to be filled.

But there will remain heavy lifting, surrounding future governance of the board. 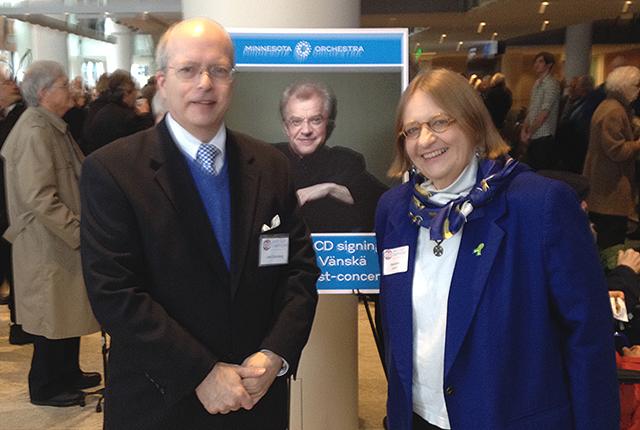 “I’m most concerned about two and three years from now,’’ said  Eisenberg. “The financial health of the organization is critical.’’

Eisenberg and Jacobson believe that means a different sort of “governance’’ from the massive, 80-member board of directors.

The board, as currently constituted, is filled with rain-makers.

“Let me be clear,’’ said Eisenberg. “We love big donors. The organization needs them to survive.’’

But SOS members doubt that such a massive board can be effective in actually governing an organization or reaching out to the new audiences that must be discovered if the orchestra is to survive.

Those, though, are challenges for another day.

Mostly Thursday was a day of celebration of the return of something special.

After the concert, musicians and Vänskä seemed both tired and pleased.

It should be noted, however, Vänskä didn’t have much time to rest on his laurels. Following the concert, the maestro was in his Orchestra Hall study, working with his clarinet.

He’s performing as a “special guest’’ at a concert at Ted Mann Concert Hall at 2 p.m. Sunday with the Artymiw-Keefe-Smith Trio. He’s obviously nervous about the performance.

And then, of course, there’s his status with the Minnesota Orchestra.

“I have no announcements to make,’’  he said.

Does that mean that there are ongoing negotiations, he was asked.