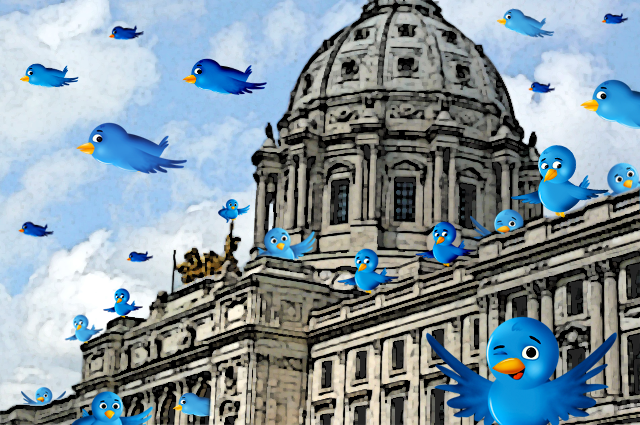 Social media is one of those rare things that cross partisan lines at the Minnesota state Capitol. But the spontaneity has gotten both parties into trouble.

After at least four public apologies from Minnesota legislators, an ethics hearing and a firing, some state agencies and political parties have developed policies to reduce the pratfalls. At least one agency covers everything a person posts on sites such as Twitter, Facebook and Tumblr; however, legislators generally eschew policies for themselves, though not staffers.

Minnesota Republicans and DFLers have used social media to spout out their opinions on politics, connect with their constituents or campaign. But Senate Republican staffer Bob Koss was fired for exchanging harsh tweets critical of then-Republican Rep. John Kriesel for his support of gay marriage.

In the most recent example, Republican Rep. Pat Garofalo, a five-term member from Farmington, apologized for a tweet about NBA players that some saw as racist. “Let’s be honest, 70% of teams in NBA could fold tomorrow + nobody would notice a difference w/ possible exception of increase in street crime,” Garofalo tweeted.

While a post about recent work at the Capitol may get a handful of re-shares or likes, missteps get loads of attention. The tweet, which is still posted on Garofalo’s account, recently had nearly 2,000 “retweets,” more than 500 favorites and hundreds of responses.

Seeing Twitter’s potential for both campaign and constituent work – as well as widespread negative press – political parties in state Houses nationwide have started to draft their own policies, according to the National Conference of State Legislatures.

“There has always been crisis management in politics, but now people have to act a lot faster,” said Paul Gardner, a former DFL representative from Shoreview.

Gardner made the first public apology related to Twitter on the House floor in 2010, for comments he tweeted about two Republican House colleagues during a debate. “If you want to avoid headaches, what you have to do is find out how to take the spontaneity out of it,” he says. “What people should not do is say, ‘ Don’t do social media,’ because it can be so useful.”

The Republican Party of Minnesota recently drafted social-media best practices after two high-profile Facebook flubs from local GOP groups. One post by the Chisago County Republican Party included the line: “Pro-choice: Against slavery? Don’t buy one.” The other post by Winona County Republicans intended to go after coverage under the federal health care overhaul, depicted a toothless President Barack Obama and a doctored photo of Michelle Obama with gold grilles.

The DFL Party has had a social media policy in place for several years, but an affiliated group Alliance for a Better Minnesota (ABM) also got in trouble last year for comparing Republican gubernatorial candidate Jeff Johnson to the gruesome serial killer Patrick Bateman in the film “American Psycho.”

Many Minnesota state agencies – led by commissioners usually appointed by the governor – have social media policies in place for employees, according to a MinnPost survey. 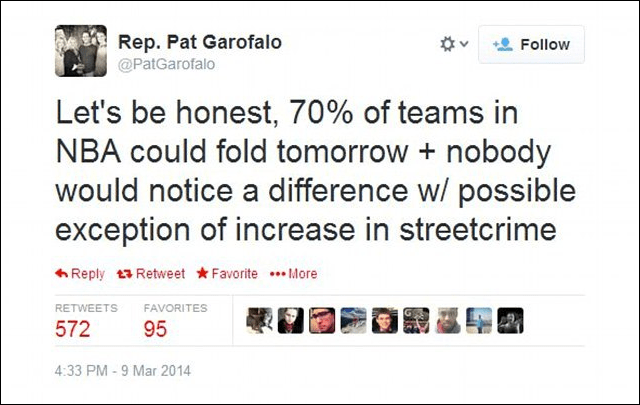 Generally, only communications staffers are allowed to post status updates for state agencies. While departments generally doesn’t monitor personal social media use, they can investigate and take “responsive action” when personal postings at home violate department policies or are viewed as inappropriate.

“Because social media communication is entirely public information, your views and posts will be seen by the media,” reads the Minnesota Department of Education’s employee social media guidelines. “You should consider anything you do in social media to be on the record for purposes of the press, and should never post anything that you wouldn’t want to read in the paper tomorrow.”

Violation of many of these agency polices can get an employee fired.

It’s more difficult to regulate social media use for people with election certificates, especially for personal updates and other commentary outside of politics. Garofalo’s controversial tweet about the NBA, for example, was sent out on a Sunday evening at home.

House DFL spokesman Michael Howard says things like Twitter are more effective if they’re personalized. “We’ve always viewed social media for members as very much as a member-driven practice,” Howard said. “We think those things work better if they are in the member’s own voice.” 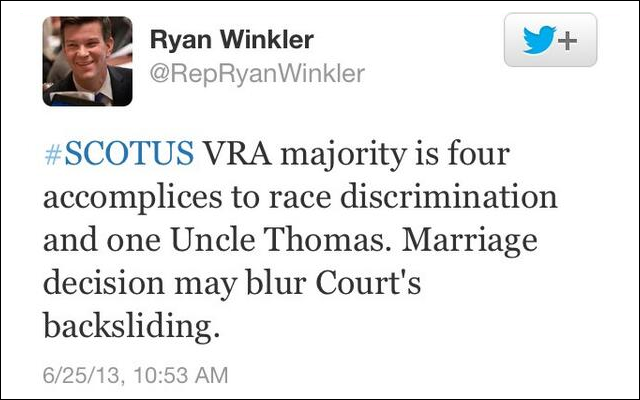 Communications people in both the Republican minority caucuses say they provide social media training and advice for their members, but there are no usage policies.

Senate Republican spokesman Bill Walsh said he and other communications staff give lawmakers broad advice when it comes to social media posts; for instance, the best way to retract a regrettable tweet is to have never sent it in the first place.

But in the Senate, nonpartisan staffers, counsel and legislators from both parties have worked over the last year to create a broad social media policy that can help guide members, Senate DFL spokesman Amos Briggs said.

The upper chamber was the stage for the state’s first-ever Twitter-related ethics hearing in 2012. An ethics subcommittee ordered then-Sen. Gretchen Hoffman, GOP-Vergas, to offer a written apology to Sen. Barb Goodwin, DFL-Columbia Heights, over a tweet Hoffman sent mischaracterizing a Goodwin floor speech about people with mental disabilities.

The rambling six-hour ethics hearing was also a testament to how little many lawmakers understand about social media. Briggs says that’s been a challenge in creating a policy – social networks pop up and change so quickly it’s hard for lawmakers to keep up. Writing any social networking site explicitly into a policy risks looking out of touch a year later.

In general, Gardner thinks legislators and the media tend to get too worked up over things said on social media, but it doesn’t hurt to have a plan in place to avoid stumbles like his own.

“It’s almost like you are watching the entertainment channel rather than talking about newsworthy stuff,” he said. “It’s just the same kind of message discipline you’d have with anything else. If you are just looking to be snarky, you ought to just put the phone down.”