Hedrick Smith won the Pulitzer Prize for international reporting for his stories about Russia in the early 1970s, when he was the Moscow bureau chief for the New York Times. After he returned to the U.S., he described his many encounters with ordinary Russians in their homes, at restaurants and factories and on trains, in “The Russians.” His book was translated into 16 languages.

Now Smith has turned the tables. “I’m covering America as a foreign correspondent would cover it,” he said, discussing his latest book in a telephone interview. “I could have called it ‘The Americans.’ ”

But he didn’t, because that wouldn’t have reflected the book’s edgy tone. Its title — “Who Stole the American Dream?” published in the fall of 2012 — summarizes the way the book weaves economic and political developments in the U.S. since the 1960s into an unsettling narrative.

It’s Smith’s take on how and why the country’s once-ascendant middle class has been slammed by a witches’ brew: losses of millions of good manufacturing jobs, stagnant wages, soaring costs of a college education, the replacement of good pensions with less helpful 401(k) benefits, falling home ownership, political dysfunction and a litany other woes. All the while, the fortunes of the large corporations and wealthy individuals at the top of the economic pyramid kept on growing.

Who was the culprit?

Largely, those well-heeled corporations and individuals and an armada of hired guns — lobbyists, politicians and others — who do their bidding.

Smith will lay out his reportage to Twin Cities audiences next month during several speaking engagements. Among them, Smith will speak at Plymouth Congregational Church, 1900 Nicollet Ave., Minneapolis, at 7 p.m. on April 10. The meeting is free and open to the public.

His visit is part of an extended road trip across America that has featured more than 75 addresses, campus visits and town hall meetings since “Dream” came out.

“Don’t call it a book tour,” he counsels. Instead, Smith’s journey seems more like that of a man on a mission, to piece together a story that draws on more than half a century of work reaching back to his days as a 1950s cub reporter at the Greenville (S.C.) News, supplemented by fresh portraits of people who have not fared well, packed with the data and sources to back up his premises and presented in a play-by-play time line.

Smith views “Dream,” his eighth book, as “absolutely” his most significant achievement. He was at The Times for 26 years, covering the civil rights movement and the Vietnam War, working on the Pulitzer-winning Pentagon Papers team and serving as the paper’s Washington bureau chief and chief diplomatic correspondent.

In 1988, he left the paper and moved on to create 26 prime-time television documentaries and mini-series for PBS. By far his largest audience tuned in to his “Frontline” investigation on how the global supply chain built by Wal-Mart became a model for the outsourcing of millions of American manufacturing jobs.

He describes as a little-known game-changer the unanimous U.S. Supreme Court decision in 1978 that went against Minneapolis-based Marquette National Bank. That ruling paved the way for banks to charge hefty interest rates on credit cards they issued to millions of consumers, he notes, quoting University of Illinois bankruptcy professor Robert Lawless. 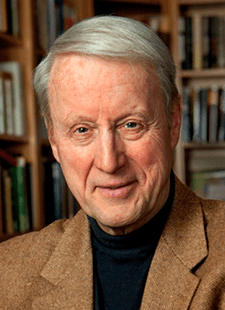 “It’s the court decision that has had the most effect on people’s lives, that no one has ever heard of,” Lawless said. “It effectively deregulated credit card interest rates. Banks hail that as the ‘democratization’ of credit. Their attitude was we can now charge 30 percent to people who would not qualify for a loan before, because they were too high a risk. For banks, these vulnerable borrowers are the most lucrative borrowers.”

Smith said he began his work on “Dream” more or less accepting the view of many economists, academicians and business leaders that globalization, changing technology and market forces have led to the rising inequities. Thus, they often argue that the growing disparities are now baked into a more globalized economy. Smith agrees that those factors have led to more disparity but argues that shifts in public policy have also been a major factor.

He points to Germany, which has significantly less economic disparity than the U.S. but has avoided the trade deficits that have long prevailed in the U.S. and still employs 21 percent of its work force in manufacturing vs. just 9 percent in the U.S. He cites Costco as an example of a company that has maintained health coverage for most of its workers, kept wages steady and avoided large layoffs and yet remained competitive with low-cost rival Wal-Mart.

In the interview, he also questioned the claims, made frequently by Texas boosters and now resonating widely in the media, that the state is prospering largely because of its low taxes and minimal business regulation. “What they don’t take into account is how the Texas economy is driven by oil and gas,” like in Russia, he said. “There’s a lot of smoke being blown.”

Smith begins his story with the successes of movements advocating for civil rights, consumers, the environment, women’s rights, trade unions and peace from the late 1950s into the early 1970s. He describes as highly influential a confidential memorandum titled “Attack on the Free Enterprise System,” written in 1971 by Lewis Powell for the U.S. Chamber of Commerce.

Powell was then a corporate attorney about to be nominated by President Nixon to be a Supreme Court justice. He charged that corporate leaders had responded to their critics in movements led by liberals with “appeasement, ineptitude and ignoring the problem.” Powell called for an aggressive response, complete with think tanks, speakers, “rebalancing of faculties,” close monitoring of the media, paid ads, political and judicial activism and lobbying. Business leaders followed this roadmap and, in Smith’s telling, it ultimately worked in spades for them.

Smith said he “found much more fundamental trouble” than he had expected. A scandal-ridden Wall Street falling off a cliff. The loss of $6 trillion in home equity, with Americans’ share of the value of their homes plunging from 69.2 percent in 1985 to 38.4 percent in 2011. Freight trains taking longer to inch through traffic bottlenecks in Chicago than to get from that city to Los Angeles. Business and trade interests outspending labor by nearly 60 to 1 from 1998 to 2010. Tax levels as a percentage of the nation’s economy at their lowest levels since 1950.

While his “Dream” book didn’t discuss the performance of U.S. media outlets in reporting on the rising inequality, Smith is a critic. “Our media coverage of the American economy is so superficial. If you read the popular press, you would think the country is way more polarized than it is.”

But even with better coverage — given that Smith’s diagnosis is so, well, awful — how could we possibly reach accord on a series of moves to roll back the inequities and “reclaim the dream,” as he puts it, of the middle class?

Some conservative critics dismiss much of this agenda. And while reviews of “Dream”  were mostly thumbs up, a Bloomberg reviewer noted that “nowhere does Smith offer a critique of a consumerist society that has spiraled out of control.”

Smith says the biggest challenge is motivating and engaging everyday citizens. “Average Americans feel powerless,” he said. “The missing ingredient is ordinary peoples’ confidence that they can change things.

“I learned a lot and unlearned a lot. What I find is intense interest” and great concern that the U.S. political system is not working. “I’m finding that in all kinds of audiences.”

He harks back to the civil rights movement, which began with strategizing, goal-setting and small demonstrations long before it ripened into the 1963 March on Washington. Then, an estimated 250,000 Americans gathered to hear Martin Luther King Jr. deliver his memorable “I Have a Dream” speech. Ten months later, Congress passed the Civil Rights Act.