It might once again be possible to travel south on Nicollet Avenue from downtown Minneapolis to Richfield without jogging around the Kmart at Lake Street.

It was nearly 40 years ago when Nicollet was blocked just north of Lake Street to allow Kmart to build a store on two adjacent blocks with surface parking.

And so it has been until this week when the new Lake and Nicollet Redevelopment Project was given preliminary approval by the Minneapolis City Council Community Development and Regulatory Services Committee.

This opens the door to developers and opens up the possibility of reopening Nicollet. Also in the seven-block project area is proposed access to 35W from Lake Street and revitalization of the commercial district.

But before anything happens, the two landowners and two tenants on the land must agree.

“The only way that they [Kmart] could have a store in a different location that would allow the street [Nicollet] to run through, is if they say we like your proposal, or the developers proposal, and we’re going to move into a new store that sits in a different way on the site,” said David Frank, director of transit development for Minneapolis.

The property under the Kmart is owned by the Kadish family, who are not local and who regard the land as an investment, according to Frank, who said any decision to sell the land would probably be a business decision. Kmart has a lease for the store that runs through 2053.

The land under the grocery store adjacent to the Kmart is owned by John Leighton with Jerry’s Foods, based in the Twin Cities, holding a lease for the store. The food store has about three more years before the lease expires, according to Frank.

When the Kmart store opened in 1977, the company had strict rules for the size of building (this one is 80,000 square feet) and the number of surface parking spots. The guidelines did not allow for parking ramps or parking that would require customers to cross a street to access the store.

Today the rules are different. The store needs to be on one floor, but it could be built above or below a parking ramp, according to Max Bulbin, director of real estate and leasing for Kmart.

“It doesn’t work to have that giant piece of land,” said Bulbin speaking to reporters on a conference call from company headquarters in Hoffman Estates in the Chicago area.

“We’re really looking to the city for direction,” said Bulbin, who added that he would like to see Nicollet Avenue reopen and a new Kmart in the same neighborhood but thinks it could be a “long and tough process.”

“We’ve enjoyed a longstanding relationship with our customers in nearby neighborhoods,” Tom Manke, district manager for the Lake Street Kmart. Manke said that he supports establishment of the Redevelopment District, but that uncertainty about the future is hurting sales and employee morale.

The Redevelopment Project calls for retail on both sides of the reopened Nicollet Avenue, a mix of housing options, parking ramps and a small park along the west side of Nicollet Avenue leading to the Midtown Greenway. A variety of public finance options are available for developers. 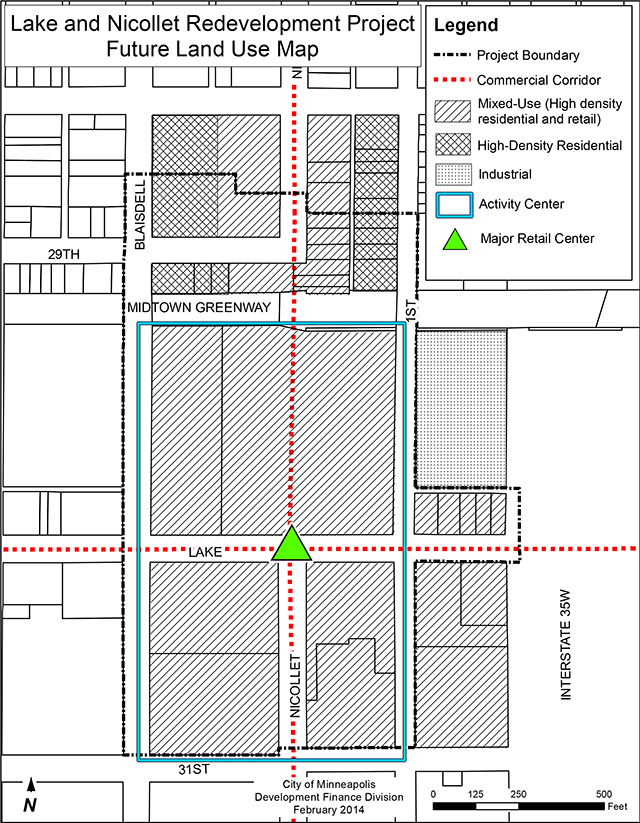 The door is opened to reopening Nicollet Avenue at Lake St.