Advancing one of the critical negotiation pieces of the 2014 session, House lawmakers have approved revamped plans for a controversial legislative office building that will hold all 67 state senators during and after a disruptive Capitol restoration project.

After more than three hours of discussion, the House Rules Committee on Friday passed a redesigned $77 million legislative office building and attached parking facility on 14-13 vote. The new plan is a bit cheaper than the $93.5 million project that was pitched by designers last fall, and it provides space for all senators and staff from both parties while cutting down on design features. The original plan had space for only 44 of the state’s 67 senators.

Senators argue they need the new building after the 2015 session, when they will be displaced from their Capitol offices to make way for the restoration of the 105-year-old building.

“It’s hard for me to imagine a functioning government with senators sprinkled throughout several buildings,” House DFL Majority Leader Erin Murphy said. “I think we have to answer the question of where the Senate is housed.”

The project has been a source of controversy for both parties since last spring, when Democrats passed $3 million in the tax bill to design the project.

DFL Gov. Mark Dayton and House Democrats have been reluctant to fully endorse the building, facing an election year and political backlash from Republicans. The project has also been a sticking point in negotiations between the DFLers in control of state government on everything from taxes to bonding.  Late last month, Dayton accused senators of holding up a time-sensitive package of tax cuts in order to push the project forward.

“There is a strong political charge that is attached to this effort,”Murphy said. “I think the House has done a very good job of thinking through all the alternatives.”

Now that the key Senate priority has moved forward, many other outstanding pieces of the 2014 session are likely to start falling into place. Legislators have to adjourn by May 19.

But Republicans in the House used the hearing to criticize Democrats for passing the proposal with little public input in the final days of the session. Those criticisms are likely to transfer over to the campaign trail this fall.

Former GOP Rep. Jim Knoblach is trying to block the project in court, arguing that a building can’t be included in a tax bill under the Legislature’s single-subject rule.

A Ramsey County judge rejected that argument, but Knoblach has appealed to the Minnesota Supreme Court.

“The process that was put in place by inserting this in the tax bill last year without a committee hearing is unprecedented, and putting it through in such a manner is unprecedented,” Rep. Matt Dean, the GOP lead on the House Capital Investment Committee, said. “It doesn’t go unnoticed.”

Republicans also questioned how the building will be paid for – Democrats currently use a lease-to-purchase agreement to fund the building – as well as who will use the space in the Capitol and other office buildings when senators leave.

“It just astounds me to what level the DFL is tone deaf on this,” Daudt said.

After an initial hearing on the building at the start of session, House members asked the Department of Administration to analyze other possible options.

Among their questions: Is there enough space to hold senators in any nearby buildings on the Capitol complex? Is it cheaper to lease space for senators somewhere else, both temporarily and in the long term?

Most of the department’s responses Friday boiled down to an unequivocal “no.” 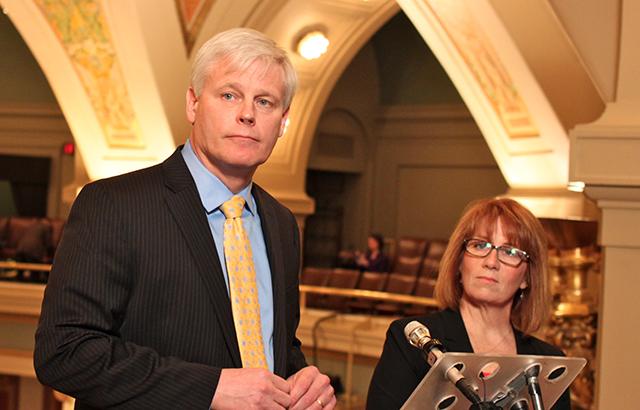 None of the nearby Capitol buildings, including the Department of Transportation headquarters and the old Ford Building, has adequate space for all the senators, said Wayne Waslaski of the Department of Administration. Making space for them would have build-out costs and could delay the restoration project up to two years.

“Not everything that’s in the Capitol is going to be able to get back in [the Capitol],” Waslaski said. “We really want this building to be preserved for the next 100 years.”

Given that information, Murphy said the most “cost-effective” way to move forward is with the new building, with a few House tweaks.

Dayton called original plans for the building “unMinnesotan” and “overly lavish” and was critical of the wall of glass on the façade in original plans. He argued that the Capitol shouldn’t be outshined by any nearby buildings.

Republicans argued that the new plan cut back on parking spaces that were supposed to be available to the public.

The original plan passed through the Senate Rules Committee earlier this year, but the revamped plan will now have to go back to the upper chamber for final approval. The Senate has scheduled a Rules Committee hearing on Monday.

“I commend the House Rules Committee for taking an important step to allow both the Capitol restoration project and the new Capitol office building to proceed,” Senate Majority Leader Tom Bakk said in a statement Friday.

“There remains broad support for the long overdue restoration of Minnesota’s deteriorating Capitol building, which will permanently bump many of the Senate’s hearing rooms and offices out of the Capitol and into a new building across the street,” he continued. “As the Department of Administration confirmed again today, every other feasible alternative and any further delay would be more costly, both in the short term and in the long term.”