After more than five hours and five rounds of balloting, neither candidate managed to earn the 60 percent support needed to secure the party’s backing. Nearly 300 activists participated in the balloting at DeLaSalle High School in Minneapolis on Saturday.

The House race has divided Democratic activists and the Somali community for months. A February precinct caucus to send delegates to the endorsing convention ended abruptly in violence.

The campaigns will continue on to the Aug. 12 primary election, with both candidates hoping to win the support of voters in the DFL district, which covers the University of Minnesota campus in Minneapolis and parts of the Cedar-Riverside, Seward and Prospect Park neighborhoods.

“I’m going to win it. I don’t want to say easily — it’s going to take a lot of work,” said Kahn, who has served the district in the House for last 42 years. “I’ve had more contested primaries than any other candidate. I’ve won them all.”

Kahn said the vote was not representative of House District 60B as a whole, as turnout was low in precinct caucuses in areas around the University of Minnesota, where she carries strong support.

‘This is democracy in action’

But Noor, a Minneapolis School Board member, said it was an exciting day for the community. Noor’s supporters, who filled the high school hallways adorned in his blue campaign shirts,  hoisted him into the air after they learned the race would move on to a primary. “This is democracy in action,” Noor said. “They’ve spoken that this is time for change.” 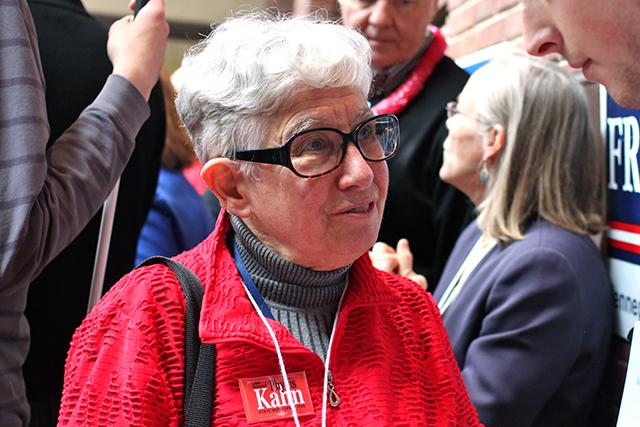 MinnPost photo by Briana Bierschbach
“I’m going to win it. I don’t want to say easily, it’s going to take a lot of work,” said Rep. Phyllis Kahn of the upcoming primary election.

Primaries typically have low turnout, but Noor said he has tapped into an excited and broad coalition of support for his race.

Kahn was just six votes away from clinching the endorsement on the first ballot, but subsequent ballots saw little movement, with delegates locking in their votes. After Kahn lost some support in the fifth ballot, activists approved a motion to adjourn the convention instead of granting an endorsement.

Each has notable endorsements

Both candidates came into the convention with an impressive list of endorsements. Noor earned the backing of former Minneapolis Mayor R.T. Rybak, former House Minority Leader Matt Entenza, the Stonewall DFL and the DFL Feminist Caucus, among others.

But Kahn had DFL Gov. Mark Dayton on her side, as well as other big names like Fifth District Rep. Keith Ellison and Minneapolis City Council Member Abdi Warsame. Kahn backed Warsame’s successful bid to become the first Somali-American City Council member elected in the nation, but his involvement in the race has caused fissures in the Somali community.

In February, a precinct caucus in the Cedar-Riverside neighborhood broke out in violence as both candidates tried to send their supporters to the endorsing convention. Activist Ilhan Omar was sent to the hospital and treated for a concussion.

Kahn, who got into politics in 1972 after suing the U for not granting her the same tenure track as her male colleauges, has taken heat for comments made after the convention minimizing Omar’s injuries. She subsequently apologized and addressed her comments in her Saturday convention speech, acknowledging that she likely offended Omar.

“No one has ever accused me of being nice,” Kahn told the crowd. “You don’t grow up on the streets of Brooklyn and get degrees in the male dominated field of physics … by being nice.”

Going forward, Kahn will continue to stress her seniority in the Legislature and her work on statewide issues like climate change and anti-smoking legislation, as well as district-focused issues like higher education.

Noor has focused his campaign on education, saying his first bill as a legislator would aim to institute universal prekindergarten education in the state.

DFL party leaders had hoped one candidate would leave the convention with the endorsement Saturday instead of spending five more months of intra-party battling for the seat.