A southwest Minneapolis house constructed in 1893 by master builder Theron Potter Healy appears to be headed for demolition.

On Thursday, a Minneapolis City Council committee voted 5-1 to approve a demolition permit for 2320 Colfax Ave. S., currently a 15-unit rooming house and designated historic resource. For more than a year, property owner Mike Crow has battled the city for permission to make way for a four-story, 45-unit apartment building just off Hennepin Avenue in the Wedge neighborhood.

“Staff feels the property does not retain its integrity,” said John Smoley, a city planner and historic-home expert. “A fire in the 1980s and a series of renovations at that time have made, in staffs opinion, the interior character decidedly 1980s.”

Some historians say the home is the first example of Healy’s move away from his popular Queen Anne style dwelling and into the Colonial Revival Style that followed the example of architecture at Chicago’s Columbian Exposition the same year he built the house on Colfax.

Crow first petitioned to have the home demolished in 2012 and received a permit in February 2013. But that was appealed to the city’s Historic Preservation Commission (HPC) which granted the appeal, blocking demolition. Crow then appealed that decision to the City Council which also denied his application for demolition.

But he was back again in this year with an application for demolition of an historic resource. The HPC denied that application, and established interim protection for the property. Crow again appealed the decision to the City Council, leading to Thursday’s approval.

There are currently more than 100 Healy houses in Minneapolis, many with historic designation, and 27 in the area of 2320 Colfax. Most of the arguments, for and against demolition, during the public hearing focused on the condition of the Colfax building.

“During my examination I discovered that beneath the vinyl siding, which is equivalent to a blanket being pulled off, that the original siding is still there and the foundation is in perfect condition,” said John Jasper, who has done numerous historic restorations and inspected the building to determine if it could be moved.

Jasper also said the original front wall is still in place as are the some bowed windows. “This is potentially 180 tons of waste that could go into a landfill.”

The house’s first owner was Edward Orth, whose father owned the Orth Brewing Company. He lived in the home, which also had a large barn on the property, until 1904, when the home was sold to Thomas Kenyon, a pharmaceutical salesman.

“I have been put in a position where I have to make a choice between having a private life and losing everything I have left,” Crow argued, saying that selling the property is imperative to him.

He said he has had not offers from anyone to buy the property despite the publicity the potential teardown has received. 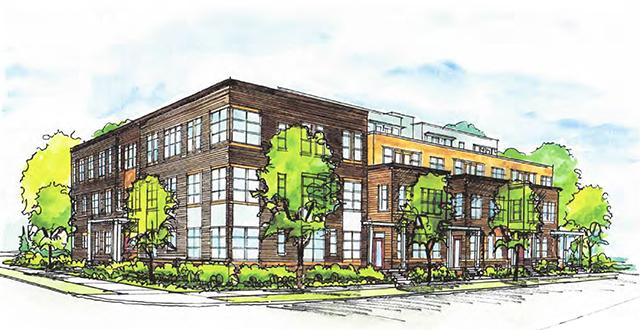 Lander Group
For more than a year, property owner Mike Crow, has battled the city for permission to make way for a four-story, 45-unit apartment building just off Hennepin Avenue in the Wedge neighborhood.

“They’ve never listed this house on MLS; they refuse to do it,” said Ezra Gray, who is restoring his home in the same neighborhood.  “It has to be sold as a rooming house, and as Crow’s own Realtor put it, rooming houses are a dying industry. They might as well be trying to sell it as a VHS rental shop.”

Others speculated that other Healy houses in the neighborhood might also be demolished if the Colfax house were to be torn down.

“This is my neighborhood, many of you are my neighbors,” said Council Member Lisa Bender, who chairs the Zoning and Planning Committee and who moved to allowed the demolition that was halted a year ago.

“Today we’re talking about the economic value of this home,” Bender added, “I can’t imagine anyone investing $500,000 or more to restore this building as a single-family home.”

Responded the lone Council dissenter, Lisa Goodman: “This house will see an untimely death as a result of its location. If this was in Lowry Hill or Kenwood we would not be having this conversation.”

Anders Christiansen, a student of Healy houses, filed the original appeal in 2013 to halt the demolition process. He pointed out that the year the Colfax home was built, Healy constructed a total of four houses. Only the Orth House survives.

“I’m just shocked,” said Christiansen following the pro-demolition vote. “We have a City Council and Mayor who talk about zero waste and about equity, but yet when it comes down to it we don’t really care about those issues.  We care about serving developers and supporting landlords who don’t take care of their property.”

The vote to approve demolition now goes forward to the full City Council, which will in turn vote, on the matter April 25.