The Minnesota Legislature has a constitutional amendment problem.

Some lawmakers say Minnesotans are suffering from “amendment fatigue” after the 2012 election, when voters faced two controversial amendments on the ballot — a ban on gay marriage and a photo identification requirement to vote. The then-Republican majorities were able to bypass Gov. Mark Dayton’s signature and put the issues to voters with a simple legislative majority.

But now in the majority, DFL lawmakers have proposed a number of ballot issues, from Sunday liquor sales to a brief interlude in which the minimum wage issue was pitched as a ballot question. These DFLers argue some things are simply too hard or downright impossible to handle legislatively.

Senate Majority Leader Tom Bakk understands the problem better than most. Last year, he pushed a successful 2016 ballot initiative that will ask voters if an independent council should be established to determine how much legislators are paid, breaking years of logjam over the issue in St. Paul.

This year, he wants to ask the voters to raise the bar for putting constitutional amendments on the ballot in the first place.

“I think amending the Constitution is very, very serious business. I think a higher threshold requiring bipartisan vote — so that one party can’t make a decision to amend the constitution — is the right public policy,” Bakk said. “I think having some bipartisan agreement on that makes for a better process, potentially a better amendment and better language than allowing one party to do it without the other.”

Of all the DFL amendments, making it harder to put initiatives on the ballot seems the most likely to get support. Bakk said House Speaker Paul Thissen has privately shown some interest.

Referring to the 2012 election, Thissen says, “We saw the impact and the debate around what should be in our Constitution or not. That doesn’t foreclose the fact of the kind of ‘good government’ constitutional amendments, like making it harder to amend the Constitution. That’s clearly something that belongs in there, but we obviously have not moved on any of those as of yet.”

Amendments in the queue

Each legislative chamber has introduced about 20 constitutional amendments over the last two sessions. Some pop up every year, like the one to abolish the office of the lieutenant governor or the amendment to make the Legislature one chamber instead of two. Other perennial amendments aim to put term limits on legislators or shrink the total number of lawmakers who can serve.

This year, DFL Sen. Roger Reinert has proposed an amendment that would ask voters if they want to buy booze on Sundays. Polls show strong public support for Sunday liquor sales, but the Legislature routinely rejects efforts to lift the blue law at the behest of the Minnesota Licensed Beverage Association and its army of Mom and Pop liquor stores.

But the amendment was proposed as part of a bill package to ease Sunday liquor bans; Reinert acknowledged immediately that it was more of a way to show legislators there’s another path forward, rather than a concerted effort to put it on the ballot. 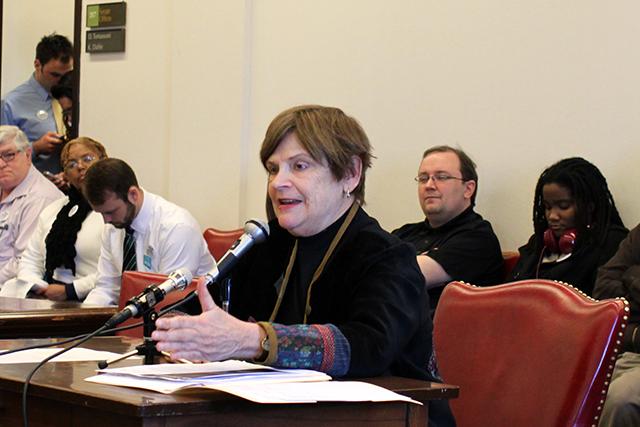 MinnPost photo by Briana Bierschbach
Sen. Ann Rest proposed a minimum-wage constitutional amendment. The issue has since been settled legislatively.

At the peak of intra-DFL tensions over a minimum wage deal that included indexing, DFL Sen. Ann Rest briefly proposed an amendment to ask the voters if the minimum wage should be increased to $9.50 per hour in 2015 and indexed to inflation starting in 2017.

Rest said she generally believes things shouldn’t be etched in the state’s constitution if they can be accomplished in statute, but occasionally there are issues that are so contentious they can’t be handled in any other way. (Lawmakers reached a minimum wage deal on Monday).

“There gets to be a point, and we’ve reached this point on other occasions as well, where an issue is so volatile, it’s so full of advocates on one side or the other, it’s not unseemly for the Legislature to ask the voters themselves to participate in the process,” she said.

Raising the bar for amendments

Immediately following the 2012 election, there was a rush from legislators to introduce ballot initiatives — more than a half dozen in all — to make it harder to pass amendments.

Under Bakk’s bill, proposed amendments would need backing from 60 percent of both the Senate and the House instead of a simple majority. The plan would also allow only one chamber to pass a particular amendment during a given year. The other chamber would have to wait until the following calendar year to pass its version.

Some think Bakk’s interest in constitutional amendments is more issue-based. On the minimum wage amendment — which Bakk co-authored — it was a negotiating tactic. (“The only response to that amendment is a determined eye roll,” said DFL Rep. Ryan Winkler, the House lead on minimum wage, during negotiations.)

On the amendment making it harder to pass amendments, Bakk told a Capitol rotunda crowd on the session’s first day that he didn’t want to retire one day just to watch Republicans take control of the Legislature and pass a right-to-work amendment. An effort to do so sputtered and stalled in the GOP-controlled Legislature in 2012. Bakk was the head of a carpenters union before becoming a senator.

“It could be that we take that up at some point this session and have a debate about that on the floor of the Senate,” Bakk said. “The House, I think, doesn’t quite know yet whether they want to have anything on the ballot, but clearly if they put something on the ballot that’s the most likely one they’ll consider.”

Some issues can only be dealt with in the Constitution.

For years, legislators in both chambers have pushed a ballot initiative that would move the state to a judicial “retention election” system.

Under the proposal, judges would stand for re-election, but voters would simply cast an up or down vote to keep a judge around. If voters choose to get rid of an incumbent judge, an independent panel would review a new set of candidates and send a short list the governor, who would make the final pick. The idea is to move away from the expensive partisan judicial elections that have occurred in states like Wisconsin.

Some smaller changes can be made in statute, but changing the election process can only be accomplished through an amendment, said GOP Rep. Michael Beard, the co-sponsor of the proposal. (For the latest information on the proposal’s status in the Legislature, see MinnPost’s Bill Tracker.)

A large coalition has built up around passing the proposal, including former Republican Gov. Al Quie and former Supreme Court Justice Eric Magnuson, but the issue has once again stalled at the Legislature. Part of the reason is an unwillingness from leadership to move on any amendments.

“The core of this issue, what the advocates would really like to see changed, has to be accomplished through a ballot initiative,” Beard, who is retiring this year, said. “If there hadn’t been so many amendments on the ballot in the last eight to 10 years, it probably would have had a better chance.”

Stop me before I amend again: DFLers’ constitutional paradox