Senate Democrats were the last caucus to unveil their 2014 construction-projects wish list, but the extra time behind closed doors may mean their vote counting is already done.

Urban and rural Senate members praised Monday’s $1.1 billion package, which came months after Gov. Mark Dayton released his bill and weeks after the House unveiled its proposal. Even rank-and-file Republican legislators said the Senate bill was moving “in the right direction.” The bonding bill needs GOP votes to pass.

The Senate’s proposal borrows $846 million and spends another $200 million from the state’s $1.2 billion budget surplus on everything from fixing crumbling buildings on college campuses to local roads and bridges (go here to see the full list of projects).

DFL author Sen. LeRoy Stumpf says the plan pumps much more money into transportation projects, water infrastructure and housing than the governor or House counterparts, while investing money in civic center projects in the state’s regional centers and key urban projects like the redesign of the Nicollet Mall in Minneapolis.

Three civic centers are funded in the bill — Rochester ($34.5 million), St. Cloud ($11 million) and Mankato ($14.5 million) — while the Duluth Zoo and NorShor Theater also get funding. In Minneapolis, the redesign of Nicollet Mall would get $20 million.

Most of the bill’s cash portion — $126 million — is spent to complete the Capitol restoration project, which Dayton included in his proposal. Stumpf also matched the governor on priorities in the human services, including $56 million for upgrades to the Minnesota Security Hospital in St. Peter and $7.5 million for redesign on the Minnesota Sex Offender Program campus.

Stumpf said he’s lined up with the House and Dayton in quite a few areas, but there are some key differences that will have to be worked out in negotiations.

“It’s a delicate balance. We’ve tried really hard this year to bring the Democrats and Republicans and the rural and urban people together,” Stumpf said. “Right from the very beginning, I tried to emphasize that we wanted to try to do the basic kind of things —asset preservation, the transportation needs and housing, realizing that there’s going to be communities that want, let’s say, a sculpture garden or some other project that probably many people think is more of a frill than a need … but you have to have those projects in there, too.”

The Senate puts $13 million into the Lewis and Clark Regional water pipeline, which is stalled after federal funding dried up. Dayton emphasized the project in his State of the State address last week and calls for $20 million this year to complete the first phase. Republican legislators say they want the full $70 million allocated in this bonding bill to complete the project.

“We will enter into negotiations with the governor or whoever, and if more cash falls our way we will definitely consider it,” Stumpf said.

House Capital Investment Chair Alice Hausman said a priority is $50 million for the University of Minnesota Bell Museum of Natural history redesign and planetarium. Stumpf does not include that project in his bill.

Republicans will also need convincing to support the bill. So far, they are holding the line on an $850 million bonding limit for this year at the end of last session. The cash portion of the bonding bill allows Democrats to get around that agreement and spend more, but the three DFL leaders would like to spend beyond that.

Stumpf said he has been working closely with GOP leadership in the Senate to select projects. “That will pay off,” he said.

Because of a 60-percent supermajority requirement, Stumpf needs the support of every member of the DFL caucus plus two Republicans to pass his bill, but he seemed fairly confident he had those votes already lined up.

Still, a group of GOP rank-and-filers said Monday that Democrats still have the wrong priorities. While they liked that the Senate fully funded the Capitol restoration project and stayed under the $850 million bonding limit, they criticized projects like improvements to the Minneapolis Sculpture Garden.

They said Democrats should be focusing money on roads, bridges and infastructure. 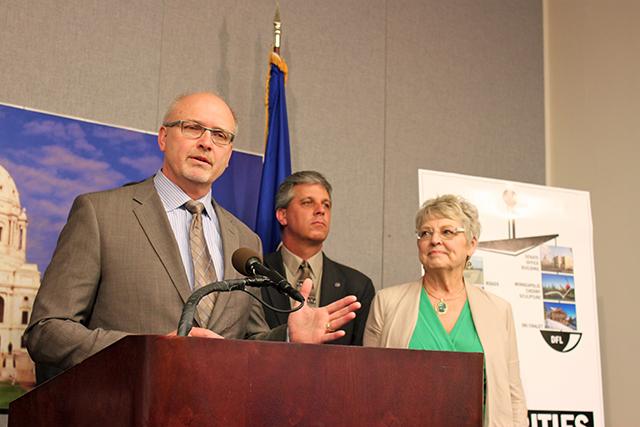 MinnPost photo by Briana Bierschbach
GOP Sen. Roger Chamberlain and Reps. Steve Drazkowski and Sondra Erickson criticized some of the bonding projects as examples of misplaced priorities on the part of the DFL majority.

The Senate will vote the bill out of the Capital Investment Committee Tuesday. Stumpf anticipates a short conference committee between the two bills, meaning each chamber will have to pass their bill off the floor at least twice.