After nine hours of voting and seven ballots, Dahlberg led McFadden 54 to 44 percent — however, activists gathered in Rochester for the party’s convention made little movement in the last round of balloting as the hour approached 2 a.m. With the patience wearing thin for the more than 1,000 remaining delegates, activists overwhelmingly approved a motion to suspend the convention. Republicans are vying to take on DFL incumbent U.S. Sen. Al Franken this fall.

Dahlberg was an underdog in the race but jumped to a first-ballot lead on with 25 percent delegate support. That was a few points ahead of McFadden and state Sen. Julianne Ortman. Ortman was the favorite to win the endorsement coming into the convention, after she won a Senate straw poll among GOP activists October.

Dahlberg’s support only rose in subsequent rounds of balloting, eventually knocking Ortman out of the endorsement race because she failed to get a minimum number of delegates. Ortman said she would abide by the process and withdrew from the weekend battle, but it was not clear if she would drop out of the fall race if delegates do not endorse. Abeler has not closed the door on a primary campaign.

In his speech to delegates, Dahlberg said he has crossover appeal to voters, winning county commissioner races in St. Louis County, which includes the DFL bastion of Duluth. “I am the only one tested in battle that has won three times in northeastern Minnesota,” Dahlberg told delegates.

He branded himself as a “constitutional conservative” and ardently defended the right to bear arms. “I’m a little troubled when we have candidates in this race who way we need more background checks,” Dahlberg said, referring to a position McFadden once held. 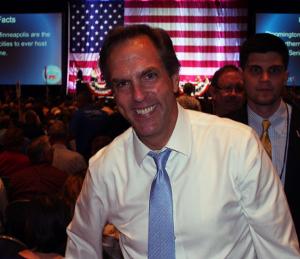 McFadden focused his speech to delegates on the economy and education policy, rarely throwing out the kind of conservative red meat rhetoric that earned cheers and standing ovations from the crowd for other candidates. “The single biggest issue in this country today is we have created a class of politicians, and the Republicans are just as bad as the Democrats,” he said.

He called for the repeal of the federal Common Core education standards for states and bashed so-called Obamacare, but didn’t call for a full-on repeal of the healthcare program.

Ortman, who has earned the backing of the Tea Party Express and other conservative groups in her quest for the endorsement, came down hard on the healthcare law, saying she would support a full-on repeal.

But her conservative credentials were questioned in a lit piece passed around the floor noting her support from Log Cabin Republicans — a “gay Republican organization,” according to the piece. 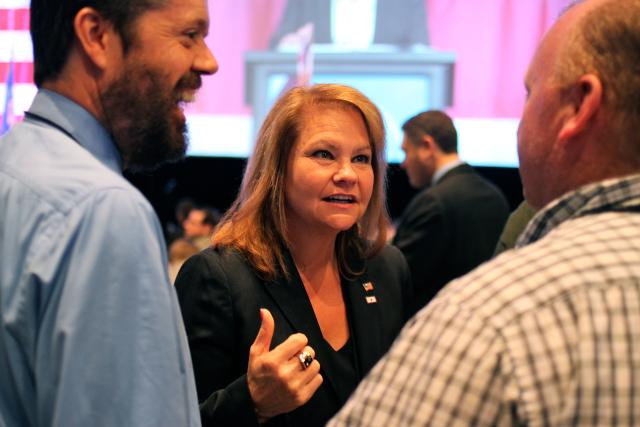 MinnPost photo by Briana Bierschbach
Ortman said she would abide by the process and withdrew from the weekend battle, but it was not clear if she would drop out of the fall race if delegates do not endorse.

Fundraising ability became a critical dividing point between activists in the race.

McFadden, a businessman and political neophyte, has promised to move on to an August primary election and has $1.8 million on hand to support his bid.

“I left my job and put my family at risk to beat Al Franken, and as long as I believe I’m the best candidate to beat Al Franken, I’m going to stay in the race,” McFadden told activists nearing midnight. “We need to have the resources to do that, and I’ve proven I can do that.”

Franken currently has nearly $6 million in his campaign war chest.

Dahlberg, who had about $40,000 on hand as of the last reporting period, downplayed role of fundraising alone in beating Franken. “This is about boots on the ground,” he said. “This is not about just throwing as much money as you can against the wall.”