Thursday was a day of Days at the state capitol.

The atheists — along with their “cousins’’ the humanists — were celebrating, for the ninth successive year, a “Day of Reason’’ in the state Capitol rotunda.

It was also, for the 63rd year, the “Day of Prayer.” And it also turned out to be Freedom Day. (There are all sorts of “Freedom Days” — the big one on Feb. 1 celebrates the 13th Amendment and slavery’s abolition. Thursday’s Freedom Day was obscure, with roots in the 1990s anti-environmental movement.)

The Prayer Day people had crown-wearing Miss Minnesota, Rebecca Yeh, playing a patriotic song medley on the Capitol steps. A devout Christian, Miss Minnesota was adored by the prayer people.

The Freedom Day celebrants were represented by a group of Civil War enactors from New Ulm. They had two cannon with them. A couple of busloads of school kids, who were on the Capitol steps, screeched in delight when the Freedom Day squad fired off the cannon.

The atheists came to St. Paul armed with “reason,’’ which seemed to be enough to satisfy the 40 or so people gathered to counter the whole notion of a National Day of Prayer.

It should be noted that all of these events went off in peace and harmony, though Rep. Kurt Zellers, a Republican gubernatorial candidate who was at the Freedom Day event, said he’d be a little nervous if he was among the Capitol atheists.

“On the National Day of Prayer, I’d be watching out for a bolt of lightning if I were the atheists,’’ Zellers said. (He was laughing.)

The National Day of Prayer, which began under President Harry Truman in 1952, has become a must-participate event for a lot of elected officials. There are “Prayer Day’’ breakfasts throughout the state and country. It’s pretty safe for a pol to be seen at a Prayer Day event.

The atheists don’t draw a lot of elected officials to their event. On hand Thursday were Reps. Phyllis Kahn, DFL-Minneapolis, and Mike Freiberg, DFL-Golden Valley.

“I’m extremely pleased to have a colleague here,’’ Kahn said, nodding to Freiberg. “His being here means I’ve doubled the numbers of House members present.’’

Secretary of State Mark Ritchie also was on hand, though it should be noted he’s not running for re-election. Ritchie is active in his Unitarian Universalist church and was vague about whether he would have attended this event if he was running again.

As it was, the Secretary of State welcomed the atheists/humanists to “the people’s house,’’ where all ideas are free to be expressed.

Ritchie got a nice round of applause and disappeared quickly.

It might come as a surprise to many that the atheists speak well of Ritchie’s predecessor, Mary Kiffmeyer, who now is a Republican state senator from Big Lake and a devout Christian. 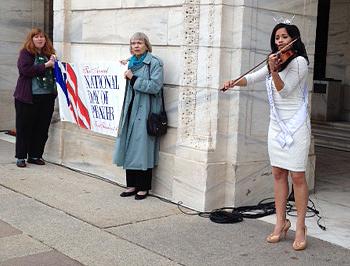 “Kiffmeyer spoke to us twice when she was Secretary of State,’’ said Steve Petersen, one of the leaders of Thursday’s event. “She told us she disagreed with us, but she also always said we have a right to be here.’’

The atheists and the humanists said they don’t come to the Capitol to agitate the Prayer Day people. Still, they must know it stirs up some juices when they talk of religion being “superstition.’’

“For those so-inclined to prayer, let them pray in their churches in their homes, not the halls of government,’’ said Audrey Kingstrom, presidents of the Humanists of Minnesota. “Faith provides no common currency to govern all the people.’’

Shortly after the atheists and humanists left the building, the Prayer Day people were praying up a storm. Though Prayer Day is designed to represent all faiths and religions, this appeared to be a solidly, conservative Christian crowd at the Capitol.

What of the separation of church and state?

“The country was founded on Christian-Judeo values,’’ said Pastor Dale Witherington, an organizer of the Prayer Day event. “The laws are based on the Bible and the 10 commandments.”

What did she think of sharing a day with the atheists?

“It’s an opportunity to show them what Christ has done in our lives,’’ she said. “We can show them the joy we have because of Christ in our lives.’’

But it appeared that most of those who publicly admit to being atheists had left the building.