Gil Penalosa, who has worked in 165 cities around the world helping citizens improve their communities, comes to town May 5-9  to share ideas about “getting Minneapolis-St. Paul to shift from being a good place to being a great place for all.”

Penalosa, former parks commissioner in Bogotá, Colombia, and now executive director of Toronto-based 8-80 Cities, will examine innovative urban initiatives throughout our cities and suburbs as part of the third annual Placemaking Residency, which involves 19 local organizations and government agencies.  He will offer observations and recommendations at a dozen public events (including a Spanish-language presentation in South Minneapolis sponsored by the Metropolitan Council) and will headline the 20th annual Great River Gathering.

“Gil will have an intensive immersion in Twin Cities neighborhoods, meet with citizens, go on walking tours, even take part in a game show at the Amsterdam Bar, all of which will spark a wide and robust conversation about our future,” says Patrick Seeb, executive director of the St. Paul Riverfront Corporation, principal sponsor of the residency. “We invited him to inspire us to strive for being best in the world. He’s going to push us to think beyond Milwaukee or Chicago.”

‘You can be world-class’

In a phone interview from Toronto (during one of his rare visits home over the Easter weekend), Penalosa noted that he’s visited the Twin Cities several times.

“I had a fantastic time in the parks and walked, biked and ran on the magnificent trails. I feel that there is a lot of room for improvement especially in sustainable mobility: walking, cycling and transit. In parks, as in everything, there is room for improvement too. You can be world-class.” 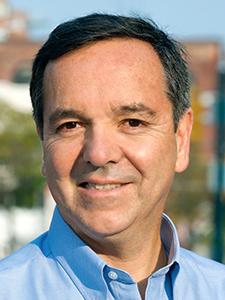 Over the past several years, he’s visited 85 North American cities and 80 throughout the rest of the world researching what makes a great place for people of all ages and incomes. His conclusions: 1) vibrant public spaces and parks; 2) safe streets for all users; 3) comfortable options for biking and walking; 4) fast, convenient public transit; 5) public officials willing to collaborate with communities.

“The measure of a great city is how it treats its most vulnerable residents, the young, the old and the poor,” Penalosa says.

He lauds Chicago mayor Rahm Emanuel for his pledge to cut the city’s pedestrian and bicycle accidents in half during his first term, and New York’s Vision Zero goal of eliminating traffic deaths and injuries on city streets.

As to improving life for those who are struggling economically, Penalosa recommends: “There is nothing that government could do that would have a higher impact on middle-class families than to enable them to switch from two cars to one, and for poor families to switch from one to none.” In a region like Minneapolis-St. Paul, he says, two-car suburban families typically spend 27 percent of their income on transportation.

Although most American communities are built around automobiles, Penalosa sees an opportunity to improve growing cities like Minneapolis-St. Paul over the next few decades.  An estimated 50 million new homes — the equivalent of all existing homes in the UK, Canada, Denmark, Belgium and Chile — will be built by 2045 when the U.S. population is expected to level off.

“Will these new homes be built with parks nearby? By schools where kids can walk? By public transit? Will it be easy for people to bike and walk? There’s a sense of urgency that we do these things right,” he said.

“The beauty of the week,” Seeb notes, “is that we see plenty of transformation going on — some is still in the talking phase like the South Loop in Bloomington, and some that is already here like the restored Union Depot.

Charles Landry, the UK-based originator of the “Creative Cities” concept, was featured at the first Placemaking Residency in 2012, followed by Katherine Loflin, chief researcher for the Knight Foundation’s landmark Soul of the Community project, last year.

How to elevate the Twin Cities from good to great