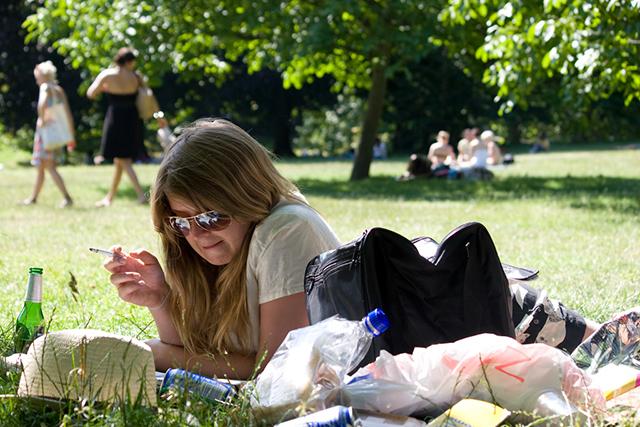 The Minneapolis Park and Recreation board is poised to ban smoking throughout the city’s parks — and become the first in Minnesota to ban e-cigarettes.

The current smoking ban, enacted in May 2010, applies within 100 feet of park buildings, playgrounds, pools and water play areas, on beaches, in park buildings and in park vehicles. Smoking is also banned within 50 feet of bleachers and youth athletic fields.

“I think people are comfortable with banning smoking throughout the parks,” said Park Commissioner John Erwin, who along with Commissioner Jon Olson, proposed the total ban. “Smoking pretty clearly isn’t something that makes people healthy.”

Olson admits to being a smoker himself and is the person who advocated for including e-cigarettes in the policy. “There’s been enough time, it shouldn’t be a big issue for people,” he said.

“We don’t know a whole lot about the vapor and what is in the vapors,” said Olson, “People say it’s harmless but there is plenty of information that says it’s not.”

According to Erwin, “The existing policy was a great first step but it’s difficult to enforce,” noting that it is challenging for the public and Park Police Officers to measure the distance someone might be from a facility. “It makes it difficult for users to know where they can smoke.”

The current policy is not an ordinance, so park policy can’t issue a citation to offending smokers, only ask them to leave the parks.

Erwin and Olson have not decided whether the new ban would be an ordinance — but if it is, Erwin said he would like to delay issuing tickets for a year to give park patrons time to learn the new rules.

“I believe that when people go to parks they don’t want to inhale what other people are giving off,” Erwin added.

Currently, smoking is also banned from park gardens including the Sculpture Garden, The Eloise Butler Wildflower Garden, The Rose Garden and the Roberts Bird Sanctuary, as well as the Lake Harriet Bandstand and the Wirth Winter Recreation Area.

The organization Tobacco-Free Youth Recreation lists tobacco restriction for 48 park organizations in the metropolitan area. Of those, half are given a high score for smoking bans including Golden Valley, Bloomington, Brooklyn Park and Maple Grove.

“These policies are about smoking, not about the smokers,” said Emily Anderson of Tobacco-Free Youth Recreation who is pleased to see Minneapolis including the e-cigarette in its proposed smoking ban.

“The e-cigarette is so new it’s not in other park policies,” Anderson said. “The e-cigarette market is largely controlled by the tobacco industry, they don’t have peoples health in mind.

“We have worked really hard to get tobacco out of the public eye,” said Anderson noting that an entire generation of young people has grown up without seeing people smoking in restaurants, in offices and public buildings.

When Parks Commissioner Brad Bourn pushed for a total smoking ban four years ago, Erwin and Olson were among those opposed. “It sounds like there are folks who have changed their minds,” Bourn said.

Looking back Olson says “I really felt like we needed more time to get people comfortable with it (a total ban)” when he voted on the current policy. “It really spoke of big government pushing people around.”

“People have had time to get used to it,” said Olson. “I think it’s great.”

The first public discussion of the proposed comprehensive smoking ban is scheduled for June 4, at a 5:20 p.m. Recreation Committee meets at 2117 West River Road.