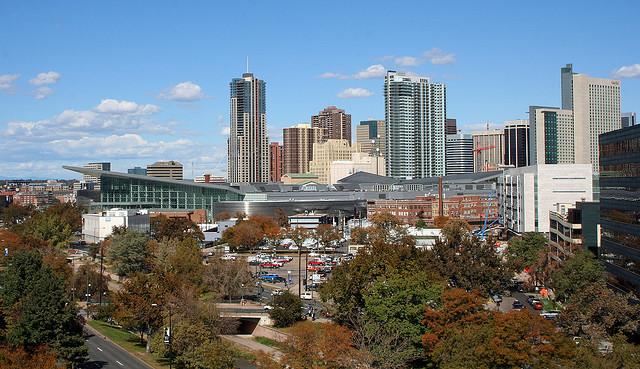 The nation’s leader in attracting educated young people, the Mile High City thrives as a result of urban assets such as a strong downtown and extensive light-rail network. This article is part 1 of three pieces exploring what a trio of other cities can teach Minneapolis-St. Paul. It is adapted from a new McKnight Foundation report, “A Tale of Three Cities.”

The history of Minneapolis-St. Paul (MSP) has not been one of steady growth and prosperity. We peaked in the Census rankings of largest U.S. urban centers in 1890 at No. 9, ahead of Washington, Detroit and Los Angeles.

The opening of the Panama Canal in 1914 diminished our influence as a gateway to the Pacific Coast. Amid the social unrest of the 1930s, Fortune magazine warned, “The revolution may come from the Minneapolis gateway district” and went on to pronounce St. Paul “cramped, hilly and stagnant. … Its slums are among the worst in the land. … [if] the entire city slid into the Mississippi and disappeared, it would hardly make a ripple in the economic life of the United States.”

Over the past 70 years, however, we have enjoyed unprecedented stability and a national reputation as a progressive, prosperous, pleasant place to live. But we won’t maintain this enviable position by continuing to do things as we always have. It’s more important than ever to pay attention to what’s going well here and what needs attention and action.

One good way to make sure we keep up is to look at “peer cities,” for innovative ideas to borrow. That’s why I recently visited Seattle, Denver and Toronto for a McKnight Foundation report, which will be excerpted in MinnPost starting with Denver today.

Like Minneapolis-St. Paul, Denver is a landlocked city in a remote location that thrives thanks to its surprising urban sophistication and nearby outdoor opportunities. While there are no easy, off-the-shelf solutions to our problems, Denver offers inspiration and practical examples to help us make sure MSP will be a good place for everyone to live, work and raise a family.

Denver is not the first place we expect to find fresh ideas for making sure the Minneapolis-St. Paul region continues to thrive. Many of us tend to think of it as the place we claim our luggage and rent a car before skiing or hiking in the mountains. Well, not anymore. The Mile-High City boasts many enviable assets that we ignore at our peril. It’s the top region in the country for attracting educated people aged 25-34, according to a Brookings Institution study, which ranked MSP 36th.

“The outdoor lifestyle and livable qualities here are a big attraction — similar to Minnesota,” says Tom Clark, executive of the Metro Denver Economic Development Corporation. He ought to know, since he grew up in Canby, Minnesota, and attended college in Moorhead before embarking on a career promoting Denver as a great place to do business. Two years ago, the Denver Post named Clark “Business Person of the Year,” citing his role in attracting to town a new U.S. Patent Office, the relocation of several corporate headquarters, the addition of direct flights to Tokyo, and hundreds of new jobs at Hitachi Data Systems and the Kaiser Permanente health care organization.

This is quite a turnaround from the 1980s, when a crash in the energy business threatened to turn Denver into a ghost of its former self. The downtown office vacancy rate was 31 percent. The city of Denver’s population dropped almost 10 percent between 1970 and 1990.

But since then it’s grown by 32 percent. What happened?

Denver climbed back by shaking off the dust of its frontier past, and creating a strong, proud urban identity. A forest of cranes constructing new lofts and high-rise apartment buildings can be seen all around the downtown area. The city is strikingly diverse, with 48 percent of residents being people of color and 23 percent speaking Spanish at home. The Denver area is attracting clusters of companies in well-paying industries like biosciences, aerospace and wind power.

“Denver’s attracting people by being the best urban place we can be,” explains Thomas Gougeon, president of the local Gates Family Foundation and a former city official and developer. “That’s not a luxury, it’s how you find your role in the world. Even the suburbs now want downtowns; they want transit, they want density, they want public spaces, they want diversity, they want culture.”

Here are some pillars of Denver’s success:

A local point of pride, repeated to me several times during my visit, is that Denver’s downtown is 10th largest in the country even though the metro area ranks 21st in population.

It’s Tami Door’s job to keep things lively. As president of the Denver Downtown Partnership (DDP) she’s in charge of everything from throwing a New Year’s Eve party for 75,000 to organizing 150 events drawing 5,500 people and 650 companies during Denver StartUp Week, a celebration of entrepreneurism.

“Nothing you see in downtown Denver is an accident,” she says. “There isn’t a tree or public space that wasn’t thought about methodically.”

The Downtown Partnership focuses on keeping people happy with programs to expand park facilities for better gathering places, to ease the way for starting new businesses, to improve walking for better connections around town, and to build protected bike lanes for safer, smoother cycling.

Clark, who is in charge of boosting business throughout the Denver area, says “the urban center is the shop window for the whole region — even people in the suburbs see the advantage of making it strong.”  That’s just one sign of a carefully cultivated collaborative culture that grew out of the 1980s economic bust. “Things were desperate then,” he says. Cities and suburbs knew they couldn’t keep squabbling among themselves.

There are now two rules that govern business and civic leaders here, Clark outlines: “You can’t steal from other communities, and you can’t speak ill of your neighbors.”

Gougeon credits a coalition of regional mayors for the 122 miles of light rail and commuter rail lines now running or under construction throughout the Denver area. The Metro Mayors Caucus championed a $4.7 billion transit initiative based on a 0.4 percent hike in property taxes, which was approved by Denver region voters in 2004 despite strenuous objections from then-Gov. Bill Owens. There are now six light-rail lines converging downtown with a new one slated for 2016, plus three commuter rail routes expected to serve the newly remodeled downtown Union Station by 2016, with another coming in 2018. Together this marks the most ambitious new transit system built in America since the Washington subway in the 1970s. 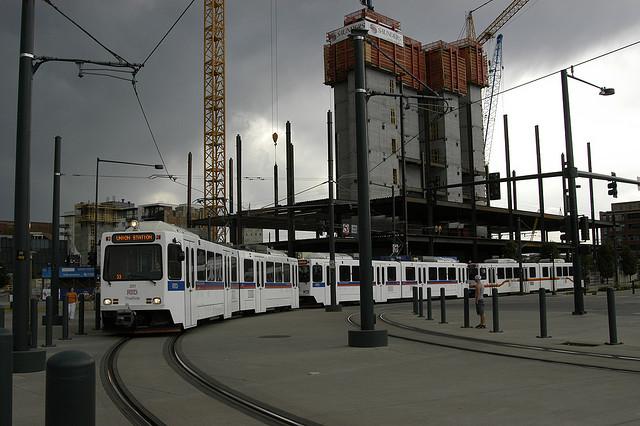 “The 20- to 35-year-olds, they’re not big on cars,” Tom Clark points out. “They want to ride trains to work and entertainment. From an economic point of view, if you can offer them a number ways to get around you’ve got a great advantage.”

Besides its urban amenities and 300+ days of sunshine a year, Denver has become a magnet for newcomers because it makes them feel at home. Michael Leccese, director of the Urban Land Institute-Colorado moved here from Washington, D.C., and remembers how different it felt.

“You could go into someone’s office and say, ‘This is who I am and here’s what I do.’ It’s a really friendly place.”

Tami Door, originally from Detroit, concurs, “The sense of community is great at all levels.  If you have an idea, somebody will listen and take you seriously.”

Denver has become a national leader in the movement to create new places from the ground up that embody the qualities we cherish in traditional neighborhoods.

The most promising project I saw is Belmar, built on the site of what was the Villa Italia mall in suburban Lakewood.  It bustles with the energy of a downtown thanks to walkable streets filled with diversions such as public art, a pub, a town commons, cinemas and a bowling alley as well as upscale shops. Parking is accommodated in a series of small lots and ramps, which for the most part do not detract from the ambiance. Nearby housing and office space provide the key ingredient for an urban experience — a mix of uses within walking distance. The most important takeaway from Belmar is that it’s possible to transform an auto-dominated suburban landscape to a place where people matter as much as cars.

5½ Boost public education (although there are no easy answers)

A possible downside to all the talented people moving to Denver, wonders Gougeon (who moved here from Philadelphia), is whether it contributes to the achievement gap because well-educated newcomers scoop up the best jobs — which is good for the economy but not for the region’s disadvantaged residents.  MSP is not alone in facing a stark racial disparity in economic and educational outcomes.

Reducing the achievement gap throughout Colorado is one mission of the Gates Family Foundation that Gougeon heads.

“We’re closing the gap in Denver schools,” he explains, “but at a pace that will take decades to catch up. About half of all poor kids will not graduate from high school, and only one in 10 will graduate from a four-year college.”

City schools are seeing a jump in test scores, and in a period when public-school enrollment is shrinking in many cities Denver is showing the biggest gains of any big city district in the country. Both trends are explained in part by a switch to neighborhood schools within the context of a citywide choice system, as well as by the city’s growing middle-class population. However it should be noted that Myron Orfield, who charts education trends across the country at the University of Minnesota Law School’s Institute on Metropolitan Opportunity, says Denver is one of the most rapidly re-segregating school districts in the country.

Disparities in achievement among low-income students cannot be solved solely in the classroom. The home environment exerts a big influence on kids’ success in school and beyond. That’s one reason for the Denver Housing Authority’s Healthy Living Initiative, which promotes fitness, good nutrition and social well being as steps to a better life.

This philosophy is showcased at Mariposa, a new community just south of downtown where 278 dilapidated public housing units are in the process of being replaced by attractive mixed-income apartment buildings (1/3 market rate, 1/3 subsidized housing, 1/3 public housing) that Housing Authority senior developer Kimball Crangles says is designed to help close “the gap in education and job opportunity caused by the cycle of poverty.”

Education and employment services are available to residents, together with cooking classes and plots in a community garden for healthier eating. Buildings, streets and public spaces around Mariposa are designed to maximize physical activity. Walking for transportation and recreation is encouraged by wider-than-usual sidewalks and traffic-calming devices to prevent motorists from speeding. An innovative project in one of the newest buildings entices residents to take the stairs over the elevator by reinventing the traditional open staircase (to meet modern fire codes) equipped with a whimsical light and music show that begins whenever you climb up or down.

Thursday: What we can learn from Seattle.