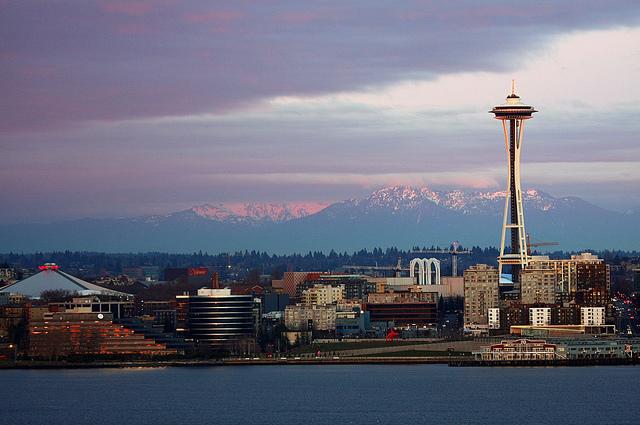 CC/Flickr/Martin Cathrae
In 1962, the world took notice of Seattle as a city on its way up when it staged a world’s fair, symbolized by the futuristic Space Needle tower.

This is the second in a series of three articles about what innovative ideas Minneapolis-St. Paul can borrow from our peer cities, adapted from Jay Walljasper’s new McKnight Foundation report, “A Tale of Three Cities.” First we looked at Denver, now Seattle and on Friday Toronto.

In 1962, the world took notice of Seattle as a city on its way up when it staged a world’s fair, symbolized by the futuristic Space Needle tower. By all accounts the fair, officially known as the Century 21 Exposition, was a success, even turning a profit at the turnstiles with 10 million visitors.

But Seattle’s future looked far from rosy 10 years later when a downturn in the aviation industry, which indirectly counted for as many as one in six jobs, plunged the region into an economic slump so severe that unemployment reached 17 percent.

Those hard times jolted the local community to get serious about diversifying and strengthening its economy, notes Bill Stafford, a former deputy mayor and founder of the Trade Development Alliance of Greater Seattle. The region rebounded, he says, by taking advantage of its collaborative culture, willingness to take risks and global outlook.

Today some of the most world’s most recognizable companies call Seattle home: Microsoft, Starbucks, Amazon, Nordstrom, Costco and REI. The region is projected to generate 1.2 million new jobs by 2040.

But Seattle is known for more than its economic prowess. Pike Place market, grunge rock music, a reputation for environmental awareness, and the iconic Space Needle all put it on the map as an innovative, distinctive and attractive place to live.

“The quality of life, arts and outdoor lifestyle are important to our success,” Stafford underscores.

“We are a high-cost area, but people keep coming here. Google is moving all kinds of staff here. Why did Howard Schultz [of Starbucks] and Jeff Bezos [of Amazon] come here to start their businesses?” And why did Bill Gates come back home from Albuquerque in 1979, bringing 4-year-old Microsoft with him?

Minneapolis-St. Paul (MSP) is also a high-cost place to do business, but we’re not widely recognized outside the Midwest for our strong economy and quality of life, raising questions about how we will fare over the long haul in an increasingly competitive globalized economy.

The Seattle region could be seen as the Twin Cities’ slightly bigger sister. The Census ranks it 15th in metropolitan population (3.9 million) while we stand one notch below at 16th (3.5 million). Both places are home to large, respected state universities, substantial Scandinavian populations, sometime disagreeable weather and a reputation for decisionmaking through consensus-building.

Seattle is also similar to Minneapolis-St. Paul in its populist liberal political traditions. Strong opposition to economic inequality has been voiced throughout town from the 1919 Seattle general strike (when labor unions shut down the city) to the 1999 Battle of Seattle protests against corporate globalization (when activists shut down a World Trade Organization meeting) to last November when socialist Kshama Sawant was elected to the City Council on a platform of raising the minimum wage to $15 an hour. Nonetheless, economic inequality endures in both regions. Segregation of African-Americans and the achievement gap in city schools were cited as major problems facing Seattle by a number of those I interviewed on a recent visit.

Here are some ideas MSP can borrow from Seattle in a range of fields:

“We’re a port city,” Stafford reminds, “and that has shaped us.  Forty percent of jobs here are linked to the international economy. Kids in Seattle schools speak 76 different languages at home.”

As an inland region, Minneapolis-St. Paul has historically focused less on what happens elsewhere.  Even today pointing to Portland or New York as a model for MSP (not to mention Copenhagen or Shanghai) can sometimes elicit an “I-don’t-care” stare.  That doesn’t serve us well in an interconnected world.

2. Expand light rail in all directions 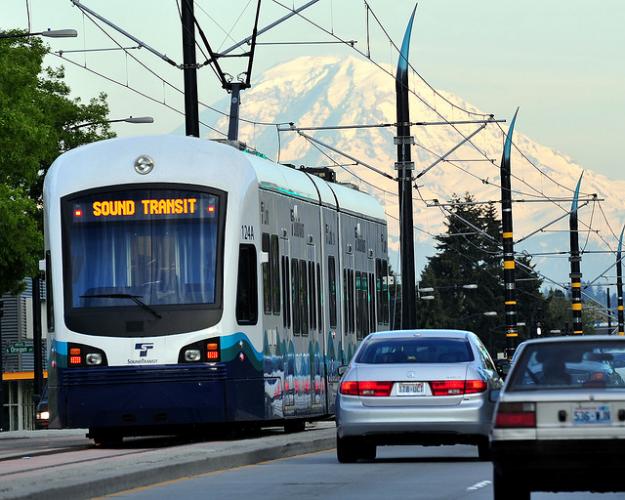 CC/Flickr/Doug Mahugh
Seattle was a latecomer to light rail, but has embraced it — and is planning expansions.

Seattle, however, has been quicker to catch up.

A short light rail line running through downtown Tacoma opened in 2003 and they inaugurated a second line between the airport and downtown Seattle in 2009.  That line is now being extended to the University of Washington and plans are under way to expand light rail service south to Tacoma, east to Redmond (home of Microsoft) and north to Lynwood.

An ambitious streetcar network is also in the works. The South Lake Union line began running in 2007 and a second streetcar line debuts this year, with a third line planned — as well as extensions to the existing lines. The South Lake Union line helped fuel a real-estate boom in a derelict industrial area near downtown, which now sports headquarters for Amazon, REI and the Tommy Bahama clothing chain. Amazon is so convinced that transit connections are essential to its business that it paid for an additional streetcar to be put into service to reduce wait times for its employees. Even Microsoft, which popularized the isolated suburban campus as a corporate ideal, has moved some operations to South Lake Union.

Opponents of light rail in both regions touted better bus service as a more efficient alternative to trains, but Seattle did something about it. Hopping around the city by bus on a Sunday evening, usually a black hole in transit schedules, I never waited very long at a stop.  The buses I rode were comfortable and filled with people of all races, ages and social classes. Even after starting to build rail projects, Seattle also beefed up bus service in the city and suburbs with six “Rapid Ride” lines, which incorporate many of the advantages of rail systems: frequent service, fewer stops, distinctly recognizable stations and signs that announce the next arrival. Unlike most regions, Seattle did not slash bus service after the 2008 economic crisis but is planning cuts now to fill a $75 million shortfall.

Despite steep hills and steady rains, Seattle tops MSP when it comes to walking. The Census Bureau’s American Community Survey finds 8 percent of commuters in the city of Seattle travel by foot, compared to 7 percent in Minneapolis and 6 percent in St. Paul.

Walk Friendly Communities, a national organization pushing for better walking conditions, singles out the city of Seattle for its highest-level platinum honors. (Minneapolis must settle for gold along with 9 other cities.) The organization cites accomplishments such as: 1) the Neighborhood Traffic Calming Program, which installed more than 1,000 traffic circles, plus numerous road diets, and other improvements to help motorists follow speed limits; 2) the Aggressive Driver Response Team, where neighborhoods work with police to curb dangerous drivers; and 3) 2012’s Vulnerable User Law, which zeroes in on negligent but not criminal traffic errors that injure or kill pedestrians and bicyclists.

In the 1960s, the beloved Pike Place Market looked doomed.  The mayor, City Council and large segments of the business community supported plans to demolish it to build a hockey arena. A group of citizens pushed back, however, and in 1971 the market was declared a historic district.  Now it’s the pulsing heart of the city and the most iconic symbol of Seattle.  An entire food district with specialty shops and restaurants has grown up on the surrounding streets. 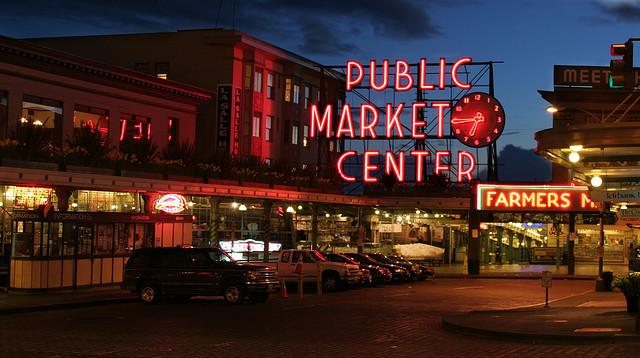 While St. Paul boasts a farmer’s market befitting the agricultural bounty of our Midwest, the Minneapolis Farmers’ Market — hidden in the shadow of a freeway — is a missed opportunity.  It could be improved through better connections to local farmers and to the rest of the city.  Both the Minneapolis and St. Paul markets need to become year-round affairs, a move that some day would look as brilliant to us as saving Pike Place Market does to Seattleites today.

The Capitol Hill neighborhood in Seattle is historic, but not in the way you’d expect. First there’s no Capitol, that’s 60 miles away in Olympia. As Seattle’s longtime countercultural mecca, the historical ambience here is more funky than pristine — think a tavern where grunge bands Nirvana and Pearl Jam hung out rather than painstakingly restored Victorian houses.

That’s no reason the neighborhood’s character should be simply wiped away, says Mark Huppert, a real-estate developer who is now senior director of the Preservation Green Lab, a research-and-development team of the National Trust for Historic Preservation based in Seattle. Local preservation activists pushed to enact an innovative tool known as a “conservation overlay.”

Conservation districts offer different protections from historic districts, focusing more on maintaining overall character and less on particular buildings. “The goal is not to stop development, but to help think differently about the historic resources here. Growth is going to come here regardless — but we want some protections in place,” Huppert says

Minneapolis is currently debating a proposal to create conservation districts, which some people worry will become an impediment to density. The experience in Seattle shows that such regulations don’t necessarily obstruct development, but actually aid it by reassuring people that new projects will fit in with old neighborhoods.

Bellevue (pop. 122,000), once a bedroom burg for commuters, is making moves to become a city in its own right. A downtown district with gleaming office towers, high-rise condos, high-speed bus service and hearty nightlife rises like the Emerald City out of a tangle of subdivisions and strip malls. Confirmed urban partisans might scoff at the chain stores and 5-lane roads, but everyone else seems to appreciate an opportunity for street life and pizzazz, if only for a few blocks.

9. Reinvent the mall as a community center

Downtown is not the only surprising spot in Bellevue. Crossroads, a 1970s-era shopping mall, has reinvented itself as something approaching a town center.

You notice something different about this mall immediately. Businesses have grown up in the parking lot — a veterinarian office, cupcake shop, movie theaters — connected to the main mall with crosswalks, as if these traffic lanes were downtown streets. All the outlets in the food court — Korean BBQ, Mexican, sushi, Middle Eastern, pizza — are local restaurateurs, not fast-food chains.

There’s an Old Navy, Jo-Ann’s Fabrics and Pier One, of course, but also a grocery store, a used book store, public library and branch of City Hall, where business can be conducted in Spanish, Chinese, Bengali. Hindi and Urdu. This is not your mother’s mall. The lesson here is that to survive, shopping centers must become places to do many things besides shopping.

Friday: What we can learn from Toronto.

9 lessons we can learn from Seattle