For all the talk in Duluth of governing success in the recent past and unity going forward, the underlying current of last weekend’s DFL Convention was anxiety.

Throughout the day Saturday, speaker after speaker talked of the need for DFLers to get their base to the polls in November.

“It’s not my hard work that will decide this election, it’s yours,’’ Sen. Al Franken told the delegates, reminding them that there were “just 157 days” until election day. (Now, there are 155.)

There were constant reminders to delegates of what happened in 2010, when DFL turnout was low and Republicans swept to control of the state House and Senate. And 2010 wasn’t a fluke. Historically, DFL voters haven’t had the gumption to get to the polls in off-year elections.

How much enthusiasm can the party raise? Certainly, at the state level there are progressive legislative triumphs.

But there’s also this reality: It will be the people running at the top of the ticket, Franken and Gov. Mark Dayton, who hold the fate of the party in their hands. If they don’t win, those running down-ticket are going to be in trouble. Remember, Dayton and Franken each won office only after recounts.

And there’s another nagging problem that could grow into a major headache for the DFL: how to handle mining. If the environmentalists keep pushing for more and more environmental impact statements, they could push the Iron Range — long a party stronghold — into the laps of the GOP … or at least push longtime DFLers into apathy.

Throughout the day Saturday, there were meetings among Rangers and party officials over how to handle mining.

Even a milquetoast resolution party members had designed to try to please everybody was found to be offensive by the Rangers. (The resolution essentially said the DFL supports mining that doesn’t contaminate the water, etc.)

“If they’re going to do a resolution like this on mining, why not on 3M, why not on every industry in the state?’’ asked Sen. Dave Tomassoni, who is from Chisholm and was a convention delegate.

Tomassoni held up his cell phone, noting that virtually everyone at the convention — including the most ardent environmentalists — had one.

“There are 39 minerals in this little baby,’’ Tomassoni said. “It may surprise some of the people here that these minerals don’t just drop out of the sky. They’re mined. What, is it okay if the mining is done by some 12-year-old in a third world country, but it’s wrong if we [Rangers] do it?’’

Tomassoni, and other Rangers, seemed genuinely angry over the greener — at all costs — direction of the party.

“At some point in time, this party has to realize they need the Iron Range,’’ Tomassoni said, noting there already are “Dump Otto’’ signs popping up on the Range.

Those signs regard Rebecca Otto, the DFL’s incumbent state auditor, who won her last election by 1.2 percent over the GOP’s Patricia Anderson. Since then, Otto angered Rangers, when, as a member of the state’s executive council, she voted “no’’ on allowing 31 exploratory nonferrous mining leases. (She was the only “no” vote, so the exploratory leases moved forward.)

Understand, Rangers involved in politics love trash-talking. Their actions don’t always follow their words. And, on Saturday, in Otto’s case, there were only a sprinkling of “nay’’ votes when she was endorsed, by acclamation. 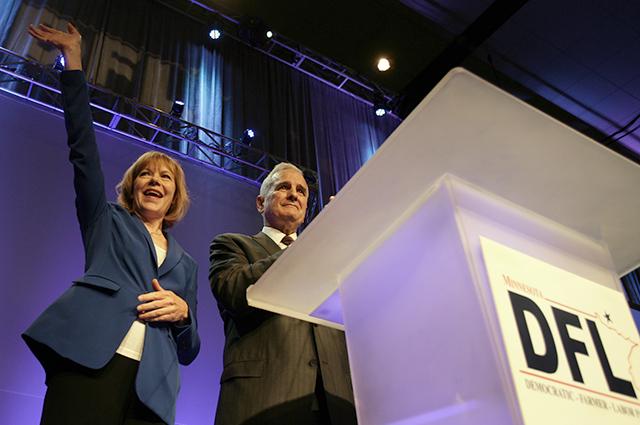 Still the Range has to be a major DFL concern. Franken and Dayton need enthusiastic support throughout northeastern Minnesota, and for the moment they’re waffling on issues of huge importance to Rangers.

Listen to what Joe Begich, a former state legislator who has been attending DFL conventions since 1952, has to say about wafflers:

“If they’re seen as anti-copper, Dayton’s going down, Franken’s going down. And right now they’re both on the fence. They say things like, ‘We have to read another report.’ Tell me, what are you going to read that you haven’t already read? We’ve got young guys who need jobs. They’re fed up with this.’’

It should be noted that incumbent Democratic Congressman Rick Nolan stands in good stead with Range interests, though he’s expected to be in an extremely close race with Republican Stewart Mills, who has toiled up the ladder to the vice presidency of Mills Fleet Farm, which his grandfather founded.

And it should be noted that mining was one of those inside baseball issues that always seem so important to delegates of conventions, but don’t matter a bit to people who prefer to spend their late spring days ignoring politics altogether.

During Sunday’s session, all resolutions referring to mining were dropped — which was the most peaceful solution for all DFLers. That’s a question that individual candidates still will need to deal with, but it gives all more time.

This may have seemed like a boring convention to most, though party leaders and speechifiers were trying to say it was exciting.

“What a great day we had,’’ said Ken Martin, the DFL’s chairman. “You saw the energy!”

Hmmm. Not really. But there were reasons, beyond the age of the delegates (this was a white-haired crew) for all the yawns.

First, DFLers needed to vote endorsement for only one office — secretary of state — because they have incumbents in all other offices. Steve Simon defeated Debra Hilstrom on the first ballot. Without any other contested endorsing races, there was little for delegates to do.

Even Dayton admitted that in terms of newsmaking excitement, the DFLers weren’t putting on the show that Republicans put on.

“Why aren’t you in Rochester?’’ Dayton asked reporters after his speech Saturday. “You must have drawn the short straw.’’

There were some interesting asides in Duluth.

For example, Rep. Ryan Winkler was handing out mugs and free coffee, his way of “thanking’’ people who helped him push an increase in the minimum wage. This led to at least some wondering what higher office Winkler may have in mind.

But the representative from Golden Valley sort of denied that he was thinking loftier political thoughts, though he did admit that free mugs and coffee likely would raise his profile.

One of the most active booths at the convention was the “I’m Ready For Hillary’’ booth. A considerable number of people were signing up to become supporters of the national organization set up to urge Hillary Clinton to run for president in 2016.

But before 2016, there is a huge hurdle for DFLers to clear.