Congress is rapidly approaching another fiscal cliff — and many of the nation’s highway, bridge and transit projects could be the major casualties.

The federal law that sets national policy and investment levels for highways, transit and other forms of surface transportation is set to expire Oct. 1. Even before then, however, the highway trust fund that channels this federal aid to states and local governments is expected to run out of money by September.

In February, during an event at St. Paul’s Union Depot, President Obama proposed a four-year extension of the transportation law and funding it with the help of a one-time, $150 billion infusion of revenues from corporate tax reform.

“If Congress doesn’t finish a transportation bill by the end of the summer, we could see construction projects stop in their tracks, machines sitting idle, workers off the job,” Obama told a crowd of about 1,300 at the depot.

Thus far, however, neither house has made much progress toward either filling the trust fund’s impending shortfall or extending the soon-to-expire transportation law.

The problem is no surprise to state transportation officials and policy makers. At the start of the last Minnesota legislative session, the Senate and House transportation committees were briefed on the issue by Derrell Turner, head of the Federal Highway Administration’s Minnesota office. He warned that the trust fund is “perilously close to being insolvent.”

“If the balance were to drop low enough, the department might be forced to slow reimbursement payments and make only partial payments to states for road and bridge projects,” Turner said.

Charles Zelle, commissioner of the Minnesota Department of Transportation (MnDOT), said at the time that the state has sufficient reserves to manage cash flow in the short-term “so that projects don’t stop. But we would not be able to sustain that over time without a great reduction in our program.”

Kevin Gutknecht, a spokesman for MnDOT, said this week that the department’s summer construction program — some 308 projects totaling $1.1 billion — would not be affected if the federal trust fund runs out of money. But he said the same might not be true for counties and cities, which may not have the same kind of reserve funds as the state.

No postponed projects — yet

Abbey Bryduck, transportation policy specialist for the Association of Minnesota Counties, said she has not heard of any local projects that have been postponed. But she added: “I do know there is concern and that there are many projects that won’t be able to move forward if the trust fund becomes insolvent.”

Congress established the highway trust fund in 1956 to provide a stable funding source for highways and bridges, and later expanded it to include transit and highway safety programs. It is funded with revenues from the gasoline tax and other user-related fees.

However, the federal gasoline tax — currently 18.4 cents a gallon — has not been raised since 1993. And growth has slowed in recent years with the introduction of more fuel-efficient vehicles and the decline in total vehicle miles traveled.  Meanwhile, highway construction costs have increased by more than 70 percent in the last two decades, according to the Federal Highway Administration. 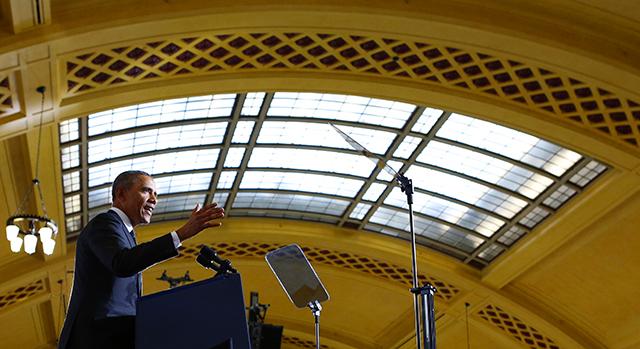 REUTERS/Kevin Lamarque
“If Congress doesn’t finish a transportation bill by the end of the summer, we could see construction projects stop in their tracks, machines sitting idle, workers off the job,” President Obama told a crowd at Union Depot in February.

As a result, Congress has been forced over the last six years to transfer $55 billion in general-fund revenues into the highway trust fund just to maintain funding at the levels promised in the federal transportation law.

Federal funding accounts for more than half of the capital transportation budgets in all but 15 states, according to Transportation for America (PDF), a Washington, D.C.-based advocacy group. For Minnesota, the feds are providing nearly $740 million this year in highway and transit funds, or 60.9 percent of the state’s capital budget for these purposes.

Not surprisingly, transportation advocates say federal funding has not kept pace with the needs. In its latest infrastructure report card, issued every four years, the American Society of Civil Engineers gave low grades to the condition of the nation’s roads (D), bridges (C+) and transit (D).

In Minnesota, MnDOT reports that 50 percent of the state’s highway pavements and 35 percent of its bridges are more than 50 years old, and says the highway system faces a $12 billion funding gap over the next 20 years.

Transportation historically has been a bipartisan issue — and it still makes for some unlikely political allies. Earlier this year, a coalition of 17 governors called on Congress to plug the hole in the highway trust fund and avert a transportation funding crisis. The group spanned the ideological spectrum from Minnesota’s Mark Dayton on the left to Wisconsin’s Scott Walker on the right.

However, with a divided Congress, few issues seem to escape partisan gridlock. Later this month (June 17-19), a group of about 50 members of the Minnesota Transportation Alliance will travel to Washington to press for congressional action. They will include local officials, contractors, engineers and transit advocates.

Margaret Donahoe, executive director of the alliance, said her group would like to see not just another short-term fix of the trust fund, but approval of a new, multi-year transportation law.  Formulas and funding typically have been set in law for six years at a time so states and local governments know what to expect in the planning, engineering and construction of projects.

“They keep kicking the can down the road,” Donahoe said. “Congress really needs to come up with a plan instead of these short-term extensions all of the time.”