President Barack Obama made a stop in Minneapolis Thursday as he travels the country touting economic progress and Democratic policies ahead of a contentious midterm election.

Obama, drinking hot tea and wearing a simple blue button-down shirt, spent more than an hour answering questions from Minnesotans at Minnehaha Park in Minneapolis. Questions from the dominantly Democratic crowd hit on everything from climate change, gun violence and the rising costs of higher education to efforts in Washington, D.C., to address the pay gap between men and women. But the president’s opening and closing remarks homed in on the economy.

“In just about every economic measure, we are better off now than we were before I came into office,” Obama opened with the crowd. “But people are still struggling. There are a lot of people who work really hard, do the right thing, are responsible, but still find at the end of the month that they aren’t getting ahead.”

He earned loud cheers from the crowd when he mentioned efforts for flexible workplaces, paid family leave, increasing the minimum wage and equal pay for all workers. He touted a bill he signed early in his presidency that allows women to sue for discrimination when they find out they are being paid less than a man, and he called on Congress to pass the Paycheck Fairness Act.

“This is a family issue, not a gender issue,” he said.

Before arriving in Minnehaha Park Obama met Rebekah Erler, a 36-year-old woman who wrote a letter to the president in March, at Matt’s Bar in south Minneapolis. Over iced tea and the famous “Jucy Lucy” – a burger with cheese cooked inside the patty – Erler told Obama about how her family was hit by the economic downturn.

Erler said her husband lost his construction business and relocated their family to Minneapolis. She described her struggles raising her two school-aged boys while going back to community college for career training.

“If I’ve got one message today … it’s the same message that I gave to that young mom,” Obama told the crowd. “You’re the reason I ran for office. I grew up not in tough circumstances, but I was you guys.”

“I don’t want you to be cynical,” he added, before leaving the town hall. “Hope is better.”

In attendance at the town hall was a who’s who of local and state politicians, including Gov. Mark Dayton, Minneapolis Mayor Betsy Hodges, St. Paul Mayor Chris Coleman, Rep. Keith Ellison and members of the Minneapolis City Council.

In the evening, Obama will attend a fundraiser at the home of Sam and Sylvia Kaplan for the Democratic Congressional Campaign Committee (DCCC). The Kaplans, longtime Democratic donors, will host Minnesota’s congressional Democrats, DCCC Chairman Steve Israel and House Minority Leader Nancy Pelosi, among others.

Obama will speak at public ticketed event at the Lake Harriet Bandshell in Minneapolis Friday morning before leaving the state. 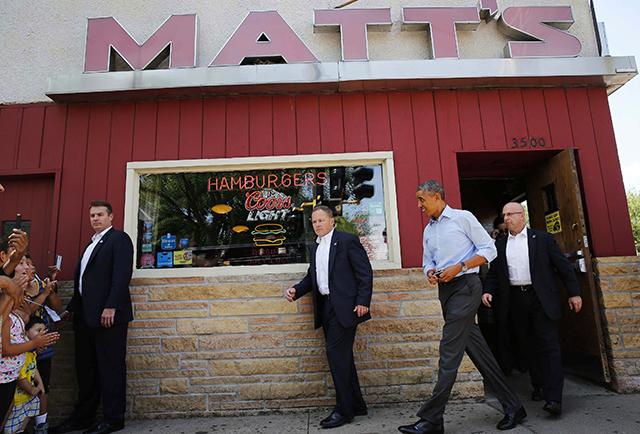