DFL state Rep. Will Morgan understands the woes of representing a group of voters that swing back and forth with national political winds.

He was first elected to his Burnsville-area district in 2006, a massive wave year for Democrats over public dissatisfaction with George W. Bush and his handling of the Iraq War. But Morgan was just as quickly shown the door in 2010, a year when voters angered by the health-care overhaul helped Republicans take control of the Legislature for the first time in nearly 40 years. Then in 2012, with all new district maps and President Obama and two unpopular GOP-led constitutional amendments on the ballot, Morgan was swept right back into office with new DFL majorities in the House and Senate.

He’ll spend this summer and fall trying to figure out which way the wind is blowing in 2014. Morgan is one of the top targets on a list being cultivated by legislative Republicans and GOP-affiliated groups in the race for the state House this year. Senators are not on the ballot until 2016.

The GOP need just seven seats in the 73-61 body to regain the majority from House Democrats, but Minority Leader Kurt Daudt has said there are nearly 20 vulnerable seats held by Democrats currently. Facing a midterm election, in which Democratic voter participation drops considerably, many pundits see the race for the state House as Minnesota Republicans’ most realistic opportunity to gain a foothold in a state where they currently hold no power.

“There’s a lot of seats out there that we feel are competitive,” Daudt said. “We try to not look at it as a broad picture but look at it in each district, and I think we feel very good about where we are.”

For now, top political operatives working for each caucus are keeping their exact list of targets private. Targeted districts often change through the course of the campaign, as ongoing polling and strong candidates can shift the focus and concentration of resources. House Republicans have raised $219,100 so far this year, with $618,175 in cash. Democrats in the House have raised $596,907, with more than $1 million on hand to spend.

But independent, third-party spending groups on the Republican side have already started spending in rural and suburban districts currently held by Democrats that they think are vulnerable. Americans For Prosperity, the state-chapter of the national Koch brother’s funded group, has already put out mailers on candidates in suburban districts like Morgan’s Burnsville and Apple Valley district, in Edina, where Reps. Paul Rosenthal and Republican-turned-DFLer Ron Erhardt hold seats, and in wealthy western suburbs like Minnetonka. Freshman DFL Rep. Yvonne Selcer holds a seat there that she won by less than 1 percent of the vote in 2012. They are also targeting two seats in Eagan that were won back by Democrats in 2012.

But the biggest potential area to pick up seats for the Republicans is in rural Minnesota, a battleground in which GOP operative Ben Golnik sees as many as nine DFL seats in play.

Those are all seats that in 2012 voted more than 50 percent in favor of Republican presidential candidate Mitt Romney, including two seats near Willmar and in rural areas near Baxter, Elbow Lake and Hinckley. DFL Rep. Joe Radinovich, a freshman from Crosby who won his race by less than 350 votes in 2012, is high on a list of GOP targets because of the conservative nature of his district.

Golnik’s independent group, the MN Jobs Coalition, aims to talk about spending and economic issues on the campaign trail. He’s also been hitting Democrats hard on the state’s health-insurance exchange, MNsure, as well as a new Senate office-building project that was given a stamp of approval by Democrats in the House last session.

“We are focusing on jobs, economy, taxes and spending, we can say they all voted for the DFL tax bill, that included the $90 million Senate office building, and they all voted for MNsure,” he said. “In those areas it’s going to be tough. The messaging on MNsure is going to be: [rural DFL] Reps. Paul Marquart or Joe Radinovich brought Obamacare to Minnesota, which is MNsure. We will tie them closely to that.” 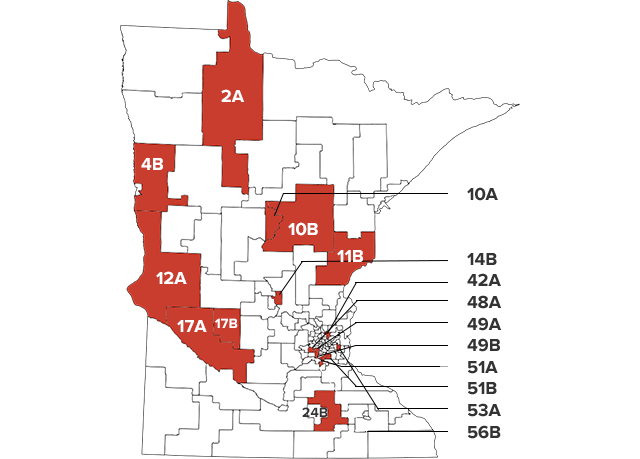 Democrats spent much of the session focusing their message on rural Minnesota, passing rural broadband expansion and funding for road and bridge projects in the far-flung regions of the state, but Golnik says “it’s going to be pretty easy to tie them to the DFL leadership in Minneapolis and St. Paul” on issues like property taxes.

“They are going to say we raised taxes on the wealthiest 2 percent to cut property taxes,” Golnik said, listing off counties where property-tax levies went up. “That’s another broken promise that they have to own up to.”

Democrats are on the mostly-in-defense mode this fall, but there are a handful of districts they’d like to try to steal from Republicans.

Bernie Hesse, an organizer with the UFCW Local 1189 union, said unions and DFL groups are eyeing a pickup in a Woodbury-area House seat where GOP Rep. Andrea Kieffer is retiring after two terms. Former Deputy Republican Party of Minnesota Chairwoman Kelly Fenton is seeking that seat, but Democrats say they’ve fielded a strong candidate in Kay Hendrikson, who has worked in the private sector and in human services and IT at the local government level. They are also eyeing a St. Cloud-area seat held by GOP Rep. Tama Theis and the Stillwater-area seat held by two-term Rep. Kathy Lohmer.

Other operatives say they are also taking a look at close losses for the DFL in 2012, including GOP Rep. Mark Uglem’s seat near Champlin, which he won by less than 5 percent of the vote, GOP Rep. Steve Green’s seat in north central part of Minnesota, which he won by 2 percent of the vote, and even GOP Rep. Mary Franson’s seat in Alexandria, which is in a very conservative part of the state but was the subject of a brief recount in 2012.

“We’ve recruited strong candidates in districts that Republicans hold where we feel we can be competitive,” said Zach Rodvold, campaign manager for the House DFL. “When you combine that with our accomplishments over the last two sessions and our vision for the future, we can make the case to Minnesotans that they can continue the progress we’ve made or they can go back to the gridlock under Republican majorities.” 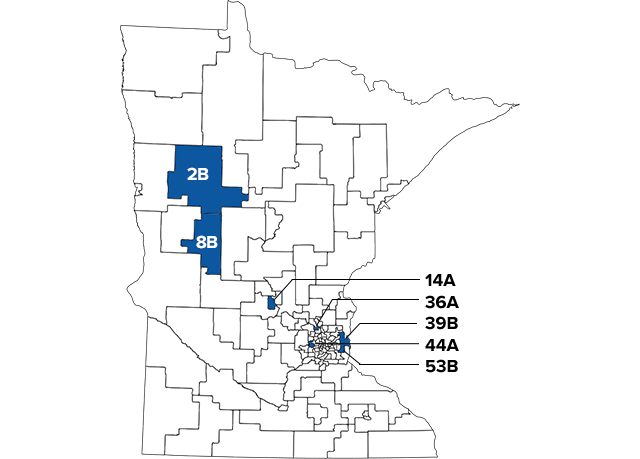 Democrats will benefit electorally from an economy that appears to be on the upswing, but their success will still hinge on getting happy voters out to the polls this year. The DFL Party has built a strong voter file over the last few years and operatives hope DFL Gov. Mark Dayton and U.S. Sen. Al Franken are strong anchors to the ticket. Hesse said a lot of their union money will go into turning out the vote in DFL strongholds like Duluth, where turnout was low in bad DFL years like 2010.

“We have to think of something that gives people a reason to get out and vote. The DFL has to quit saying the middle class, we are working class,” Hesse said. “We have to figure out how to connect with the disconnected, and we need to talk about jobs.”

Morgan has gotten to know his Republican challenger Roz Peterson fairly well. The eight-year member of the Lakeville School Board challenged him in 2012 as well and has been campaigning ever since she lost by less than 1 percent of the vote that year.

“There is some concern that if you raise spending by 12 percent it’s going to have repercussions. That money has to come from somewhere. What’s the sustainability of that?” Peterson said on a break from the trail. “The one party rule is troublesome and even the lobbyists don’t like that. People want a balanced approach.”

“November is a long ways away, but I’m cautiously optimistic,” she added. “I know it won’t be without a hard fought fight.”

But Morgan has spent his time at the doors comparing two years in DFL control to the two years prior, when Republicans controlled the Legislature and Dayton held the governor’s office. “People feel good about the successes we’ve had,” he said. “They like that there’s so much less gridlock in St. Paul.”

Party without power: How the Minnesota GOP plans to take over the House