The shooting of 18-year-old Michael Brown by a police officer in Ferguson, Missouri, happened the weekend before Minneapolis Mayor Betsy Hodges delivered her first budget address to the City Council. So the initiatives outlined in the budget regarding the Minneapolis Police Department were well in the works before the incident.

But as the sometimes-violent standoff between Ferguson police and members and supporters of the town’s black community received more media coverage, the issues raised in the budget gained resonance.

Hodges called for an increase in the number of sworn officers in the Minneapolis Police Department, partly to allow them time to get out of squad cars more often and develop relationships with residents and business owners. She also proposed paying for two additional classes of community service officer classes. Long considered a stepping-stone to becoming sworn officers, the CSO positions offer one method to recruit more people of color to the department.

Finally, Hodges proposed fully funding a project she raised during her successful campaign for mayor last year: putting body cameras on each officer. “Body cams have been shown to decrease both use of force and complaints about excessive force,” Hodges said in her budget address to the council.

While the initiatives predated Ferguson, they are attempts to address many of the same issues, Hodges said in an interview Tuesday (and in a blog entry she posted Sunday on mayorhodges.com).

“I have felt that tension as I have walked on the North Side, I have felt it as I walk downtown, and I felt is as I have walked the first floor of City Hall as our officers have come in and out,” she wrote. “The tension we feel here is not about Ferguson, not really. It is about Minneapolis.”

But are the proposed changes enough to alter what Hodges wrote is a “legacy of brutal oppression of people of color in this country, this state and this city”?

“It is clear to me these things are necessary,” Hodges said Tuesday. “It is not yet obvious to anyone what will be sufficient.”

MPD diversity ‘not where we want to be’

One issued raised by Ferguson is the racial disparity between the community and the police force. The town near St. Louis is 67 percent black — yet the police force of 53 has three or four black officers (reporting of the number has differed).

The Minneapolis Park Police is even less diverse than the MPD, with five people of color among the 32 officers, just two of whom are black. (St. Paul, which is 60 percent white, has a police force that is 82 percent white.)

And the hiring spree Minneapolis is undertaking in response to a wave of retirements may not do much to change the overall numbers. The new batch of prospective sworn officers and community-service officers (including recruits and cadets) is around 70 percent white.

The problem with minority hiring is not that nonwhites aren’t making the grade, Hodges said, it’s that they’re not applying.

“I’ve had more than one meeting with folks in the Somali community, and they are very eager to have more Somali police officers,” Hodges said. “And what I say is, ‘If we’re going to have more, you have to apply, and you have to ask people to apply.’ ”

Council Member Abdi Warsame, the city’s first Somali-American council member, shares Hodges concerns about the paucity of minority applications. “We need to look into why,” he said.

And like Hodges, Warsame said he thinks a racially diverse police force is important to improve relations between people of color and the department. “We don’t want to see anything like [Ferguson] happen in Minneapolis or Minnesota.”

Warsame welcomes Hodges’ push to get officers out of their cars more often. “The children and families in my ward have welcomed them,” he said of his 6th Ward, which centers on Cedar-Riverside. “It’s important to build rapport with the community.” 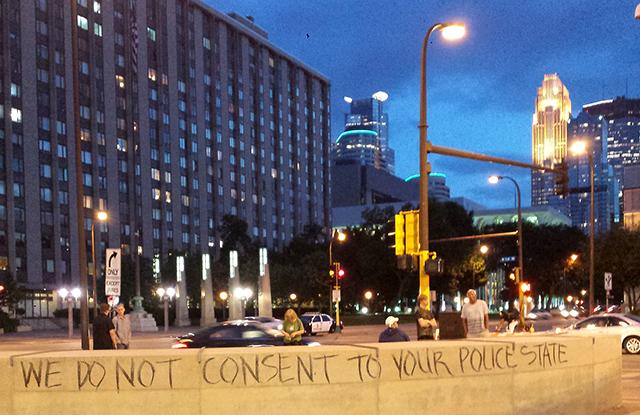 But Ward 5 Council Member Blong Yang, who heads the Public Safety, Civil Rights and Emergency Management Committee, said the department is woefully short of having enough officers to change how they patrol. He said there are only about 770 sworn officers now, and the department has a goal of adding 100 officers. And even that may not been enough, he said: “At 860-870, we’ll still have an issue with staffing.”

As for diversity among officers, Yang said,  “I don’t think we’re close to where we want to be” and said the community service officer recruiting is suffering from the same shortcomings as recruitment for sworn officers. “Sometimes you can try hard and still not reach your goals if you’re not doing the right thing, or doing what you’ve always done,” he said.

And which of those afflicts Minneapolis’ effort when it comes to diversifying the police force?

“A little of both,” Yang said. He noted the achievement gap among African-Amercans in earning the college degrees required to apply to join the police department, though the CSO program works to remedy that. And he cited the disconnect between racial minority groups and the very idea of being a cop.

Recent national polling displays vast differences between black and while people when it comes to attitudes about police. Though 30 percent of all adults rank police departments as “excellent” or “good” in how they hold officers accountable when misconduct occurs, according to a Pew Research Center poll, only 10 percent of black respondents ranked police similarly.

Hodges said she thinks the initiatives in her budget — community policing, diversity among officers and body cameras — could help increase those numbers locally. As “officers spend more time with people, they get to know the community,” Hodges said. “When something does go wrong, they have more time to spend with people and you need more police officers to do that effectively.”

“I have high expectations for officers and want to hold them accountable while understanding there are thousands and thousands of interactions with the community each year and they are doing a great job out there,” Hodges said. “But there are some officers who misbehave, and it makes the rest of the officers look bad, and it also heightens some communities’ mistrust of the police.”

One of Hodges’ most high-profile budget initiatives has Yang’s support — body cameras.

“It would be very good for public trust,” Yang said. He cited the conflicting versions of what happened during the recent confrontation between officers and activist Al Flowers as an example of how they could help. “It would have told us what was said, what happened,” Yang said.

John Delmonico, president of the Police Officers Federation of Minneapolis, told MPR that he thinks cameras could be helpful, but is waiting for policies and procedures regarding their use,  something not yet released by Chief Janeé Harteau. The first three dozen cameras are expected to be in use by fall with full roll out next year.

Support for the cameras has also come from the ACLU of Minnesota, as long as the policies are consistent, said Chuck Samuelson, the organization’s executive director. “Officers can’t pick and choose when to turn the cameras on.”

The ACLU believes the data gathered is public data. And while there can be editing done to protect privacy that editing should never be done “by the guy who was wearing it.”

Samuelson also sees comparisons with Ferguson in Minneapolis, and thinks a culture change is needed in the department, something he believes community policing could help remedy. “North Minneapolis could be the next Ferguson,” Samuelson said. “The Minneapolis police patrol there like an occupying force.”

For Hodges, the attention given Ferguson puts the spotlight on issues that she has been talking about for nearly two years.

“It highlighted for some people issues around race — certainly about police and community relations but issues about race generally,” she said. “The tensions around it are higher when you have a situation like that. It’s an opportunity for us to propel the work forward even more.”

Cops and Cams: How Mayor Hodges hopes to change the MPD’s relationship with the city’s black community