The DFL primary race between longtime incumbent Rep. Phyllis Kahn and Somali challenger Mohamud Noor was contentious from day one. In February, a precinct caucus meeting in the race ended abruptly in violence. In April, Noor managed to block Kahn from getting the DFL endorsement. And in the months that followed, allegations of voter fraud spilled into the race. Even the day before the primary election, rumors circled that fights could break out at polling places, requiring the city of Minneapolis to put extra staff on duty.

But Tuesday, the race ended quietly with calls for unity and stronger representation of the diverse state House district.

Kahn, who was fighting to secure her 22nd term representing House District 60B, won the race with 54 percent of the vote to Noor’s 46 percent. Noor was running to be the first Somali-American elected to a state legislature in the nation, and his ability to turn out the politically active East African community in the district had Kahn supporters worried before a low-turnout August primary.

In the end, Kahn dominated in 9 out of 12 precincts in the district. Noor turned out many of his votes in the district through early absentee balloting, but it wasn’t enough to surpass the numbers Kahn’s team managed to bring out on primary day.

“I’m relieved,” a happy Kahn said at her victory party Tuesday night at Mattie’s on Main. She had been making phone calls until 15 minutes before polls closed, and had spent her summer knocking on doors across the district.

Supporters in the small bar eagerly congratulated Kahn and shouted “Four more decades!” Kahn was first elected to represent the district in 1972, and is now the longest serving female legislator in the state House. She acknowledged this was one of her toughest elections ever — “My first [race] was pretty tough too,” she noted.

“We were very cautious,” she said. “We wouldn’t let anyone call it a victory party. We only called it an election party.” 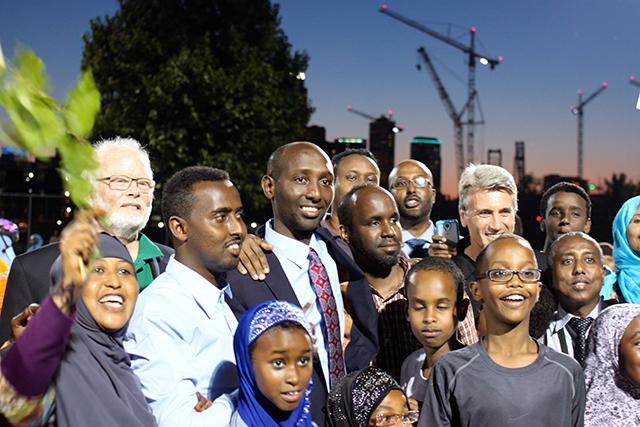 Noor’s supporters sprawled out across Currie Park in the Cedar-Riverside neighborhood Tuesday evening, many dancing and celebrating as they waited for results to roll in. Supporters like former Minneapolis Mayor R.T. Rybak were on hand. But when it became clear that he had lost the race, Noor quieted the celebration to address the crowd.

Noor said Kahn had done a lot for the district and the state, and he planned to call her and congratulate her on her victory. But he added that the race would force her and other politicians to pay more attention to the Somali community.

For her part, Kahn agrees. She said the challenging primary helped her reconnect with more voters in her district than usually possible.

“The thing about having this kind of a tough race is you get much more in touch with the people in your district, and I expect to use that when I go on to the Legislature in terms of propelling the desires and the wants and needs of the district,” she said. “Not that I haven’t done that in the past, but there’s much more connectivety now.”