Should the personal beliefs of a CEO matter when a private company does business with a public entity?

That question has come up in the ongoing bidding process to run the day-to-day operations of the new Minnesota Vikings stadium when it opens in 2016. In the business, it’s called facilities management, and — not surprisingly — some of the best-known facilities management companies in the world have submitted their names to the Minnesota Sports Facilities Authority (MSFA) to win the contract.

It’s a group that includes two Pennsylvania-based companies, Global Spectrum and SMG; one local TV station, The CW23; and Los Angeles-based AEG, which already runs the Target Center in Minneapolis.

That last bit is where things have the potential to get sticky. AEG is a wholly owned subsidiary of the Anschutz Company, which is run by conservative billionaire Philip Anschutz —well-known for quietly putting his money behind national groups that support conservative causes and oppose gay marriage. And the MSFA is making its decision at a time when the stadium’s chief tenant, the Vikings, have come under scrutiny for allegations made by former punter Chris Kluwe that the team fostered an intolerant, homophobic environment.

AEG officials say Anschutz’s personal and political beliefs have never come into play in the operations of the company and its affiliates, which run more than 100 stadiums in the U.S. and overseas. Indeed, the company’s operation of the Target Center has gone smoothly for the city.

But for at least one local politician, AEG’s involvement raises concerns about whom the state chooses to do business with in operating a stadium built with no small amount of public money. The state is currently on the hook to fund $348 million of the nearly $1 billion facility, with another $150 million coming from the city of Minneapolis.

“It is an ethical dilemma,” said state Sen. Scott Dibble, DFL-Minneapolis, who led the state’s successful effort to legalize gay marriage in 2013. “In [Anschutz’s] personal role he has advocated to limit the freedoms and rights of citizens to marry whom they choose. He is clearly anti-gay and supports anti-gay efforts. It should absolutely be taken into consideration.”

Complicating the matter is the Vikings’ recent run of bad PR around LGBT issues. Last month, special teams coordinator Michael Priefer admitted to making anti-gay remarks — including “putting all the gays on an island and nuking it” — in a 2012 conversation with Kluwe, who has been an outspoken champion of gay rights. The team gave a three-game suspension to Priefer, who said the comments were made in jest.

Dibble recently joined 17 other lawmakers in calling on the Vikings to enact a tougher punishment on Priefer, and the current controversy over the coach’s “violently homophobic” comments, Dibble says, doesn’t make the potential of doing business with AEG look any better. “The Vikings say that this is unacceptable and they are taking steps to make sure their organization upholds the highest level of tolerance and respect,” he said. “But I think they need to think about who they are contracting with and doing business with.”

Anschutz began his career as an oil explorer, hitting a large deposit in Wyoming that allowed him to expand his business empire to everything from professional sports teams to newspapers and the movie business. He owns The Weekly Standard, one of the most influential conservative magazines in the nation, and has had his hand in the production of several major films with moral and political messages, including “Holes,” C.S. Lewis’ “Chronicles of Narnia,” and the documentary, “Waiting for ‘Superman.’ ” In 2013, Forbes ranked Anschutz the 38th richest person in America, with a net worth of more than $10 billion. 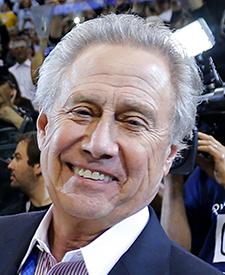 Anschutz has used his billions to campaign against gay marriage and support other conservative Christian causes. In the early 1990s, he helped fund a ballot initiative in Colorado that aimed to overturn state laws protecting gay rights. The amendment passed on the ballot, but was ultimately ruled unconstitutional by the Supreme Court. He has also funded number of other conservative organizations, including the Institute for American Values. The think tank’s founder, David Blankenhorn, testified against gay marriage in the trial on the constitutionality of Proposition 8, California’s ban on same-sex marriage.

But Anschutz giving stretches beyond his conservative views. Much of his money has gone to charities in his home state of Colorado through The Anschutz Foundation, which was established over 30 years ago as a private charitable organization and is separate from AEG. The only commonality between the two is that Anschutz serves as chair.

“In recent years, TAF has annually made in excess of 500 individual grants totaling $50 million to a wide variety of charitable non-profit organizations who focus on youth development and education, health, human services, core principles and quality of life. Included in core principles are constitutional rights which includes religious freedom,” AEG spokesman Michael Roth said in a statement to MinnPost. “The largest funding areas are youth development and education, health and human services.”

The MSFA expects to award the contract sometime this month, but a spokeswoman couldn’t comment on the ongoing bidding process. “The MSFA is conducting a competitive bid process to choose a third party operator to operate, maintain and market the new Minnesota multi-purpose stadium,” MSFA spokeswoman Jennifer Hathaway said in a statement. “We cannot comment on proposers or their confidential proposals prior to the award of a contract.” Vikings spokesman Jeff Anderson said it’s the team’s policy to withhold commenting on bids until after a contract selection has been made.

Other politicians are also distancing themselves from the MSFA’s deliberations, including the stadium’s biggest champion, DFL Gov. Mark Dayton. “The purpose of the state’s competitive bidding process is to remove politics from contract decisions,” Dayton’s Deputy Chief of Staff Bob Hume said in a statement. “The governor believes it is important to respect the integrity of that bid process.”

For Minneapolis Mayor Betsy Hodges, Anschutz’s views are “unacceptable,” but she noted that the state’s laws will protect LGBT rights in the state no matter who ultimately wins the bid. “Fortunately, if AEG is selected as the stadium operator, it will have to abide by our laws, which, in Minneapolis and Minnesota, include some of the strongest protections in the country for LGBT people and working families,” she said.

How Chris Kluwe, gay marriage and a reclusive billionaire could affect who runs the Vikings stadium