These days, DFL Rep. Phyllis Kahn is telling other Democrats she needs help.

On paper, Kahn, 77, is a shoo-in to be re-elected to represent the same left-leaning Minneapolis House District she’s represented for the last 42 years. For a lot of Democrats, it doesn’t make sense why Kahn — who won her last race with more than 77 percent of the vote — would need extra help this time, whether with donations or boots on the ground.

“I tell them, ‘That’s what Eric Cantor said,’ ” Kahn said. Like Cantor, the former U.S. House majority leader who lost in a primary earlier this year, Kahn is facing a challenge from inside her own party — DFL Somali activist and Minneapolis School Board member Mohamud Noor.

It’s not Kahn’s first primary challenge in her four decades in the House, but it’s certainly her toughest in recent memory. Noor’s ability to energize and organize the district’s Somali community has Kahn’s supporters worried, especially in a low-turnout primary election. And the race has been contentious from the beginning. In February, a precinct caucus meeting in the Cedar Riverside neighborhood broke out in in violence over the race. And in April, Noor successfully blocked Kahn from getting the DFL endorsement.

“[Noor] has a base in the Somali community, and that helps him a great deal,” said longtime DFL activist and former Hennepin County Board Chair John Derus, who is supporting Noor. “But Phyllis is a wise politician, and people have counted her out before.”

But House District 60B is different. Unlike Ward 6, its boundaries stretch far beyond Somali communities, and include areas like Nicollet Island, Prospect Park, Marcy Holmes and the University of Minnesota.

Noor, 36, is a relative newcomer to politics, and he knows he needs to make his name known with all the major constituencies in the district — Somali Americans, students and seniors. That’s what he was doing on a hot summer day in July, knocking on doors in the Seward neighborhood of Minneapolis. 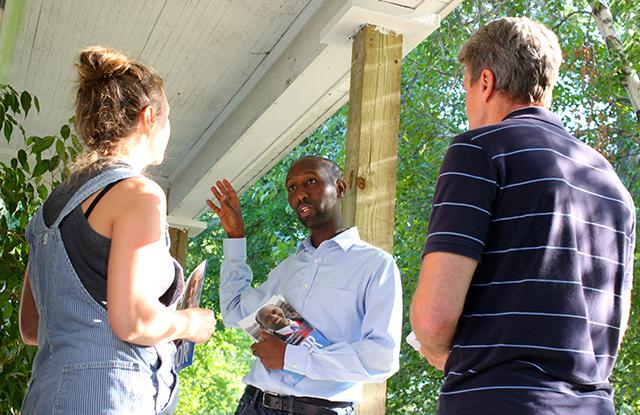 Few people recognized Noor when he greeted voters at the doors, though he did have help from a more familiar face — former mayor R.T. Rybak. “You’re the bike-riding mayor!” one man said they approached him on the street, which gave Rybak a window to launch into his pitch for Noor. “He has a very unique ability to listen and then act,” Rybak said, handing the man a flyer. “This is a big and complex district, and Mohamud can tie all those pieces together.”

Noor needed the help. He was near the end of a month of fasting as part of Ramadan, and he hadn’t been sleeping much, either. Noor has made education a centerpiece of his campaign, and as he greeted people at their front doors, he talked mostly about the importance of early education and right-sizing classrooms, an issue he said has been “mostly ignored in the district.”

One resident noted that Kahn was “visually powerful” in the neighborhood, but quietly listened to his pitch. “I’m glad you stopped by,” she said after Noor finished. “I would have voted for Phyllis otherwise.”

As of Thursday, 1,285 absentee votes had been accepted — but not counted — so far, according to Hennepin County election officials.  There are about 22,000 registered voters in the district, though both campaigns predict only about 3,000 people will show up to vote in a summer primary. If that’s true, that means nearly half of the ballots have already been cast in the race, and the Noor campaign believes most of those are for him.

But Kahn’s campaign has been pushing early voting as well, largely thanks to the help of Warsame’s organizing force. His support for Kahn — who backed him in his City Council bid — has fractured the Minneapolis’ Somali Community and siphoned off support from Noor.

Early voting sparked a brief controversy in the race last month, when Kahn attorney Brian Rice accused the Noor campaign of having a hand in improperly registering more than 100 voters at a single mailbox address in Cedar Riverside. Hennepin County elections officials said there was no sign of organized election fraud, but they ordered the residents to re-register at their proper address.

The incident spooked many Somali voters in the district, who were afraid they would be accused of trying to illegally vote, activists said. But anger from Democrats over Rice’s knee-jerk allegations of voter fraud has also given a boost to the Noor campaign, said campaign spokesman Benjamin Fribley, and more Democrats have been working quietly behind the scenes for Noor since the complaint.

“I think the way her campaign handled it lent some credibility to our campaign,” he said. “It’s galvanized progressives.” In another complaint in the race, the state Supreme Court sided with Kahn’s campaign, which alleged a Minneapolis election judge supported Noor and asked early voters if they wanted to cast their ballot for “our Somali brother” or the “old Jewish lady.”

Yet the DFL Party’s Somali American Caucus has yet to endorse in the race. Abdikadir Hassan, chair of the group, said the divisions in both the party and Somali community has made it awkward to give the group’s blessing to either candidate. “It is an important race in the community as a whole, and it feels good to have the spotlight on how we can better represent the Somali community,” he said.

At her home on Nicollet Island, Kahn was busy making sure no one can compare her to Cantor, a powerful politician who lost touch with his district.

She fed campaign volunteers grapes — not expensive steak dinners, like Cantor — and offered them coffee and water before they headed out to knock on doors. When they got back, they could crack open a bottle of Rosé, Kahn offered, or take some eggs home from the two-dozen chickens she has in her backyard.

Several volunteers were former or current students at the University of Minnesota, where Kahn has always enjoyed a lot of support. But few expect the empty summer dormitories to produce many voters in the primary, which has made door knocking in other parts of the district critical. A few Democrats came out to help get out the vote, including Hennepin County Commissioner Linda Higgins and fellow DFL Rep. Frank Hornstein.

Volunteers picked up old red campaign signs worn from previous races and put blue tape over the words “DFL-endorsed” — so they could keep using them. Kahn has raised more than $38,000 for the race, but has also spent most of it, and has personally loaned her campaign $4,500.

Kahn hit the doors too, and the first person she talked to in the Seward neighborhood recognized that she had been a scientist by trade — Kahn earned her bachelor’s degree in biophysics at Cornell and her doctorate at Yale. That’s one of Kahn’s main pitches for herself — not a lot of people work on science issues in state legislatures anymore.

“I’m one of the few people in the Legislature here with a science background,” Kahn told the voter. “People often ask me if I miss science, but I say no, I can’t sit still for that long anymore.”

Science is what got Kahn into politics in the first place. She was studying DNA samples at the University of Minnesota in the early 1970s when the dean told her her research contract had been cut off. She was in the middle of a discrimination lawsuit against the university for not putting her on the same track for tenure as her male colleagues when she decided to run for a seat in the Minnesota House of Representatives.

She won. And in the years since, Kahn has established a reputation in the Legislature for taking positions not advocated by many others. She was the chief author of one of the first indoor smoking bans enacted anywhere in the world, and she has repeatedly pushed for repeal of the Sunday liquor sales ban.

“She’s been for progressive changes and real progressive policies long before they were popular — that’s my definition of leadership and that’s what I want in a legislator,” said Peter McLauglin, a Hennepin County commissioner and supporter of Kahn. “Whenever there’s a challenge you gotta pay attention, and she’s paying attention. She’s out there and working hard. She’s not taking this seat for granted.”