Seven years ago, 12 Somali friends from the Twin Cities came together to talk — to have a conversation about how to save some of their troubled peers from falling into a sea of radicalization and gang violence.

Eventually, that conversation gave way to an art initiative, one in which members of the group engaged its Somali community through spoken-word performances, poetry and music.

Through this artwork, the group explored one of the most sensitive issues within the Somali community: the radicalization of youth.

The courage to tackle such a topic gave the group a household name among the sizable Somali-American community in the Twin Cities. It also gave the group a reason to turn a one-off initiative into something bigger.

The group eventually became Ka Joog, now an award-winning nonprofit organization that services immigrant youngsters in the Twin Cities through educational programs and art activities. Today, Ka Joog is one of just a few community organizations aimed at combating one of the most vexing — and highly scrutinized — problems in the Twin Cities: the radicalization and recruitment of Muslim youth to join terrorist organizations oversees.

“How we solve this radicalization is really to play a preventive role,” said Ka Joog Executive Director Mohamed Farah. “We’re trying to engage young people well before Al-Shabab or ISIS engages them. We’re tying to engage them at a young age. We’re trying to provide them better opportunities.”

The recent reports about the deaths of two Muslim men with ties to the Twin Cities, Douglas McCain and Abdirahman Muhumed — the first Americans to die fighting for the Islamic State group — have reminded Farah of the challenges Ka Joog faces. (Muhumed was a member of the Minneapolis Somali community, and McCain was an African-American who attended Robbinsdale Cooper High School in New Hope and converted to Islam 10 years ago. )

The one thing that is new this year, though: Women traveling to aid and marry fighters of terrorist groups. Rumors in the Minneapolis Somali community have it that at least two Somali women have gone to Syria. And as the Star Tribune first reported, a 19-year-old Somali woman from St. Paul is suspected of joining ISIS in Syria. And in Britain, twin Somali teenage sisters, Salma and Zahra Halane, have reportedly gone to Syria, following their elder brother, who’s believed to be an ISIS fighter.

Individuals who are drawn to extremism have common traits that make them prone to radicalization, Farah noted. “They’re unemployed. They feel isolated. They’re at a low point of life.”

“They are looking for a higher purpose,” Farah continued. “When you’re at a very low point of your life, religion becomes very important. And so these radical groups are using religion to justify their actions. And when you don’t know enough about your own religion, this is where you can easily be influenced.”

Farah, a former refugee from Somalia, spent most of his life in New York and Minneapolis. As a teenager, Farah watched many of his friends become radicalized. “As I was growing up, I saw a lot of young men who had the potential to be the next Barack Obama,” he said. “But may have gone the wrong path for no reason because they’re trying to fit in.”

Ka Joog tries to embrace those kids, and engage them through its various platforms, including a Summer Camp, a 4-H Club and its Invisible Arts program.

The Ka Joog Summer Camp program, which it operates in partnership with the Boy Scouts of America, recruits about 30 teenagers from the Twin Cities for a two-week experience of camping each year. As the teens camp, they participate in swimming, canoeing, fire making and tent building while learning the importance of collaboration and leadership.

Ka Joog also organizes camping activities for schoolgirls, who — for cultural reasons — are sometimes limited from experiencing life outside home.  “We had girls go to the Yellowstone National Park for a week for the first time in the Somali community,” said Abdimalik Mohamed, Ka Joog program director. “We have these new innovative ways to serve the community because integration plays a big role in Ka Joog.” 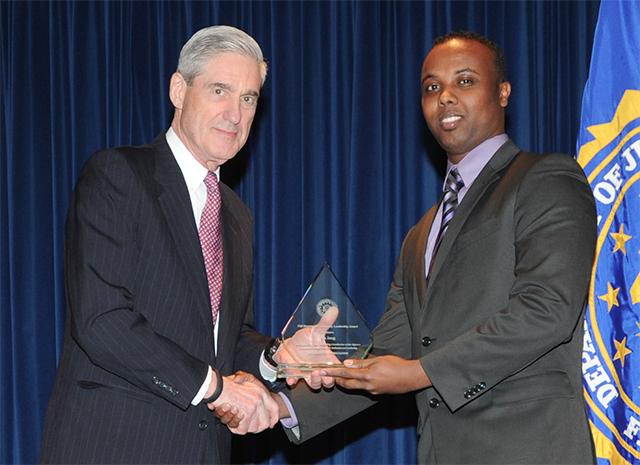 Trips like these prepare young people for a future in which the ability to adjust and thrive in a new environment is essential, Mohamed said.

Farah added: “We’re teaching that now, at a younger age. Later, we don’t have to worry about them being recruited to radicalization.”

Ka Joog has also partnered with the University of Minnesota and 4-H, the federally administered youth development program with 6 million participants throughout the country. The club engages its members in hands-on learning activities in science, technology, engineering and math.

“The idea is, by the time these young people graduate from high school, we want them to go into STEM [Science, Technology, Engineering and Math]-related fields,” Mohamed said. “At a young age, we want them to think about college.”

And through its Invisible Art program, Ka Joog aims to create space for youth to express themselves through poetry, music and storytelling. “Education and art go hand in hand,” Farah said. “So we’re using art to empower individuals, but also we’re using art to teach about the elements of the Somali culture.”

Unlike other organizations in the community led by older generation, Ka Joog is uniquely positioned to serve the community’s most vulnerable youngsters. Its staff members grew up in the Twin Cities, and they encountered similar obstacles many young people now face.

“We’re not just passionately connected,” Farah said, “but we’re emotionally connected to what we do.”

How one Twin Cities group is fighting radicalization of Muslim youths