Recent revelations that several people with local ties have been connected to terrorist organizations in the Middle East has caused the Twin Cities Muslim community to question how to best to stop Minnesotans from joining these radical groups.

Some local Muslim leaders have been advocating a concerted public effort as a way to counter recruitment by terror organizations such as the Islamic State in Iraq and Syria. Others, however, worry that a public approach would only bring unwanted attention at a time when many are afraid of bigotry toward local Muslims — and say a private approach is most effective, one they argue is already taking place within mosques, community centers and families throughout the Twin Cities.

The difference of opinion over addressing those most vulnerable to messages from foreign radical Islamic groups is being played out against a backdrop of already increased tensions, as the state’s Muslim population continues to grapple with the revelations that several people with ties to the Twin Cities have been involved with radical groups overseas.

Last month, Douglas McAuthur McCain, 33, who attended high school in Robbinsdale, died while fighting for the Islamic State in Syria, where another Minnesota man, Abdirahmaan Muhumed, 29, also died. Also last month, a 19-year-old woman from St. Paul used a borrowed passport to leave the United States and travel to help terrorists in Syria, the woman’s family told the Star Tribune.

“Muslim people need to get together and stop kids going over to ISIS to kill people,” Kiin Yusuf, a 34-year-old Muslim woman from Minneapolis, said during break from working at Kismayo Fashion, a woman’s clothing shop at the Village Market. “Or we need to find the people who got to those kids and paid for them to fly. I believe this was not their idea.” 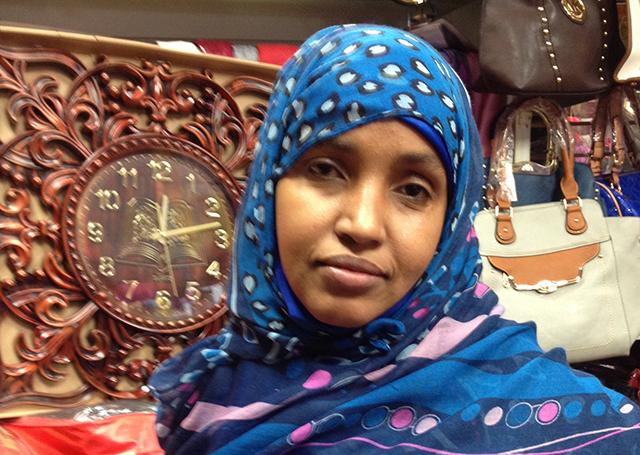 MinnPost photo by Mike Cronin
Kiin Yusuf: “Muslim people need to get together and stop kids going over to ISIS to kill people.”

During a June visit to Minnesota, FBI director James Comey estimated about 100 Americans have left the country to fight in Syria so far. Of those, the bureau estimates that six to 12 Twin Cities residents are currently fighting with Islamic State or other groups overseas, said Special Agent Gregory Boosalis, a spokesman for the FBI’s Minneapolis office.

U.S. law-enforcement officials have little power to stop them from doing so. When it comes to traveling to the Middle East, for example, it’s easy for potential recruits to say they’re traveling to, say, Turkey on vacation, said James Lewis, director and senior fellow of the strategic technologies program at the Center for Strategic and International Studies.

ISIS appeals to ‘something larger than oneself’

With promises of joining the jihad and fighting for something larger than oneself, ISIS has created a lethally effective recruitment narrative, said Cawo Abdi, an assistant professor of sociology at the University of Minnesota who studies Islam. “Recruiters on the Internet are glamorizing the war itself, framing it as a battle against The West,” she said. “But there’s little information about the victims. These so-called jihadists are massacring countless innocent Muslims.”

Yet Twin Cities Muslim leaders have so far been reluctant to respond with a conspicuous counter-narrative. “There hasn’t been one event that I am aware of,” Abdi said. “I’m not seeing anyone do anything like some type of gathering for youth. Or some type of sports tournament and using that as a forum. It’s not being done by our community leaders.”

Salih Radih, 59, a Maple Grove resident and former president of the Imam Hussain Islamic Center in Brooklyn Center, would welcome such a gathering. “I wish people would do that,” said Radih, an ethnic Iraqi who has lived in the Twin Cities for 35 years. “All of the imams of the area could get together … and voice their opinions on issues. … It’s very much needed.”

For all of those open to the idea of a public effort, though, there are many others who remain wary of such an approach. Rather than solidifying Muslim-community connections by bringing the marginalized into the fold, that kind of high-profile approach could serve simply to shine a brighter spotlight on American citizens who have done nothing wrong, some Muslim leaders worry. “They’re going to feel they’re already under a microscope because they’re Muslim,” said Rep. Keith Ellison, D-Minnesota, whose district includes a large number of Muslims and is the first Muslim elected to Congress.

Indeed, Minnesota Muslims don’t want their fellow Americans to begin fearing them. Nor do they local law-enforcement to begin surveilling them without cause, said Makram El-Amin, imam of Masjid An-Nur mosque in North Minneapolis.  “When things are taking place internationally, the repercussions are felt locally,” El-Amin said. “People are harassed more and watched or followed more. That, in itself, draws a reaction. People become paranoid.”

Besides, argue some local Muslim leaders, influential members of the community have long been discussing the differences between the pillars of Islam and the killing perpetrated by groups like the Islamic State in the name of Islam. “After Ramadan [this summer], we had a Muslim basketball tournament,” El-Amin said. “Throughout the weekend, we had authentic messages of Islam in a direct effort to bring unity in Minnesota and dissuade anyone from being distracted by messages that are not authentic. This is prior to the whole ISIS situation. This kind of activity takes place anyways.”

El-Amin said Masjid An-Nur also hosts new Muslim orientation classes and other workshops that offer certificates of completion so Muslims can interact with other Muslims. “We’re very adamant and clear in our messaging,” he said.

That’s one of the reasons he and other Twin Cities Muslim leaders maintain close relationships with federal officials, including the FBI and the U.S. Department of Homeland Security. In fact, officials at the White House, the Department of Homeland Security, the FBI and the local U.S. Attorney’s office told MinnPost that they’re working work with the Twin Cities Muslim community to deter recruitment by Islamic radicals.

Boosalis, of the Minneapolis FBI, said that last year, the agency reemphasized the outreach program it put into place during 2007-08 to combat the “first wave of individuals traveling to Somalia” to join al-Shabab, the al-Qaeda affiliate terror group there. The reemphasis focused on those potentially going to Syria, he said. “We educate parents what their children possibly may be faced with,” Boosalis said.

In the end, though, the most effect anti-recruitment efforts is cultivating a sense of optimism among Muslim-Amercan youths, said Sadik Warfa, deputy director of the Minneapolis-based Global Somali Diaspora. “I say, millions of people want to come to this place, want the opportunity they have,” he said. “I tell them to take the opportunity of this country. Work hard. Study hard. And your efforts will be rewarded. No other place on Earth gives you that chance.”

Warfa said it also is important to remember that only a tiny number of people have left Minnesota to fight with radical Islamic terror groups overseas. “We’re Americans,” he said. “We may have an accent, but this is something I hope most Minnesotans understand: We love this country like they do.”