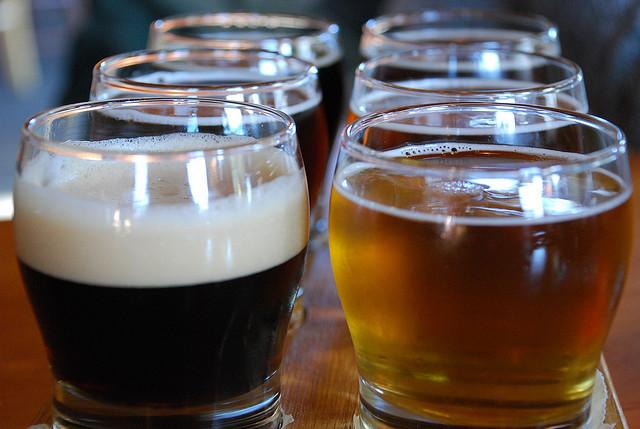 CC/Flickr/Adam Fagen
One factor driving the rule change was the relatively high cost of craft beer.

The Minneapolis City Council Friday began what they hope voters will finish in November — the modernization some of the regulations that control the ill-effects of alcohol use in and around the city’s restaurants.

The vote was unanimous and came in the midst of a busy meeting that also saw the council approve the purchase of police body cameras for a test this fall, approve a new deal with Ryan Companies for development of a site near the new Vikings Stadium and even encouraged restaurants to provide single-use, non-gender-specific restrooms.

The new alcohol regulations will replace what many council members — as well as restaurateurs — consider outdated means of keeping a lid on over-drinking and over-service. The current rules use revenue ratios that differ depending on where the restaurant is in the city.

In essence, the nearer a restaurant is to residences, the less alcohol it can serve: no restrictions downtown, a 60/40 food-to-alcohol ratio in larger commercial districts and a 70/30 ratio in smaller commercial areas. The 70/30 restaurants — about 70 establishments citywide — can only serve beer and wine.

Restaurant owners have complained that with pricier craft beer and expensive wine it is hard to stay within the ratios. Often two craft beers are more expensive than a meal, they have said.

The new rules use other methods to make sure restaurants look and act like restaurants — full-service food menus, limits on the size of bar and requirements that they control noise and over-drinking. Restaurants will still be required to earn a “substantial” amount of their revenue from food sales. The city will be able to act against restaurants that don’t meet these requirements.

Further complicating what is already an overly complicated situation, the council action gets rid of the ratios in the so-called 60/40 restaurants but not those in the 70/30 areas. Only voters can get rid of the 70/30 ratio because it is contained in the city charter. That decision will appear on the November ballot as Question No. 2.

Council Member Elizabeth Glidden said it was important to have new rules in place so voters know what would replace the old ratios when they vote.

“The community wants to know that a, we’re supporting our business community but also we have a proper way of regulating those businesses and that those businesses are being good neighbors,” Glidden said. She co-sponsored the new rules with Linea Palmisano and Jacob Frey.

For Council Member Andrew Johnson, it was also about jobs since the new rules don’t discourage sales of craft beers, many of which are produced by craft brewers in the Twin Cities and around Minnesota.

While all council members attending were in support (Abdi Warsame was absent due to family-related matters), one said some residents in his district remain concerned.

“I will say people are nervous about this change,” said Cam Gordon who has neighborhoods near the University of Minnesota in his districts. “There were people who, I think unrealistically, thought the ratios brought some reassurances and some protections about over-serving, serving minors, turning a restaurant into a bar.”

But Gordon said he thinks the new regulations make more sense and he challenged restaurant owners and regulators to prove that they will work.