“Every large public works project clearly picks winners and losers, and your constituents are the losers,” Minneapolis City Council Member Lisa Goodman said she was told by a DFL elected official. “Good thing they can afford it.”

The remark was a reference to the relative affluence of the most vocal opponents of the Southwest Light Rail Transit route that was given final approval Friday by the Council — an alignment that cuts through the Kenilworth Corridor between Cedar Lake and Lake of the Isles as part of its 16-mile route.

Among the things those affluent constituents can afford, however, are lawyers. And a decision is expected soon on whether to challenge the approval in court. “We are all looking forward to a lawsuit,” said Mary Pattock, a leader of the group LRT Done Right. “We have the law on our side.”

Tom Johnson, an attorney with Gray Plant Mooty who’s also a former Hennepin County Attorney and Minneapolis City Council member, is representing opponents of the current plan. He said most of the discussion among his clients has been over whether it was permissible for the council to give municipal consent to the route before it had seen the results of a draft supplemental environmental impact statement. “They think the planning and decision-making is getting ahead of the environmental review,” said Johnson, who said he expects a decision this week on whether to file suit against the city.

The council members were clearly leery of a lawsuit while debating the issue last week. At an August 27 meeting, Council Member Blong Yang asked the city’s attorney whether the council was on sound legal grounds to approve before seeing the EIS. “The one thing that we do know is there is a deadline for this council to vote on the issue of municipal consent,” said City Attorney Susan Segal. “Whether or not environmental review is required prior to consent is an issue that may well ultimately be resolved by the courts.”

The Southwest Project Office, the entity created by the Metropolitan Council to manage the expansion, was less equivocal about the legal issues. In a statement released immediately after the Friday vote, it said the state legislation authorizing the project recognized that municipal consent to the preliminary design plans and the environmental review would run simultaneously.

“The Legislature did not require or expect the environmental review to be complete before municipal consent,” the statement said. Once the EIS is published, probably in January, “anyone, including cities and the public, will have an opportunity to comment on the SDEIS.”

If substantial changes need to be made to the design of the project, the Met Council would have to seek further municipal consent, the statement said. And Council Members took action to put the Metropolitan Council — the entity in charge of the expansion project — on notice that its consent could be undone by an EIS that reveals new threats.

“We made a very clear statement that we will stop this train if it threatens our city’s, our region’s, environmental resources,” Council Member Lisa Bender said Friday before joining with the majority to approve the measure 10-3.

The draft supplement review, needed to look into issues raised by the addition of a shallow tunnel through the narrowest part of the Kenilworth Corridor (as well as other issues), has been completed and is being reviewed by Federal Transit Administration officials in Washington, D.C.

The fact the draft EIS is finished but is unavailable to the city until January rankled Council Member Cam Gordon. “What’s really strange is, it’s been drafted,” Gordon said. “There’s a bunch of information in some document somewhere and it’s been sent far away to some other governmental body. How’s that for working together and being good partners. … The federal government is holding that information and won’t even let us see the draft.”

Another next step involves the issue of equity — specifically, using the expansion project to assure that the transit system serves communities with high numbers of people of color. To do so, the Equity Commitments Coalition has asked the Met Council, Hennepin County and the city of Minneapolis to commit to specific improvements and enhancements.

Those enhancements include creating better connections between North Minneapolis and the nearest planned stations, at Van White and Penn, so that the expanded line can be more useful to residents there. The coalition also wants more money spent on transit programs such as covered and heated bus stops, and better bus service.

And the coalition wants specific targets for hiring people of color to help build the line. 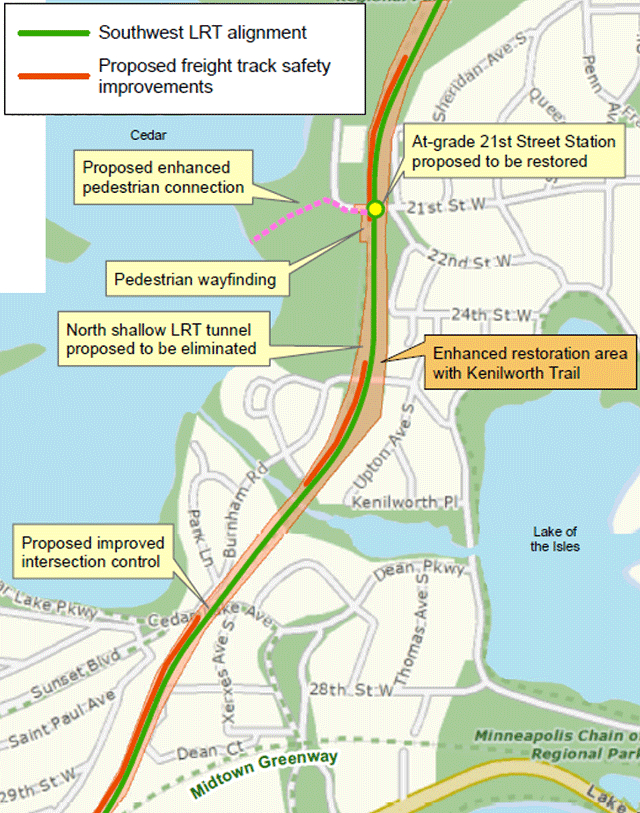 The Met Council has formally responded to the requests, and coalition members want to get a similar response from the city, and then make sure commitments are kept, said coalition member Aasim Shabazz. And they would like specific timelines, “because it let’s people know when they can get involved,” he said.

The City Council directed staff to convene appropriate departments to draft a response and report back to the Transportation and Public Works Committee by Sept. 9. Council Member Kevin Reich said by adopting formal staff directions, that issue “goes to the top of their work list.”

Yet Council Member Alondra Cano said she has met with residents who don’t think the city is taking equity issues seriously. “They think we’re just talking about it: talk, talk, talking was the meme they shared with me,” Cano said. “They want to see how this language is being mirrored in concrete investments in their communities.”

Minneapolis was the final city on the alignment to give consent, following Eden Prairie, St. Louis Park, Hopkins and Minnetonka. Hennepin County has also given its consent. With those in hand, the Southwest Project Office can move further along in the design process. The request for proposals for the advanced design contract should be awarded early next year.

Advance engineering will also begin next year, which is also when the project will submit its application for funding through the Federal Transit Administration’s New Starts program.

An agreement with the FTA to cover 50 percent of the project costs (which inexplicably, is called a “Full Funding Grant”) is expected by 2016, which is also the year construction is set to begin. The service is planned to open in 2019.

All that, of course, is dependent on what happens with the EIS and any litigation that might be initiated.

Minneapolis has OK’d Southwest LRT. So what happens now?