It’s known by a name that only a bureaucrat could love: Section 4(f).

Yet it could be the centerpiece of a legal challenge to the approved alignment of Southwest Light Rail Transit.

Known as Section 4 (f) for its original placement in federal transportation laws, the rule requires that transportation projects using federal money not take or adversely affect parks or historic sites. Under the  regulations, only if a route is the only “feasible or prudent” pathway for the project can the federal government approve it. And that would come only after steps are taken to reduce and mitigate the ill effects on parks and historic sites.

It is yet another potential headache for planners and policy makers trying to complete the Green Line light rail extension to Eden Prairie by 2019.

Park and Rec Board says concerns have been ‘neglected’

Wednesday, the Minneapolis Park and Recreation Board will vote on a resolution to hire a law firm to review its “rights and responsibilities under State and Federal law to uphold its mission to protect and preserve parkland for current and future generations.”

The $22,000 contract with Stinson Leonard Street asks the firm to look into a legal response to the route, especially where it impacts parks. While the park board was not given a formal role by state legislation creating the process to choose a route for the Southwest Light Rail Transit project, federal law does.

The board’s main worry is that the SWLRT route will damage the trail that runs through the Kenilworth Corridor, and the water channel beneath the path that connects Cedar Lake and the Lake of the Isles. “The board has real concerns,” said parks Superintendent Jayne Miller. “We have, in a proactive and non-confrontational way, worked with Hennepin and the Met Council. But the board is concerned that those concerns have not been addressed and in many ways have been neglected.”

Sue Haigh, chair of the Met Council, said two weeks ago that the council “continues to work with interested parties as we move to final engineering and design. We’ll listen to the park board on their concerns.”

And Haigh said the council will respond to any issues raised by the supplemental EIS. “The whole purpose is to identify environmental impacts that can be mitigated,” Haigh said. “The impact on the environment is incredibly important to us as an organization.”

Met Council says impact on parkland will be ‘minor’

The Metropolitan Council’s 2012 environmental review of the $1.64 billion, 16-mile expansion acknowledges that the alignment chosen could have multiple Section 4(f) implications. It also says that the impacts would be minor and could be mitigated.

The park board isn’t so sure. The selected route is along an existing rail right of way that includes a section of the Kenilworth Corridor. Now used for bike and pedestrian paths, the trail would ultimately share the space with light rail and — in this key section — freight trains.

Disrupting the trail itself does not trigger Section 4 (f), the 2012 EIS states. But the spot where the trail and tracks cross over the channel between Cedar Lake and Lake of the Isles is different. It is not only clearly parkland but it is historic as part of the Grand Rounds National Scenic Byway, which has been nominated for placement on the National Register of Historic Places — all of which potentially trigger both the park protection and historic site protections of Section 4(f). Its nomination the National Register also brings in protections under federal historic preservation laws.

The EIS states that the existing timber bridges over the channel are considered “non-contributing” elements of the Grand Rounds; removing them would not raise historic protection issues. (The EIS did say the replacement bridges could be considered adverse impacts on the channel if they weren’t designed to meet federal preservation standards.)

The Park Board doesn’t believe new bridges over the Kenilworth Channel are the answer, no matter how well they are designed. They believe the increased rail traffic that will pass over such bridges are disruptive to the use of the channel by canoeists and kayakers. In a resolution passed on May 21, the board refers to the planned bridges as “massive at-grade infrastructure on critical parkland.”

Parks superintendent Miller said the proposed bridges include large approaches on both sides and will be more than double the width of the current bridge. “It’s not just the trains but the visual impact,” she said. “The park experience will change in a dramatic way.”

The board resolution from May stated that there are, in fact, “feasible and prudent” alternatives to routing light rail trains through the Kenilworth Corridor, and that the only way to use the route without causing harm to the channel is to tunnel beneath it. Yet a so-called deep LRT tunnel would add between $170 million and $180 million to the project costs.

In the resolution, the board “states its determination that the project as currently proposed to bridge LRT over the Kenilworth Channel is likely not the most feasible and prudent alternative and therefore the Minneapolis Park & Recreation Board will not grant project consent under Section 4(f) … until greater analysis occurs and project plans are modified.” 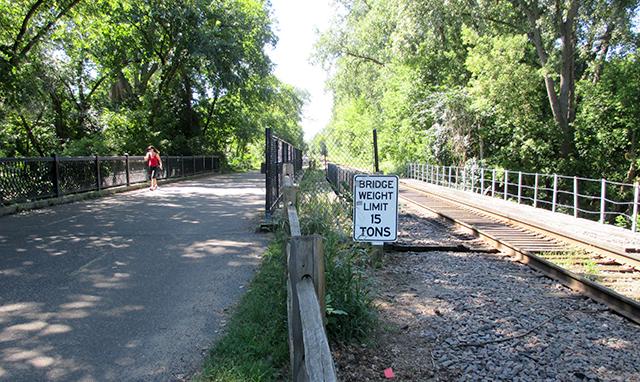 MinnPost photo by Peter Callaghan
Negative impacts of increased train traffic and large new bridges over the Kenilworth Channel has the Minneapolis park board considering legal challenges to the alignment.

While there have been conversations between parks and the Met Council staff and between parks and the city of Minneapolis, the basic alignment remains the same. The only change regarding the corridor is the elimination of one of two shallow tunnels that were to carry light rail trains north and south of the channel. The north tunnel was removed from the plan and trains will now go underground in an especially narrow section south of the channel where the right of way is not wide enough to accommodate freight rail, light rail and the bike-pedestrian path.

The May 21 resolution was only the latest in a series of statements made by the park board — first in December 2012 and again last summer — that opposed the shallow tunnels and bridge plan. Last February, the park board called on the Met Council to conduct detailed engineering on the feasibility and cost of a deep tunnel.

This week’s proposed resolution offers a reminder to the Met Council of the park board’s longstanding concern over the impacts to the trail and the channel.

“Since 2012, the MPRB has consistently and regularly communicated, through public Board actions, its concerns and position regarding the Southwest Light Rail Transit options,” the proposed resolution states.

What will the park board do? That has been one of the major unanswered questions as the Met Council moves toward getting final funding for the project. The proposed resolution strongly suggests that the board will challenge the alignment and lack of a deep tunnel beneath the channel. The board could refuse to consent to the route.

The agreement with the law firm hired by the park board says the $22,000 will cover legal research and opinions regarding the board’s rights under Section 4 (f) and other environmental laws, but it does not cover negotiations with other parties or actual litigation. Should the board decide to pursue litigation, “the scope of work, budget and fees and expenses will be re-negotiated to reflect the increased scope of work.”

Anita Tabb, the park commissioner whose district contains the Kenilworth Corridor, said the board and staff are talking about how the board will respond to the approval of the alignment by Hennepin County and the five cities it will pass through. The board is also waiting to hear back formally from the Met Council but remains committed to protecting the parks and lakes. “The reason people tend to love Minneapolis is because of the parks and natural spaces,” Tabb said. “It’s what draws people to the city.”

Section 4(f) dates to 1966 and came in response to a Texas plan to route a highway through the Brackenridge-Olmos Basin Parklands. Later, in upholding the law, U.S. Supreme Court Justice Thurgood Marshall wrote that the section “is a plain and explicit bar to the use of federal funds for construction of highways through parks — only the most unusual circumstances are exempted.”

If the impacts are minor — “de minimis” in the rules — the federal government can approve a project.  According to the EIS, a “de minimis” impact on parks and recreation areas  “is one that will not adversely affect the features, attributes, or activities qualifying the property for protection under Section 4(f).”

The EIS states that the effects in the Cedar Lake and Lake of Isles vicinity can be reduced through mitigation efforts and “it is likely that these impacts would be found to be de minimis if these impacts cannot be avoided entirely.”