In late August, Spencer Cronk took over as city coordinator for the city of Minneapolis.

Nominated by Mayor Betsy Hodges and confirmed by the City Council, Cronk reports to both the council and mayor and serves in a job that is unique to Minneapolis.

The 34-year-old Cronk grew up in Hopkins and attended the University of Wisconsin, receiving a bachelor of science degree in International Agriculture and Natural Resources. He later was a fellow in public affairs at the Coro New York Leadership Center and completed the senior executives in state and local government program at the Kennedy School of Government at Harvard.

Before coming to the city, Cronk worked as the commissioner of the Department of Administration under Gov. Mark Dayton. Before that, he was executive director of organizational development for New York Mayor Michael Bloomberg’s Department of Small Business Services.

Cronk recently sat down with MinnPost for a conversation about his new position.

MinnPost: Not that anyone actually speaks to anyone in elevators, but if you did, what would your “elevator speech” be to explain yourself?

Spencer Cronk: I would say I’m a small-town boy who loves Minneapolis. I grew up here, in the suburbs — Hopkins — and went to Madison for college and then did some work in California and New York City. I cut my teeth in city government in New York. I then spent the last four years working for Gov. Dayton as the Commissioner of Administration.

MP: What exactly is the city coordinator?

SC: When I first started this job, I learned about how the policy makers and founders of the city were intentional about dispersing the power and authority across different levels of government. You have an independent park board, you have an independent school system. Even within the mayor and the City Council’s relationship, their ability to bring on department heads is separate from what might be typically a city manager position. [Brings out an organizational chart] It is very fascinating to look at how there’s not too much authority in any one person in the city of Minneapolis. But they were intentional about that word “coordinator” because they really wanted to allow somebody to work with the different city department heads — police, health, civil rights — to coordinate their efforts.

MP: Who is your boss? The Mayor? The Council? The executive committee? All three?

SC: All three. Yes. I would say the executive committee (made up of the mayor, the council president and three additional council members) but the mayor makes the nomination and then it gets approved by the council. 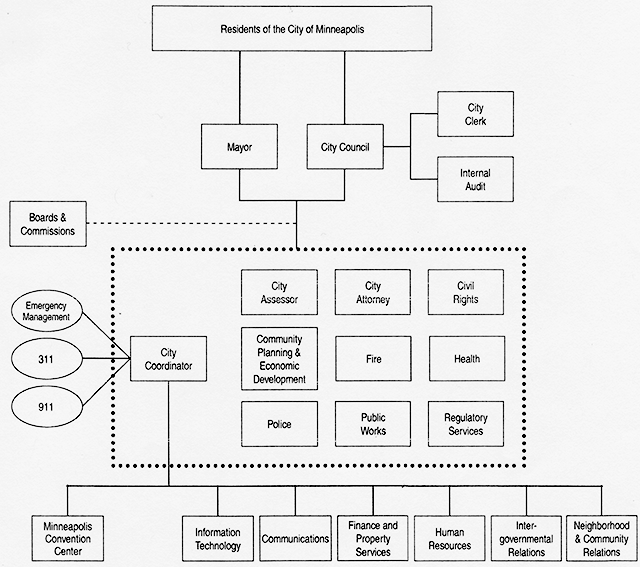 City of Minneapolis
Minneapolis’s complex city government which disperses power and authority into many different hands can be hard to explain — even with an organizational chart.

SC: It’s actually just for two years. All department heads are on a two-year cycle and then are up for renewal.

MP: Your previous job as commissioner of the state Department of Administration put you in the middle of the state Capitol renovation project. What was the biggest challenge in that role?

SC: The first challenge was educating new lawmakers on the history of the project. This is something that has been talked about for 30 years and nothing’s been done about it. So it was really about talking to individual legislators and the general public about the need for the restoration effort. If we weren’t going to do something now, the building was going to be in a perpetual state of disrepair. … There was a commission established that was chaired by the governor and included representation from Democrats and Republicans, the historical society, all the major stakeholders. At that point the hardest thing was to keep everyone’s eyes on the prize of doing a comprehensive restoration effort. With any large project like this — and this was the biggest preservation project that the state has ever undertaken — there’s always going to be competing priorities, particularly with bond funds. I would say the biggest challenge was to recommit everyone to saying “yes, it’s going to take a chunk of the bonding bill but it’s critical that we do this in the life-cycle of the Capitol and that we do a comprehensive effort that will restore it for the next 100 years.”

MP: As with city coordinator, the Capitol renovation has many leaders. How did you manage that and was it good practice for this job?

SC: Absolutely. The general question is who owns the Capitol. No one can specifically answer that because it’s owned by the people of Minnesota, but there are a lot of different stakeholders that are invested in what will happen with that building — whether it’s the governor’s office or the attorney general’s office, the House, the Senate. The building still has to function to allow us to effectively govern. A lot of the skills I developed in the process as far as relationship management translate directly to this job because so much about it is understanding the council’s priorities, understanding the mayor’s priorities and then really working with all the department heads’ staff  at the city to achieve those priorities. Because it’s a coordinative role — and not an authoritative role — I have to work effectively with these department heads to keep everyone on the same train.

MP: It sounds like a difficult, if not impossible job, subject to the whims and political fortunes of not one politician but 14 politicians. What made you want to take the job?

SC: Couple of things. One, I have a passion for local government. … We have an incredibly civic-minded and engaged citizenry. I personally have a passion for Minneapolis. It’s an incredible city. It’s on the verge of becoming a world-class city and I really want to be a part of this movement that is seeing this movement to fruition. I also have a personal alignment with the mayor’s and the council’s goals of making the city run well. But it’s not just that it needs to run well. It needs to run well for everyone. It gets to the equity conversation. The city needs to be thinking about how all of its programs — city services — are impacting residents in the most-effective ways but that we are addressing the stark disparities that the city has.

MP: You were appointed by Mayor Hodges. How did you come to know her?

SC: It’s interesting because both of the executives that I’ve worked for — Gov. Dayton and Mayor Hodges — I didn’t have long histories with. I moved here from New York and didn’t know the governor before I got the appointment to be commissioner of administration. And similar with Mayor Hodges, we had met each other at different events. I am honored to be working for both of them because they trust me and my management skills as opposed to my political affiliations. This job is ultimately about managing the city well, and I take that very seriously. It is certainly a big and complicated job, but it’s not necessarily a political job.

MP: The city website was down for a time this morning. Was that your fault?

SC: Yes (laughs). Ultimately, IT reports to the city coordinator and we have a contract with Unisys and they had a problem in their Eagan facility. I was on the phone with our CIO (chief information officer) right when it went down to understand the problem and then communicated with all affected employees after the incident to ensure they were aware of what happened, why it happened and how we can prevent this in the future.