When the conceptual plan for developing some of St. Paul’s most prime real estate was released in March of this year, it seemed like it could check most of the boxes of any downtown booster’s wish list.

The future outlined in the plan, “Prosper: Momentum is Building,” [PDF] was especially impressive when it came to the block in the center of downtown, where the abandoned Macy’s department store site once filled a key block with mid-century mediocrity.

Instead of a windowless block of bricks, there would be glassy office and residential towers, along with a low-rise entertainment and retail complex, including a multiplex theater, a hotel, street-front shops and — if the renderings were to be believed — lots of young and fashionable people.

“While people might have called such a plan for downtown St. Paul far-fetched just a few years ago, today they simply ask, ‘How soon can we make this happen?’” Mayor Chris Coleman said in his state of the city speech that same month.

Now, six months after Coleman delivered that speech, eight months since he urged the St. Paul Port Authority to purchase the Macy’s site and a year and a half after the department store chain announced it was abandoning St. Paul, a different reality is setting in: that the old Macy’s building likely isn’t going anywhere.

It is not from lack of interest. It is, instead, the building itself. After paying $3 million for it, the port authority wanted to tear it down to make it even more attractive to prospective developers. But then came sticker shock: the engineers estimated demolition would cost $13 million.

“In a perfect world, we’d have $13 million sitting around that we had nothing else to do with,” said Lee Krueger, senior vice president of development for the port authority. “We don’t.”

Which means a site the port authority’s sale brochures proclaim as holding the epicenter of downtown remains exactly that kind of building most cities don’t want at the epicenter of their downtown —  it’s big, it’s homely, and it’s empty.

So now what? While the ongoing struggle to develop the site doesn’t change its importance to the redevelopment of St. Paul, it does raise larger questions that aren’t likely to go away, either: about struggles of retail in the city, about the evolution of the city’s downtown core (and whether the Macy’s building is itself historic); and about how involved the government should even be in real estate development.

In January, 2013 when Macy’s announced it was closing the store, many in town were surprised, said City Council Member Dan Bostrom. He said those who have been around for years remember a store once known as Dayton’s as the center of a bustling downtown retail district.

“In the 60s, there were two or three other major department stores. Downtown was bustling or Dayton’s wouldn’t have built that store there,” Bostrom said.

Yet Minneapolis retail consultant Jim McComb, who worked for Dayton-Hudson until 1974, said the store was a struggle even when he was with the company, largely due to the size of the market area “and that was when department stores had a fairly large segment of the general merchandize industry.”

That share has since lost half of its strength to discounters and superstores, he said. St. Paul is not alone in this. The day Macy’s announced the closure of the St. Paul store, it also decided to close stores in Pasadena, Honolulu and Houston. “Changes in the industry pretty much say the building is not going to be reused for retail of the type of quality they’d want in downtown,” McComb said. 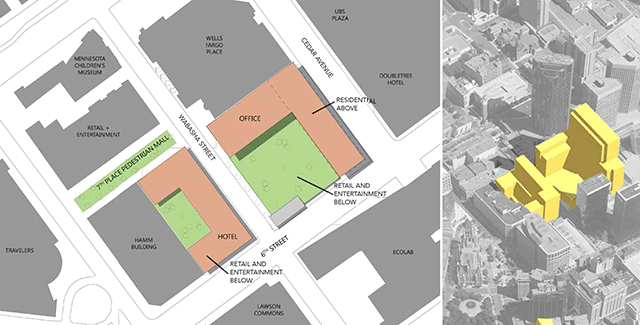 “Prosper: Momentum is Building” plan
The proposed Grace-Wabasha Court site development in this rendering “completes the historic Hamm Building block” with a base of retail/entertainment and office with a boutique hotel above.

He struggled to think of viable new uses for the existing store. That’s why he thinks the city needs to “bite the bullet on the costs of demolition.”

“Given the market conditions, having the city control that site through the port authority is not only a logical but a wise decision,” he said. “It’s a great site for something. But the great site will have to be cleared to do that something.”

When bad buildings are (maybe) historic

When demolition was a viable option, another awkward issue was being quietly debated, even at the risk of spoiling the plans contained in “Prosper: Momentum is Building,” not to mention the dreams of Mayor Chris Coleman:  Is the Dayton’s department store historic, worthy of protections afforded significant historic and cultural resources?

Victor Gruen, the Austrian-born architect who had just created Edina’s Southdale, the nation’s first enclosed shopping mall, was commissioned. The modern architect devised an inward-looking building that allowed shoppers to drive into the central city, park in the attached garage, shop and return to their cars without stepping foot on the sidewalks outside.

Downtown would battle the mall by trying to be like the mall. In his American Institute of Architects Guide to Downtown St. Paul, Larry Millett, calls the resulting building “an uninspired work.”

“When this brick box emerged from the rubble of downtown renewal it was hailed by the local press as a signal work of modern design,” Millett wrote. “Today it is hard to fathom why.” Windowless and lacking in “urban presence,” Millett wrote that it commits the ultimate sin in retail architecture: “It’s flat-out dull.” 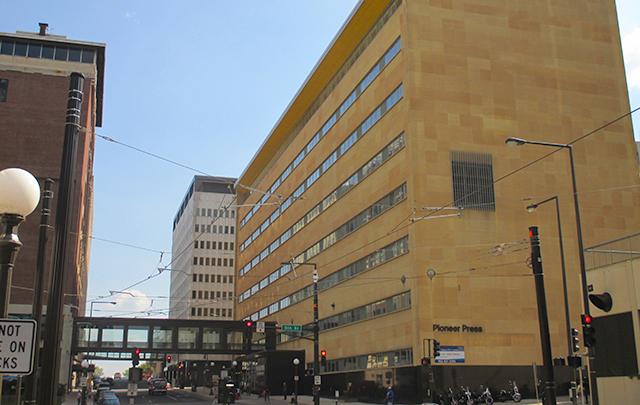 MinnPost photo by Peter Callaghan
An analysis of potential impacts of Green Line LRT construction on historic assets in St. Paul determined that the area of downtown anchored by the Pioneer Press Building could be eligible for listing on the National Register of Historic Places.

The opinion is shared by others who have learned to despise the types of urban renewal buildings that — taking advantage of vast pots of money from the federal government — were built in 1950s and ’60s to replace turn-of-the-last century commercial and retail buildings.

Edward Goetz, director of the Center for Urban and Regional Affairs at the University of Minnesota, said Gruen’s design is the opposite of current thinking about downtowns, which emphasize “walkable streets to supply the vibrancy to support all kinds of other activities.”

Goetz also finds it rich that urban renewal, which was used to demolish hundreds of historic buildings, is now itself eligible for historic status.“Urban renewal was so ahistoric that it’s kind of ironic,” he said.

But an analysis of potential impacts of Green Line LRT construction on historic assets in St. Paul determined that the area of downtown anchored by the Pioneer Press Building (formerly Minnesota Mutual Life Insurance) could be eligible for listing on the National Register of Historic Places [PDF]. Known at mid-century as Capital Centre, the nine-block area took nearly two decades to complete between 1955 and the mid-1970s, according to the Green Line analysis.

“Although few of the structures are architecturally distinguished by themselves, as a group these buildings effectively convey the stylistic and planning goals of the Modern era and illustrate an important era in the city’s history,” the report said.

One of 16 contributing structures in the district: Macy’s.

Based on that analysis, the St. Paul Heritage Preservation Commission in January urged the port authority to try to save the 1963 building. (No one has actually pursued historic designation for the area.)

How deeply should government be involved?

Shortly after Macy’s announced the closure of the store, St. Paul offered its services to expedite a sale. The port authority even offered to guarantee earnest money required by Macy’s when a San Francisco-based retail developer was taking a look at the project. But after that deal lapsed and the city feared a second developer was looking at less-desirable uses for the structure, the mayor decided to move.

“I had a developer who basically wanted to extend the parking into the building with some minor state offices,” Coleman said. So he urged the port authority to make an offer. Macy’s accepted.

The port authority has experience in turning around distressed real estate. But several people involved in the process noted that the port’s skills are with industrial properties. Downtown commercial and residential sites are not in the port’s comfort zone, which may be why it would like to turn over the development work to private interests.

“We see it as a relay race,” said the port authority’s Krueger. “We can run the first leg or two but we don’t want to finish the race.” 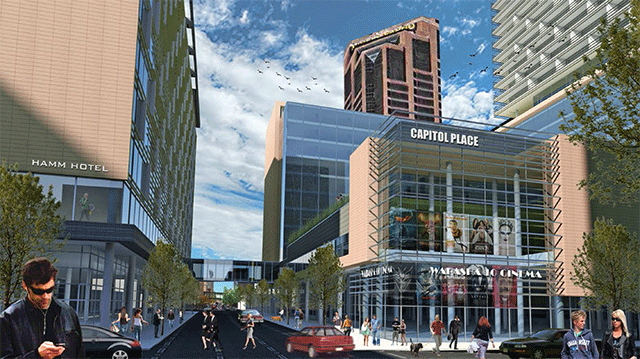 “Prosper: Momentum is Building” plan
This rendering is meant to illustrate the activity that might occur at Wabasha Street looking north.

When the race started, those first legs were to include demolition of the old store, at least before they realized the price of doing so. Still, the authority is confident it can help facilitate the right buyer and developer — as long as no one expects it to develop the property itself.

“We’ve had substantial interest in a retrofit,” said Thomas Collins, Senior Vice President of Marketing & Communications for the port authority. “We’re negotiating with several people on the site.”

But is that the role of government, to step in when private developers won’t?

Goetz, of the Center for Urban and Regional Affairs at the U of M, said he didn’t think it unusual that local government would come in financially on the Macy’s site. “Most cities are extremely concerned about the health of their downtowns and will be willing to invest in redevelopment schemes,” he said.

City Council President Kathy Lantry, one of two council members to also serve on the port authority board, said the port staff has expertise in real estate that can be tapped in this case.“It is such a critical site that control was the most important thing,” she said. “If someone comes in with a proposal, we can say ‘No, we don’t think that’s the highest and best use.’”

Lantry said she wasn’t convinced that the current building should be demolished even before the estimates made it too pricey. She said windows could be punched through the outer walls and while a possible historic designation “closes some doors, it opens others” such as historic tax credits that could help finance a project.

Coleman is quick to defend the city’s role, to point out just how important the site is to his hopes for the central city. The city has seen investment around Rice Park, where historic buildings and an expanded Ordway Center generate activity, and around Mears Park in Lowertown. “But in the center you have a concentrated zone without much activity,” he  said. As such, Coleman says it isn’t enough just to get any project there. “I just wanted the right vision.”

St. Paul and the troubles of redeveloping awkward buildings