When the U.S. Attorney for Minnesota, Andy Luger, spoke to scores of Somali-Americans Sunday evening, he was careful to emphasis one aspect of the ongoing FBI investigation into the recruitment and radicalization of local Muslims by overseas terror organizations.

“It’s my task to investigate and prosecute those who recruited the youth to go over to Syria,” Luger told a crowd of more than 60 people at the Brian Coyle Community Center in Minneapolis. “And I want you to know this is not an attack on the Somali community.”

As many as 15 Somali-American men and women have left Minnesota in recent months to travel to the Middle East and join ISIS and other militant groups, officials said.

Since reports of those departures surfaced, FBI agents have approached members of the local Somali community at homes, at work places and at schools. Officials are often seeking more information about those who have gone to fight for ISIS, those who plan on leaving and those luring them into radicalization.

“I have two children and if somebody was recruiting my children to go overseas and die, I would want the people who were doing that to be caught and put in jail,” Luger said. “My children are no more valuable than your children.”

He added: “This is something we do together. It’s not that the government is attacking this wonderful people, thriving, large community. You deserve to have this wonderful community grow and live and prosper in peace, and I want to help you do that.”

The town hall meeting touched on both the root causes of youth radicalization in the Twin Cities and sought solutions to the recruitment problems. It also gave community members a chance to vent their concerns about the government’s response.

Many who spoke at the meeting about radicalization noted that it is a complex issue — one that did not start overnight, and won’t be solved overnight.

Putting a stop to the romanticization of extremist ideologies is more than investigating and prosecuting folks, said Mohamud Noor, a community activist and Minneapolis school board member. Radicalization will always be alive so long as the immigrant youngsters remain marginalized, without access to adequate education, employment and other opportunities, he added. 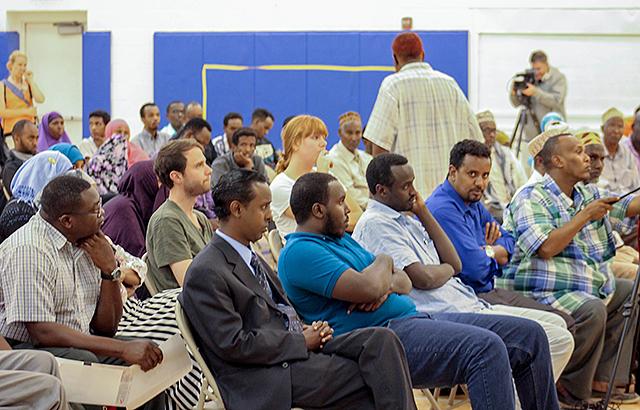 MinnPost photo by Ibrahim Hirsi
Members of the community gathered Sunday at the Brian Coyle Center in Minneapolis to discuss radicalization and recruitment issues.

“When so many young people are looking for opportunities and they’re denied … because of their color, my dear friends, there is no simple solution,” Noor said. “When we’re trying to find simple solutions to a complex situation, we’re not going anywhere.”

Activist Ilhan Omar noted the community has been combating radicalization for many years, urging officials to invest in anti-recruitment youth programs. “And it needs to happen now,” Omar said. “The longer we wait, the longer our silence will be used as a recruitment tool. The time is now. Let’s act. Let’s put our kids first.”

The Department of Justice has recently announced that the Twin Cities area is participating in a yearlong pilot program aimed to engage at-risk communities to combat recruitment of Muslim youth. Community members hope this pilot program will enable the youth to create some opportunities and integrate them into the society.

Luger said he plans to discussion solutions for the radicalization and recruitment problems with leaders in Washington next month. “The Somali community in Minneapolis and St. Paul will benefit greatly from the additional resources we expect to receive as part of the pilot program,” Luger in a statement.

“Our Somali friends deserve to prosper in Minnesota in peace and security, and this program seeks to make that happen, and create a blueprint for the country for how to prevent the radicalization of vulnerable youth.”

One issue of particular frustration to leaders and other members in the Somali-American community that’s flowered in the wake of the news about ISIS recruitment here: How Somali-Americans are treated at the Minneapolis-St. Paul International Airport. Tawakal Ismail, a Minneapolis imam, said he and others in the community have been singled out for lengthy and extensive searches by airport security, law enforcement officers and others.

As a result, religious leaders are in regular talks with the Transportation Security Administration at the airport, and Luger has pushed for the dialogue to continue between the two groups.

Yet even Lugar concedes the airport issues are unlikely to get fixed immediately. But he hopes that they will one day lead to better days, when everyone is able to travel “freely and with dignity,” he added. “That’s a commitment that your government needs to make to you.”

Minnesota is home to more than 150,000 Muslims, and the largest Somali population in the country. Over the past seven years, dozens of Twin Cities men and women have gone to join Al-Shabab, an al-Qaida affiliated terror organization in Somalia, and ISIS.

Abdirizak Bihi, a longtime community activist, organized Sunday’s meeting, both to condemn ISIS recruitments — and to underline the need for educational and employment opportunities for the youth.