Even before Adrian Peterson was charged with abusing his 4-year-old child, the team so many Minnesotans love so dearly already was considered by many as one of the more unsavory operations in the National Football League.

Given the state of the NFL, that’s saying a lot. But the Vikings’ reputation is one that’s been earned, the result of a long list of players with a variety of aberrant behaviors. Since the year 2000, 45 Vikings have been arrested for everything from terroristic threats to drunken driving, from domestic assult to assault (with a Lexus). The team’s principal owner, Zygi Wilf, once had his business practices described by a New Jersey judge as “evil.”

And now there’s a charge of child abuse.

The combination of Adrian Peterson’s “parenting” and the team’s decision to re-instate him Monday underscores the character of the Vikings organization and of the NFL. The question is whether it matters beyond the field. In a place so acutely aware of what the rest of the country thinks of it, at what point do Minnesotans care enough about the team’s behavior to make it cost them: in money, political support and fans?

Too much for Minnesotans to swallow?

On Monday, the New York Daily News published a cover photo of an un-named Vikings fan, a woman, showing up at the team’s game Sunday wearing a Peterson jersey and holding a stick. Under the photo it read: “Sick fans hail star who beat son with a stick.’’

This is not an image that most Minnesotans would want to project about the state’s values, though the woman with a stick isn’t alone in her support for Peterson. Many of Peterson’s own teammates were quick to defend his parenting style, saying they, too, had taken beatings when they were children.

Dave Mona, who is retired from a long career in sports and marketing, doesn’t believe the behavior of either the Vikings or Peterson affects how people look at the region. “Does the Ray Rice situation reflect on Baltimore?” he said, referencing the Baltimore Ravens running back cut by the team after video of him belting his fiance on an elevator was made public.

But Mona is baffled as to why the Vikings decided to re-activate Peterson after suspending him for Sunday’s game against New England. “They’re in a tough situation, but this, combined with Rice, are issues that aren’t going to go away soon,” he said. Every time Peterson touches the ball, football fans will be reminded of what he did. 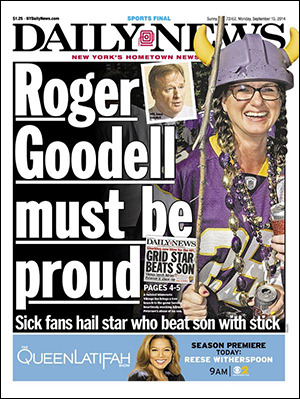 This real-life drama has the potential to play out in many ways, even politics. For months, former Gov. Arne Carlson has been arguing that the huge public investment in the new Vikings stadium should be an issue in this gubernatorial race. The public is putting up a half billion dollars in the project, which has helped raised the value of the team by 22 per cent, according to Forbes magazine. It was Gov. Mark Dayton who pushed against public opinion to get the stadium deal done, and Carlson has argued that Dayton and the legislators who supported him used smoke-and-mirrors financing to make the deal happen.

But as distasteful as massive public subsidies may be to voters, they’re also complex. Child abuse is gut level. Mix the two together and you have a bitter brew for Minnesotans to swallow.

Carlson, who continues to believe that the Dayton administration’s financial management should be at issue, thinks the Peterson case could raise purple flags on all issues surrounding the Vikings. Substantial numbers of Minnesotans may step into the voting booth with strong anti-Viking sentiments on their minds.

Beyond cynicism, a long-term impact?

Still, the biggest impact of Peterson’s behavior — and the Vikings’ response to it — will be the hardest to measure. It will be the long-term impact on fans who are asked to keep cheering for spending large sums of money on teams and players who are harder and harder to support.

Mary Jo Kane is a kinesiology professor at the University of Minnesota who teaches a sports-in-a-diverse-society course to undergrads. Kane, it should be noted, is a football fan. “I’ve always loved football, in part because it does allow respite from the realities of life,’’ Kane said.

But the constancy of headlines about the abusive behavior of pro football players is making it harder to see the game as a respite.

In her class Monday, Kane said, she saw the cynicism of young people “writ large.” Kane asked her class of more than 30 students why they believed the Vikings had decided to re-instate Peterson. The entire class, she said, believed the Vikings were quick to put Peterson back in uniform because the team was beaten so badly on Sunday. They also believed that if Peterson was not a star player, the team would have dropped him from the squad quickly. (At a new conference Monday, the Vikings’ general manager, Rick Spielman, denied that Peterson was getting special treatment because he’s a star.)

It’s impossible to know where all this leads. Perhaps the NFL will step in and overrule the Vikings re-instatement. Perhaps Peterson will play Sunday in New Orleans, rush for 200 yards and lead the Vikings to an upset victory over the Saints. “But I would think that the Midwest sensibilities, even of people who consider themselves fans, will be deeply offended,” Kane said.