On the campaign trail, GOP gubernatorial candidate Jeff Johnson often talks about his two school-aged kids, about growing up in Detroit Lakes, even about his dog, Chester. And he talks a lot about the time he spent in the Minnesota House of Representatives, where he served the Plymouth area for six years in the early 2000s.

What he doesn’t talk about much is being a commissioner on the Hennepin County Board, the gig he’s held for the past six years. In some ways it’s understandable: County boards aren’t a common launching board for statewide office, and commissioners don’t craft policies. Much of their job is managerial: overseeing things like public safety, transportation and health care, all of which is mandated by federal and state governments.

But it’s not as if it’s a small job. The commissioners who run Hennepin County, the largest county in the state, work with a huge budget and represent large constituencies. Almost 1.2 million people live in the county — nearly a quarter of the state’s entire population, and each member of the board represent about 160,000 people. (For comparison: a member of the state House represents about 36,700 people.) And with 45 different cities, more than 11,000 employees and an annual budget of nearly $1.8 billion, Hennepin County’s operations rival that of a small state. As the commissioner from the 7th District, Johnson represents the largest chunk of the county geographically, stretching from his hometown of Plymouth up to the northwestern suburbs of Maple Grove and Rogers.

In his first run for Hennepin County commissioner in 2008, Johnson pitched himself as the board’s fiscal hawk, someone who would scrutinize new spending projects and try to make county-level programs run more efficiently. “It’s a lower level of government that doesn’t get a lot of media coverage, and is not highly scrutinized,” Johnson said.

But over the last six years, that role has mostly manifested itself in  “no” votes on the county board, where Johnson is the lone conservative member, according to an examination of Johnson’s votes and interviews with commissioners who have served with him. Not surprisingly, he routinely votes no on budget proposals and levy increases. He was the only commissioner to vote against Hennepin County contributing to a bike-sharing program in Minneapolis. And in August, he was the lone no vote against approval of the Southwest Light Rail project.

In that role — at least before his run for governor — Johnson was an avid blogger, dubbing himself the Hennepin County Taxpayer Watchdog. He has given out sarcastic awards to projects considered wasteful spending, and even awarded the so-called “Golden Fire Hydrant” to projects that he finds to be particularly egregious misuses of public dollars. Among them: “garbage burner beautification” — $700,000 for landscaping at the waste disposal plant — and $14 million to make the Lowry Avenue bridge “look really cool,” he said.

“There are a lot of 6-1 votes, and he is usually on the side that doesn’t prevail,” said Mike Opat, chair of the Hennepin County Board who, it should be noted, is serving on Gov. Mark Dayton’s campaign finance committee. “He doesn’t work very hard to try and convince the rest of us to move any of our positions. I don’t know if he considers that a productive use of his time.”

Yet Johnson says he’s more than just a no vote. “If my only role is to vote no and lose, it’s really kind of a waste of my time. I do feel that I’m able to point out where we are not being all that effective with taxpayer money,” Johnson said. “It’s important to find that happy medium in the minority. Some would be satisfied just being the bomb thrower, but that has never been my style. I’ve tried to find that balance between being the sole no vote and actually working with members to accomplish things.”

Instead, Johnson said, he picks his battles so he can also get things accomplished on the DFL-dominated board, and he ticked off a handful of issues where he lives up to his promise to be a fiscally prudent voice on the board while also trying to move things forward:

As chair of the county’s public safety and judiciary division, Johnson has been on the ‘yes’ side of other projects that have cost money. In March of 2012, for example, Johnson supported a successful resolution putting temporary weapons security screenings in suburban court buildings for safety. The screening equipment cost hundreds of thousands of dollars to the county.

Working closely with Hennepin County Sheriff Rich Stanek, Johnson has also been looking at examples from around the country about how to keep people leaving the county jail from re-committing crimes. “He is very pro-public safety,” former Hennepin County Board Chair Mark Stenglein said. “He wanted to make sure the residents of the county were kept safe, and you saw his tune change on issues in that area.” 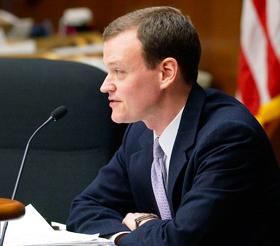 A vote on public safety is also one of Johnson’s few regrets while serving on the board, he said. He initially supported a request from the Hennepin County Sheriff to spend $426,150 to obtain the so-called KingFish cell-phone tracking technology. Johnson said the tool had been successful around the nation, particularly in tracking victims in child abduction cases, and he felt he had proper assurances from the sheriff’s office that there were strong personal privacy protections in place.

But news broke ahead of the 2014 legislative session that law enforcement needed only a court order to intercept large swaths of cellular phone signals. Lawmakers held hearings and questioned law enforcement over their use of the technology, including information about how long they stored location data collected from cell phones.

“In 2010 when I supported the Kingfish purchase, I was confident it was the right thing to do,” Johnson wrote in a Facebook post about the vote. “Experience, however, is a tough teacher. Since 2010 a trickle of stories of government abuse of technology has turned into a flood. Nationally, we have NSA surveillance tactics that, under the guise of security, infringe on privacy rights and civil liberties. Locally, we have widespread unauthorized and unwarranted access of individual data in state databases. These abuses can’t be ignored. Given that experience, I would not support the Kingfish purchase today.”

Overall, Johnson’s colleagues say he’s straightforward and easy to work with, though most say his level of engagement with other commissioners is far less than his predecessor on the board, Penny Steele.

“I’m sitting here trying to think of an issue he’s taken a lead on,” said 2nd District Commissioner Linda Higgins, who represents part of the city of Plymouth alongside Johnson. “I can’t think of anything too major.”