One of Minneapolis’ weirdest laws is played for comic effect in a new campaign video: When a couple (played by former Mayor R.T. Rybak and his wife, Megan O’Hara) are served wine and beer at a neighborhood restaurant before they’ve ordered dinner, “Inspector Downer” cuffs the bartender for violating the law.

Funny. But it would be a lot more enjoyable for those seeking passage of Minneapolis Ballot Question No. 2 if it weren’t true.

It is true, though: The Minneapolis city charter not only requires that restaurants outside of downtown “and large commercial corridors” receive 70 percent of revenue from food and non-alcoholic beverages, it dictates that patrons must order food if they want a beer or glass of wine.

And as if that’s not enough, the city also requires that same beer or wine may only be served to patrons “seated for regular dining that have ordered or have been served a meal.”

In other words, that waiter taking your order before getting you a drink? He might not being trying to move you along; he might be just trying to follow the law.

“It irritates the customers,” said Molly Broder, who owns the 20-year-old Broders’ Pasta Bar at the corner of W. 50th Street and Penn Avenue S. and, with her sons Thomas and Charlie, the recently opened Terzo Vino Bar across the street. “They think you’re rushing them.”

Kathryn Hayes, co-owner of Anchor Fish and Chips in Northeast Minneapolis, pointed out another problem. “Friday night we had a two-hour wait,” she said. People “want to have a beer while they’re waiting.” According to the city law, they can’t.

For owners of the 70 restaurants covered by city’s rules governing how alcohol can be served in neighborhood establishments, the requirement that dinner be ordered before beer and wine can be served is a minor irritant, one that is frequently overlooked.

But another rule, the one that states that those same restaurants can earn no more than 30 percent of revenue from alcohol, is different: a real problem that is becoming more of one. It’s also the catalyst behind a decision by a group of restaurant owners, employees and patrons to form Citizens for a Modern Minneapolis, which — under the banner of the “Vote Yes on 2” campaign — is seeking to repeal the city’s 70/30 law.

Blame fine wine and craft beer, or at least restaurant goers’ desires to order them with a meal. These days, a burger and a craft beer might be the same price, which means that if you sell enough of those beers, the 70/30 ratio is already out of whack. Even a meal at a restaurant with higher-priced entrees can quickly get outside the ratio if diners buy a bottle of wine. And though the law states that not every single meal must conform to the 70/30 ratio, the restaurants governed by the rule must account for their sales breakdown at the end of each year in order to be relicensed. 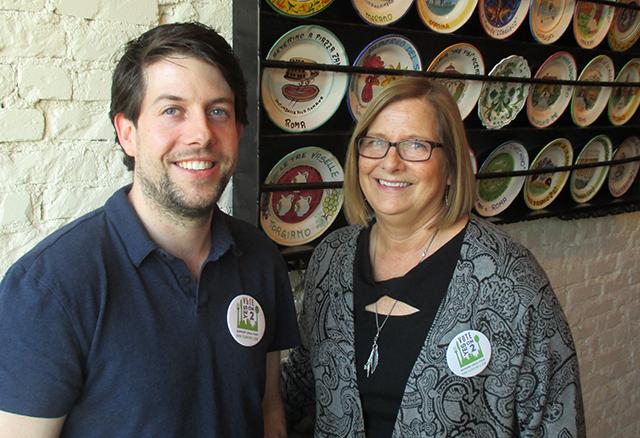 Broder has been part of the city’s restaurant scene — and the battles over the often-arcane alcohol rules — for three decades. When she and her late husband, Tom, opened Broders’ Pasta Bar in 1994 across the street from their Cucina Italiana deli, the neighborhoods were alcohol-free zones, “dry” in the parlance of Prohibition.

“A pasta place without wine? Please!” Broder said, recalling the restaurant’s early days. They succeeded in getting a beer and wine license a year later, when a state senator included it in the omnibus liquor bill in the Legislature. And they soon began campaigning for a change in city law to allow beer and wine in neighborhood restaurants.

An unintended consequence of a restaurant revolution

The charter change, which went into effect in 1997, included the 70/30 rule, Broder recalls, because someone in city hall wanted to demonstrate that the rules would be strict and to calm concerns in the neighborhoods that the new neighborhood restaurants wouldn’t evolve into rowdy bars.

But they weren’t based on the real life of a neighborhood restaurant, mostly because there were hardly any neighborhood restaurants at the time. It’s a much different story today, when among the 70 restaurants governed by the rules are some of the city’s best known, and most beloved, establishments: Alma, Corner Table, Grand Cafe, Victory 44, Tilia, The Kenwood, Birchwood Café, and — icon of iconic Minneapolis neighborhood eateries — Matt’s Bar.

Not that the 1997 charter change was all bad. It paved the way for what Rybak calls a “restaurant revolution” that — along with two other measures: the so-called Surly Bill, which permitted craft breweries to sell their beer on site, and liberalized regulations on food trucks  — dramatically changed the city’s food scene. “Think how much more lively we are,” Rybak said.

All of which could be at risk if the charter question fails, according to backers of the “Yes on 2” campaign.

Perhaps this is a good place to stop and try to explain the city of Minneapolis’ highly complex liquor regulations. While any description is an oversimplification, when it comes to booze, it’s best to think of the city as having three distinct zones: downtown; large commercial corridors (think Lake Street, Hennepin, Central and University); and neighborhoods.

Downtown has long been considered the area where alcohol, including hard liquor, could be available — an area where there were few residences that might be disturbed. Then there are large commercial zones, defined in law as districts with seven contiguous acres of commercially zoned property but close to residential areas; restaurants in those zones can have bars and serve hard liquor as well as beer and wine. And until last month, those restaurants could earn no more than 40 percent of their revenue from alcohol.

Because the 60/40-ratio law governing large commercial zones was contained in city code, it could be changed by a council vote — and recently was. But the 70/30 rule regarding neighborhood restaurants isn’t. It’s contained in the charter. That means a vote of city residents is required. To pass, 55 percent of those voting must approve the change.

Is Minneapolis so different than anywhere else? Well, yeah. In St. Paul, for example, as long as an establishment has a restaurant license and is more than 300 feet from a school or church, it can get a full liquor license, which includes the ability to sell hard liquor. Dan Niziolek, the deputy director of the St. Paul department of safety and inspections, said the city still requires that 60 percent of a restaurants sales be in food, that could change now that the state no longer requires it.

The video for the “Yes on 2” campaign featuring Rybak and O’Hara personifies the city of Minneapolis as “Inspector Downer” (played by well-known chef and Tilia co-owner Steven Brown; the ubiquitous Sue Zelickson has a supporting role). But city staff has been supportive of making changes to the 70/30 rule.

When backers of the change weren’t able to collect enough signatures to force it on the ballot — according to law, they would have had to get more than 10,000 signatures — the city’s charter commission placed it on the ballot on its own vote. And city licensing staff have been working with restaurant owners citywide to develop a new regulatory scheme aimed at preventing any problems that could come up.

Council Member Linea Palmisano, who represents Southwest Minneapolis, where many of the 70/30 restaurants are located, worked with a task force of city officials and restaurant owners to craft the new methods of regulating alcohol. “There really was an opportunity to make this set of new tools that everyone around the table agreed would be fine, that wouldn’t constrain businesses — except maybe the bad actors out there,” she said.

She and Council Members Elizabeth Glidden and Jacob Frey led the push to replace the old rules and she said she hopes voters will approve them. “The restaurants are the cornerstones of our neighborhoods,” Palmisano said. “Let’s welcome them in.”

“I will say people are nervous,” Council Member Cam Gordon said last month before voting for the replacement regulations. “There were people who, I think unrealistically, thought the ratios brought some reassurances and some protections about over-serving, serving minors, turning a restaurant into a bar.”

Not all of the city’s 70 neighborhood restaurants have trouble meeting the ratio. Those open for breakfast and lunch can usually make the numbers, Broder said.

Hayes said that Anchor’s take-out business and its weekend brunch does help bring the food totals up. And they have beer and wine prices that are lower than many others. But even with that, she and her partners are right on the edge of the ratio. “We make it by the skin of our teeth,” Hayes said. “If we put the price of our beer up and didn’t put the price of food up we’d be in trouble.”

But those who prefer to offer only dinner service often have a tough time reaching the 70 percent in food sales. “If I had it to do over again with Terzo, I wouldn’t have opened up here,” Broder said, estimating the restaurant’s food-to-alcohol ratio is in the 50/50 range. “And if this doesn’t pass, I’m going to have to reconsider.”

The backers of the Vote Yes on 2 campaign know the details of the charter and ordinances can be confusing and arcane. So backers are trying to use humor and stressing the fact that small restaurants are locally owned, use local ingredients and — especially in the case of craft beer — sell local beverages.

Does a boring ballot question hold the key to sustaining Minneapolis’ restaurant boom?