The image of historic buildings often brings to mind brick and stone, heavy timber beams and the stories they could tell.

But the discussions around preserving those buildings through reuse often boil down to more prosaic terms: sashes and mutins, glazing and reveals.

In other words: windows.

It turns out that the preservation of landmark buildings is dictated as much by what we see through as what we see. Yet making those windows both authentic and efficient is often a source of conflict between owners and those charged with protecting and maintaining the historic character of buildings and neighborhoods.

“Windows are far and away the most sensitive and debated feature in the preservation world,” said Michael Sullivan, a preservation consultant in Tacoma, Washington who’s also an adviser to the National Trust for Historic Preservation.

And in Minneapolis, nothing illustrates that tension more than the current struggle over one historic building — and 36 windows — in the city’s North Loop neighborhood.

A window into preservation conflicts

The Lerner Building is a nearly century old structure at 241 1st Avenue N., which is not only designated historic, but is considered a contributing structure to the Warehouse Historic District (itself included on both the national and city historic registers). For all that, though, the structure might be best known from its rear façade, the part that faces Hennepin Avenue and is decorated with a large “ghost sign” of a 7-Up bottle.

As with all buildings designated historic in Minneapolis, the Lerner Building’s exterior facades and features are protected by city ordinance. Any alterations must be approved by the city Heritage Preservation Commission. Windows, the district design guidelines say, “are an important character defining feature of existing buildings.”

Those guidelines are based on the U.S. Secretary of Interior standards, the bible for preservation in the United States. Renovations and restorations not done according to the standards not only run afoul of local rules, but can make a project ineligible for historic tax credits.

And according to city standards for historic buildings, original materials can be replaced only when they are “too deteriorated to provide a sound building envelope.” New windows must be “compatible in material, type, style, operation, sashes, size of lights and number of panes” or the windows being replaced.

That can be problematic, not to mention counterintuitive, for building owners, who are often taught that old windows are energy hogs and that replacing them is the environmentally responsible thing to do. (This despite the fact that an analysis of windows done by The National Trust for Historic Preservation’s Green Lab in Seattle found that “that a number of existing window retrofit strategies come very close to the energy performance of high-performance replacement windows at a fraction of the cost.”)

Preservationists all over the country are often forced to confront these mixed messages, which is especially tough when those messages come from government itself. In fact, sometimes one government entity is subsidizing window replacement while another is demanding that windows in historic buildings be restored.

The issues with the Lerner Building starter earlier this year, when Adam Lerner, the building’s owner, installed 36 new windows in the structure — without city building permits, and without getting the necessary approval by the preservation commission.

And once the preservation commission found out about the windows (thanks to some city inspectors), that’s exactly what it told Lerner they wanted him to do.

“If we start making exceptions for, albeit a mistake and unfortunately a very costly mistake for you, we set a precedent that becomes problematic for us and for the City and it’s just something that we can’t do,” Commission Chair Laura Faucher said at the preservation commission’s September meeting. “We have to uphold our ordinance.”

The problem for Lerner: Getting rid of those 36 windows he’d already installed and putting in the new, commissioned-approved style would run about $100,000. 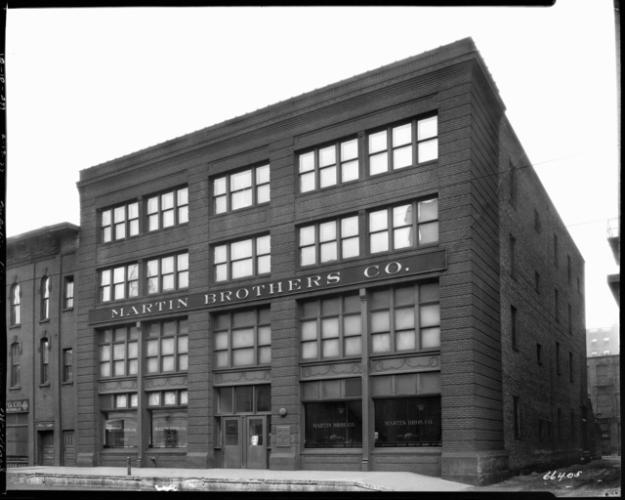 Courtesy of the Minnesota Historical Society
A 1927 photo showing the Lerner Building when it housed the Martin Brothers Company.

So last week, Lerner went before the City Council’s Zoning and Planning Committee to ask them to overturn the Heritage Preservation Commission’s previous ruling. Instead, Lerner proposed a compromise: He would add a narrow metal strip to the glass to give the appearance that the windows were like those that had been on the facade before the project began. “As a responsible citizen it is hard for me to stomach throwing away extremely functional windows,” he said.

The majority of committee members were not moved. Committee Chair Lisa Bender said she considered the difference between the historic windows and the replacements “really striking.”

Faucher said Friday that windows are a frequent issue before the commission because home and business owners think the only way to increase efficiency is to replace. But Faucher, a preservation architect, said repairs can make existing windows work better. And most commissioners will allow either interior or exterior storm windows.

In fact, rarely has the commission approved replacement of windows that are salvageable, she said. And replacements are carefully reviewed to make sure they do not change the look of the building.

In the end, the council committee voted 4-2 to deny the appeal. It will now go before the full council on Friday.