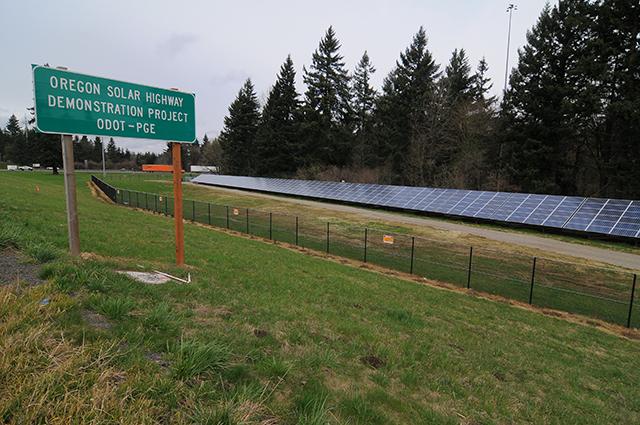 Minnesota’s highways are poised to become green energy generators with up to five 1-megawatt solar panel arrays built on public right-of-way around the state. If the pilot project proceeds as planned it would exceed the total capacity of a solar installation at Minneapolis-St. Paul International Airport expected to go online next fall and touted this month as the largest in Minnesota.

The state Department of Transportation is soliciting proposals through Nov. 3 for solar developers to lease land along highways that they would select for the installations. MnDOT, with expertise in pavement and bridges, is leaving most of the solar details to experts in that field.

“We don’t even know how many potential solar sites we have,” said Rick Morey, the agency’s project manager. “We’re looking for a simple landlord-tenant relationship.”

Once sites are suggested, MnDOT would determine only that they had no potential impacts on traffic operation and safety, then negotiate a fair market rental rate required by state law. Leases will extend 20 years, four times longer than most roadside rentals but considered necessary to allow a return on the heavy investment in solar arrays. MSP’s 3-megawatt facility, for example, will cost $25.4 million, but is expected to net $10 million in benefits for the airport over 30 years.

MnDOT recently launched an agency-wide push to increase revenue from roadside rentals, which dipped just below $400,000 in fiscal 2014 from the peak a decade ago of about twice that, said Bonnie McCabe of the agency’s land management office. Most existing leases are for farming or commercial parking, she said. Counties get 30 percent of the money in lieu of property taxes; the rest goes to the state Trunk Highway Fund.

The solar initiative developed separately in response to inquiries from “a couple of companies,” Morey said. They are expected to focus on south-facing highway embankments large enough for a 1-megawatt array, at least one acre. Many highways also are routes for power lines, which solar installations could plug into.

“People can’t do much else with that land,” Morey said. “We can do this and generate some energy and revenue and improve the environment, to boot.”

Similar roadside solar projects have been pioneered in Oregon and Europe. While MnDOT says it will not buy any power generated on its property or guarantee such agreements with utilities, “they likely will be interested in talking to the successful responders,” according to an agency Q&A sheet.

State law requires electric utilities to increase their generation from renewable sources over the next two decades, and Gov. Mark Dayton’s 2011 executive order directs state agencies to take greater steps toward a goal of reducing greenhouse gas emissions 80 percent by 2050.

MnDOT “deserves a pat on the back,” said Mark Andrew, a former Hennepin County commissioner and founder of GreenMark, an environmental marketing firm that is a partner on the just-announced MSP solar arrays atop Metropolitan Airports Commission parking ramps. “Every public agency should be doing solar projects, because now there’s an opportunity to do it at no cost to the taxpayer.”

One challenge the initiative may face, however, is finding sites large enough for a 1-megawatt – 1 million watts – array, Andrew said. Usually that requires 5 acres, not the 1 acre suggested by MnDOT, he added.

How Minnesota’s highways are poised to become renewable energy generators