Minneapolis will continue to plan and seek money for streetcar lines and bus rapid transit routes aimed at better connecting existing and future transit projects with areas of high poverty and high numbers of transit users.

The city will also keep pushing the Metropolitan Council and the state to fund transit improvements that will help the regional system better serve poor and minority residents.

Those were among promises delivered Tuesday in response to requests from the Equity Commitments Coalition for Metro-wide Transportation, a group of minority, religious and neighborhood organizations that was formed to assure that people of color benefit from transit projects in the Twin Cities.

The city council promised to respond to the coalition’s concerns in August, after it approved the controversial route to extend the Green line to Eden Prairie via the Kenilworth Corridor.

“Addressing the gaps through and around transit-oriented development won’t in itself close these racial and economic disparities,” said Peter Wagenius, policy director for Mayor Betsy Hodges. “But we can’t reduce these disparities without a significant transportation component. We can’t have inclusive growth without a transportation system that works for all.”

The city, however, doesn’t deliver transit services, the Met Council does. Nor does it make the decisions about those services — those are made by the state, the Met Council and a handful of other boards and commissions. The city’s primary role, therefore, is in advocating for its residents, Wagenius said. 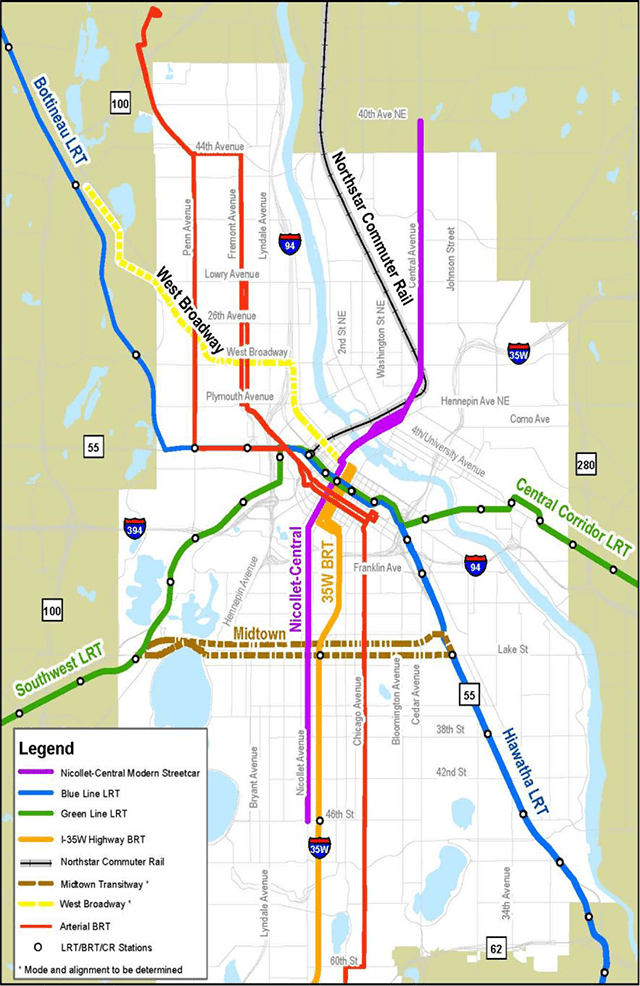 Wagenius told the council that serving transit-dependent neighborhoods and people of color would have been easier had the Met Council chosen an alignment south down Nicollet Avenue and then west through the LynLake and Uptown neighborhoods. Such an alignment also would have made a second goal of light rail easier — economic development around stations.

The purpose for revisiting the alignment decision wasn’t to reopen a now-closed debate. Instead, it was raised to demonstrate why the city thinks it is vital to build better connections among existing and planned light rails lines and North Minneapolis, along with areas that would have been better served by the Nicollet alignment.

“Southwest LRT should not be an end in itself,” the city’s report states. “It should be a spine of a broader network including many, more frequent regular local buses, several faster Enhanced Bus or ‘arterial BRT’ lines and modern streetcars on a few key corridors where economic development and job growth is essential. … If the region does not make these investments in transit connections, the limitations of the Kenilworth alignment will be magnified and the project will be less successful.”

Among those investments being studied, a proposed Nicollet-Central streetcar is the furthest along, though the city has not secured the $200 million it would need for the project. That line initially would run from the K-Mart that blocks Nicollet at W. 29th Street to Northeast Minneapolis via the Hennepin Avenue Bridge. Other lines in the planning process could travel on West Broadway in North Minneapolis and along the Midtown Greenway to connect the existing Blue Line at Lake Street Station and the proposed Southwest LRT line at West Lake Station.

The city’s response to the Equity Commitments Coalition also endorsed calls for more heated bus shelters in North Minneapolis, a cause helped last week by a $3.26 million federal grant. The city also promised to invest in city programs that would boost investment along transit lines, providing economic opportunities for low-income residents and people of color. And it pledged to push for mixed-use and mixed income development around the Southwest LRT stations within the city.

Of those, however, only one station, Van White, has near-term potential for transit-oriented development, Wagenius said. And it has limitations caused by the existence of the city’s impound lot, school bus storage facility and maintenance yards for future intercity trains. 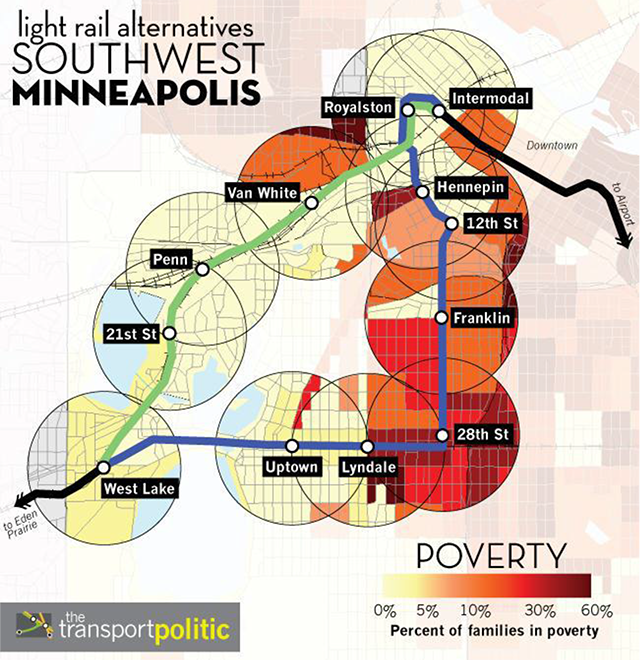 Russ Adams, executive director of the Alliance for Metropolitan Stability and a member of the equity coalition, gave the city’s response good marks but with some reservations.

“There are parts in it that are very promising,” Adams said. “It appears that the city wants to lead on providing affordable housing options, on exploring new economic development strategies and connecting workers to jobs.”

Adams said the coalition agreed with the plan to use streetcars and improved bus connections to make the new line work better for neighborhoods not directly on the line. And the group has long called for better and more numerous bus shelters in inner city neighborhoods.

“The area where we feel they fall short of their rhetoric is on the Van White Station redevelopment,” he said. The city needs to explore options for moving the impound lot to clear up development space and he didn’t accept that the city must allow commuter rail storage in the area. The area has long been a “dumping ground” for undesirable land uses and residents want both the LRT line and the high-density redevelopment and housing that should come with it.

Adams said it is helpful that the city proposes shrinking the impound lot and reducing the acreage for the train storage but they will remain under the city plan. “It feels like they’re continuing to be a dumping grounds and if the city is committed to equity and not repeating the mistakes of the past they can start with the Van White Station.”