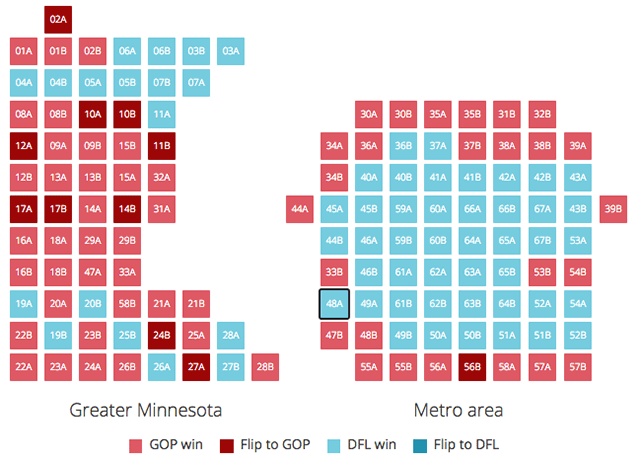 The GOP picked up 11 seats and won control of the Minnesota House. For more details on where they made their gains, see: ‘Visualizing where the GOP made its gains in the MN House‘

The Republican Party of Minnesota’s election night celebration was a rather dull affair — until about half past midnight.

That’s when House Minority Leader Kurt Daudt strolled into the Loews Hotel in downtown Minneapolis, representing the party’s biggest victory of the 2014 campaign — control of the 134-seat Minnesota House of Representatives.

“I’m very proud to announce we are putting an end to single-party DFL control,” Daudt told a dwindling-but-elated crowd of Republicans gathered at the hotel.

Up to that point, there had been little to cheer for Minnesota Republicans. Within minutes of polls closing, the DFL’s Al Franken had been declared the winner in the U.S. Senate race. Not long after, DFL Gov. Mark Dayton was also projected to win re-election. And by the time much of the crowd had begun to pack it up for the night, the GOP knew it had lost all three constitutional office races and two competitive congressional contests.

But as the hours ticked by and results in rural and outstate districts started rolling in, the focus shifted to Minnesota House Republicans (the state Senate is not on the ballot again until 2016). They needed a net gain of just seven seats to regain control of the lower chamber.

They got that and more. In all, the GOP picked up 11 seats, making most of their gains in rural and outstate Minnesota districts. When all the votes are tallied and finalized by the Secretary of State’s office, Republicans will have likely moved from a 73-61 minority to a 72-62 majority.

“It really was a metro-rural split tonight,” Daudt said of the result. “A lot of these rural Democrats came to St. Paul and voted with the Minneapolis and St. Paul Democrats and unfortunately they paid the price in their districts.”

DFL House losses spanned the state, from two seats in Crow Wing and Aitkin counties, all the way to Albert Lea, St. Cloud and Burnsville. Many suburban races were very close, and at least one is headed for a recount: DFL Rep. Yvonne Selcer won her race over Republican Kirk Stensrud in the Minnetonka area by just 36 votes, a total that falls within the 0.5 percent threshold for an automatic recount in Minnesota.

After two years in complete control of state government, rural DFLers faced a gauntlet of tough issues this cycle, Daudt said: Spending, MNsure, and even the sales tax on agriculture equipment repair sales, which was ultimately repealed by Democrats.

It’s possible a tough “yes” vote on legalizing gay marriage in 2013 also cost some rural representatives their seats. “It certainly, probably played a factor in those districts,” said Daudt.

Daudt expected to be next speaker of the house

Control of the Minnesota House has flipped back and forth between parties over the last three election cycles, but most insiders were still guessing at the last minute about what would happen this cycle. Wave elections flipped the House from blue to red in 2010 and back to blue in 2012, but most voters showed little enthusiasm for either party as candidates knocked on doors this summer and fall. 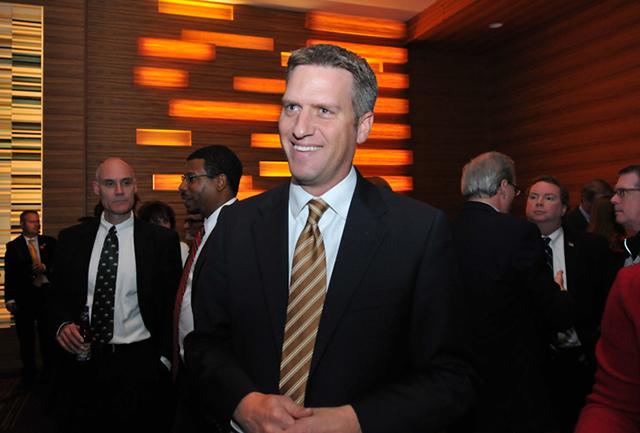 Daudt, himself a rural representative from Crown, Minnesota, is the likely leader of the new rural-dominated Republican caucus. His members will meet Friday to elect the next Speaker of the House, and Daudt is unaware of any challengers to his bid.

He faces the prospect of having to work with a DFL governor and a DFL-controlled Senate next year on major issues like transportation funding and the troubled sex offender treatment program. But Daudt said he’s always had a reputation as  someone who can “work across the aisle” if need be.

Here, a look at the House seats that flipped from DFL to GOP control: