The Riverview Corridor, once in line to be the one of the Twin Cities’ first mass transit routes, isn’t back from the dead quite yet. But the long-studied corridor, which runs from St. Paul’s Union Depot to the airport and Mall of America, is at least showing signs of life.

A decade and a half after falling victim to neighborhood objections and recession-era budget cuts — and just months from being targeted by the Metropolitan Council as an East Metro bus rapid transit corridor — it has been resurrected for a broader study of how to expand transit.

It could still end up being served by bus rapid transit, often referred to as BRT. It could also be designated for light rail, however. That’s what changed when Ramsey County decided to take a more-comprehensive look at the questions of which mode would best serve the area, and which route would work best.

“People asked, ‘How come you guys don’t get together,’” said Ortega, who also serves as the chair of the county Regional Rail Authority, which is the lead agency for the $1.5 million analysis.

Few doubt the potential for ridership and economic development. Each study of transit options — street cars, bus rapid transit and light rail — has placed it near the top of finalist lists. It has the population and employment numbers that meet thresholds for more transit investment. And the potential for development of the Ford plant property makes it even more intriguing for transit planners. But its history causes some to worry that time and money might be spent, once again, without much result.

The 12-mile corridor connects the eastern termini of both the Blue Line and the Green Lines, completing the triangle formed by downtown Minneapolis, downtown St. Paul and the Mall of America. Ortega was in office when this corridor was first studied in the late 1990s.

“Twenty years ago I said this is the most-important corridor for St. Paul,” he said of the area that includes Lowertown, downtown, Upper Landing, the West 7th Neighborhood, the Highland Park Neighborhood, the airport, Bloomington’s South Loop and the Mall of America. Ortega said he thinks it could have a bigger economic impact on St. Paul than the Green Line.

The technical name for the process is the Pre-Project Development Study [PDF]. By late 2015, the rail authority will have identified the locally preferred alternative, including a favored route and the mode, likely either rail or bus rapid transit. Given the long timelines for such projects, Riverview would get in line behind the Green Line southwest expansion to Eden Prairie and the Blue Line northwest expansion known as Bottineau. A Riverview light rail line could be a decade away, while a BRT service could be on-line much sooner. Much of the corridor is currently served by Metro Transit’s No. 54 bus, a limited-stop route.

A lot of the study involves numbers — population growth estimates, employment growth estimates, engineering analysis, cost estimates. But Ortega said an important part also is hearing from residents and businesses and making sure they are included in the process.

“Ridership? I’m not worried about that,” Ortega said. “But when you deal with people’s emotions, it’s different. Last time on Riverview we didn’t do a good job with the community.” 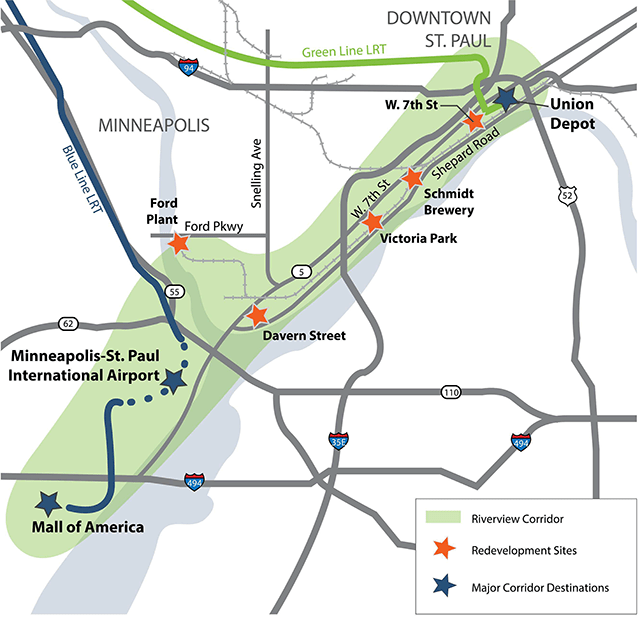 Back then, objections surrounded lost parking, congestion on the arterials used by transit and disruptions from construction. “How does it benefit us or is it just a fly-through for ‘those’ people who want to take our jobs?” is how Ortega characterized some of the opposition.

At an open house for the project at Union Station last month, Ortega encouraged more community participation in the process. “Rather than play defense and talk about what we don’t want, try to visualize what you want,” he said.

St. Paul City Council Member Chris Tolbert, whose Ward 3 includes parts of the corridor, thinks enough has changed in attitudes about mass transit since 2000 that residents will be willing to support transit improvements.

“I was in high school when the last planning went on,” Tolbert said. “There wasn’t a light rail line then. Now people have seen it and they think, ‘Hey, this is pretty good.’” Tolbert said he also thinks with more people living in downtown St. Paul, and with the potential of the 130-acre Ford site, that there is more economic development potential from a single-ride connection between existing employment centers downtown and the Mall of America area.

“It’s really a perfect time to be taking another look at this,” Tolbert said.

The Met Council transportation planners had been working on making this corridor the second arterial bus rapid transit route in an expanding use of that system. It was set to open in late 2016, but the Met Council was asked to delay plans to construct what was designated the B Line to allow the broader study to be completed. BRT had been the locally preferred alternative in 2000 until planning and study money was cut at the capitol.

The next BRT service — the A Line that runs down Snelling Avenue before heading west on Ford Parkway and 46th Street — will intersect both the Green Line at Snelling Station and the the Blue Line at the 46th Street Station. It is now being designed with construction starting in spring, with the service open for passengers late next year. The second BRT project will be the C Line, which will  travel between the Brooklyn Center Transit Center south along Penn Ave North to Olson Memorial Highway and into downtown Minneapolis utilizing 7th and 8th Streets.

BRT is, as the name suggests, a bus service that is enhanced to increase both speed and comfort. The buses have wider aisles and more doors. They run more frequently and stop less often. To speed commutes, BRT buses can receive signal priority and fares are paid at the station, not on board. Stops come after signals to reduce the need to stop again at signals after passengers board. Curb extensions or bulbs give more space for station amenities such as real-time departure signs, heated shelters and enhanced security. The extensions also mean the bus does not have to move over to the curb to pick up riders, which also eliminates the need to merge back into traffic after stops.

The A Line will share regular vehicle lanes, but the planned Gateway Corridor that will run between St. Paul and Woodbury will use a dedicated busway adjacent to I-94. BRT is cheaper and quicker to build: the A Line will run 10 miles and cost $25 million to complete, while the B-Line had a cost estimate of $28 million, said the senior manager of Metro Transit’s BRT office, Charles Carlson.

The Gateway Corridor has a budget of $500 million, and the designated Orange Line — which will run on I-35W between Minneapolis and Burnsville — will cost $150 million, mostly for station construction. By comparison, the Southwest LRT extension from Target Field to Eden Prairie carries a budget of $1.6 billion.

Light rail, however, has greater passenger capacity and can be faster than BRT. It is also considered more attractive to commuters, and therefore has the potential to bring in more riders. And it can have greater economic development potential, especially around stations.

Cole Hiniker, senior transportation planner with the Metropolitan Council, said the choice of mode and alignment is a local decision. “They pick the one that meets their needs,” Hiniker said.

But with the success of the Blue Line and the Green Line — both are exceeding ridership estimates and both triggering new development — why wouldn’t every  group of local governments seek light rail? Hiniker said the region has limited resources and must be careful not to overbuild for a given corridor’s needs.

“Light rail is significantly more expensive and has a lot more impacts,” he said. It can take over traffic lanes and often requires purchase of additional land. Sometimes, like with the proposed Nicollet-Central Avenue corridor in Minneapolis, there just isn’t enough room for light rail.

“If we had light rail everywhere, we’d run out of corridors where we could build,” Hiniker said. “BRT allows us to invest in more areas. BRT is a form of bus and there is a desire to improve the bus system, not just BRT,” he said. “Eighty percent of our riders today are on buses.”

Does the future of the Riverview Corridor include light rail?